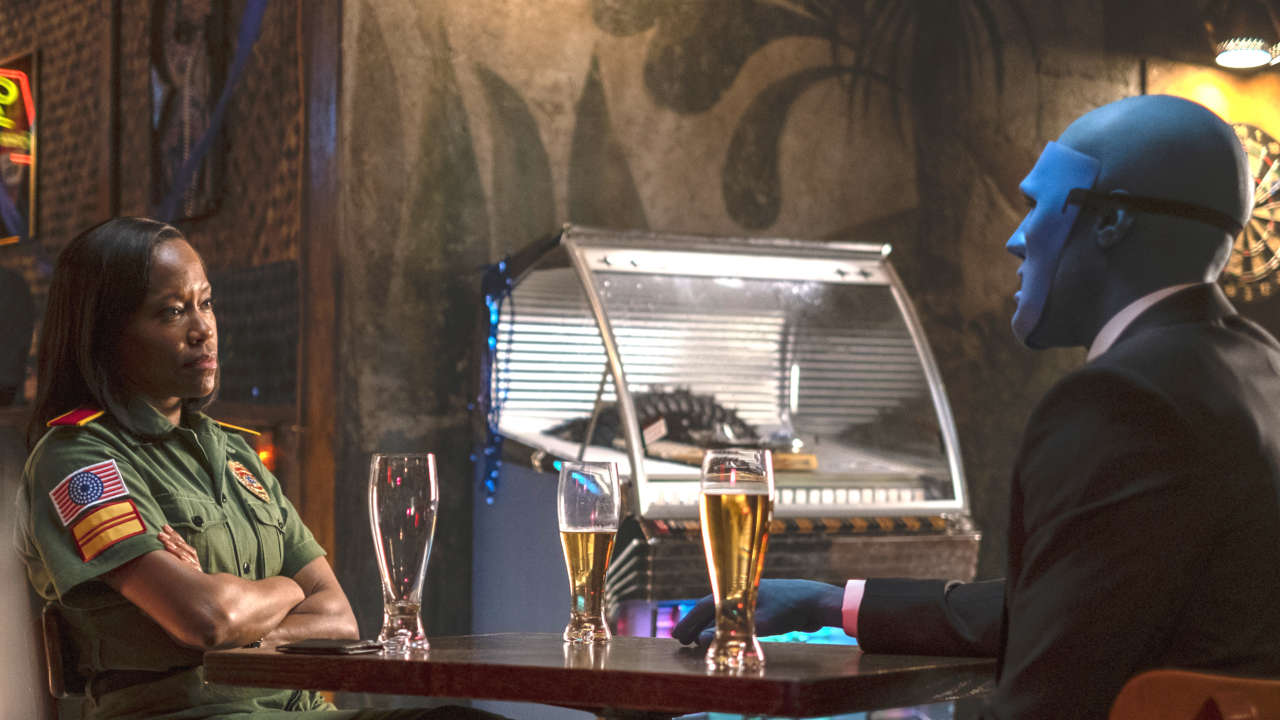 The elevator pitch for Watchmen‘s eighth episode is relatively simple: what if Dr. Manhattan is to Watchmen, what Desmond was to LOST? A person unstuck in time, whose ability to move back and forth across the key moments of their lives, opening their minds to a wealth of experiences, perspectives – and of course, deep regrets for the moments and things that cannot be changed. LOST‘s 77th episode, “The Constant,” uses time as a thematic anchor for a love story, the absolute apex of science-fiction romance – a man who is only able to hold onto his identity by remembering the woman he loves.

“A God Walks into Abar,” and the love story that plays out within it, is among the most heartfelt entries of Lindelof’s career, able to carefully turn a seemingly indecipherable character, into something beautifully textured, human, and meaningful.

“A God Walks into Abar,” co-written by Damon Lindelof (who wrote “The Constant” with Carlton Cuse) and Jeff Jansen (a writer who once wrote LOST recaps for Entertainment Weekly), is pretty much a direct successor to “The Constant”; but though it is explicitly familiar in its structure, characters, and thematic explorations, is still a wildly successful, abundantly rewarding entry all to itself. Where “The Constant” served as an important fulcrum for the emotional journey of a mysterious character, “A God Walks into Abar” uses Dr. Manhattan’s gravity to pull in every loose thread of the series, while also telling a touching, tragic love story: it is a rather impressive feat, firmly establishing Watchmen‘s first (and only?) season in the pantheon of modern adaptations (and a gentle reminder of why Watchmen is so much fucking better than The Boys, I might add).

Perhaps the most impressive thing “A God Walks into Abar” accomplishes is understanding Dr. Manhattan as a character, and how to effectively convey the paradox of his continued existence, in ways even the comic struggled to contend with. He is a man constantly living and reliving his past, present, and future, all at the same time, consistently able to needle the thread of his existence, in a way that allowed it to make sense. Or so he thought: the comic ends with him agreeing to the greatest conspiracy in human history, disconnecting from humanity and looking to the stars to satisfy the existential bounds of his mind (the meme of his disinterest in humanity is now iconic, after all).

Watchmen re-frames that idea ever so slightly, in a fascinating way: Dr. Manhattan did forget about his humanity… that is, until he fell in love with Angela, moments before he was sucked into a Kavalry-manned teleporter, which occurs exactly 10 years after he meets her. ” A God Walks Into Abar” opens with Dr. Manhattan putting on a mask (during the holiday celebrating his rampage to end the Vietnam War) and meeting Angela at a bar (Angela Abar… A-bar… Lindelof strikes again). It then proceeds to bounce around time, to capture life as Dr. Manhattan experiences it; an ever-evolving set of vignettes, an expanding world of knowledge, one he is not able to create and shape himself.

The moment ” A God Walks into Abar” builds to is referenced in the first few minutes; after his strange introduction piques Angela’s curiosity, Dr. Manhattan notes that he is in love with her. We see that moment occur 50+ minutes later, as Angela turns into a one-woman assault squad, hell-bent on taking out every last Kavalry member outside their home. Infuriating as it may be to understand, he can see the beginning and the end of their short, beautiful life together at the same time, because he’s living it all at the same: Watchmen captures that idea poignantly in its unorthodox approach, smartly tethering each strange sequence together with a singular image, or color, to bring us from one moment to the next.

As we move through time, “A God Walks into Abar” casually begins to fill in the big holes of narrative created in last week’s slightly frustrating entry; we finally learn how Ozymandias ended up on Europa, and the history of the people and places we’ve seen on that world for eight episodes. We also learn how Will became involved in the process, which is, ironically, the moment it all falls apart for them: the moment Angela asks Dr. Manhattan to inquire about Judd’s identity (while Dr. Manhattan talks to him in 2009), she inevitably kicks the first domino down the path of Judd’s death, and the Kavalry’s impending attempt to turn themselves into racist deities.

How “A God Walks into Abar” frames this is its true genius: Dr. Manhattan’s existence is the conundrum of the chicken and the egg. There was a moment in time where Jon existed, and Dr. Manhattan didn’t; but there also isn’t, since Dr. Manhattan’s creation allowed him to experience all of time in a cumulative fashion, rather than linear. Finally, the many, many images of eggs and yolks finally come together: as nature’s great paradox, a man literally capable of creating entire worlds and paths of evolution, finding his way back to the only immeasurable quantity in the universe, love.

“A God Walks into Abar” makes an important distinction between love and worship: love is able to be critical, to understand and accept flaws, to show empathy. Worship, or what Dr. Manhattan experiences when creating his own world (and people) on Europa, is disillusioning: there’s no older religious trope than the unsatisfied god who turned to humanity to find purpose, and that’s “A God Walks into Abar” to an absolute T. And it works: the love story that plays out is among the most heartfelt entries of Lindelof’s career, able to carefully turn a seemingly indecipherable character, into something beautifully textured, human, and meaningful.

If there’s any noticeable flaw to “A God Walks into Abar,” it is strangely the episode’s construction as a romantic entry; it kind of sidesteps integrating Dr. Manhattan’s chosen identity to live as a black man in modern America. There are hints of it at various parts – the scenes of his childhood, in particular – but “A God Walks into Abar” strangely doesn’t contend, at least in this episode, with Angela’s decision to show Dr. Manhattan the original Cal’s body. Why did she just show him three white bodies first? What drew Dr. Manhattan to OG Cal’s appearance? For a series so deftly integrating explorations of race and identity into the Watchmen mythos, the lack of reflection in this episode feels like a bit of a missed opportunity.

But that is a small complaint in what will be remembered as a signature episode of the series; and for good reason, because it is a phenomenal, breathtaking hour of television. “A God Walks into Abar” is also another bold reinterpretation of Watchmen itself, replacing the cold sensibilities of the comic’s anarchistic roots with a warm beating heart; as cheesy as that sounds, it is everything to making the high wire act of Watchmen the series work on a fundamental level. After all, love is the one universal element ensuring humanity’s continued existence; as Dr. Manhattan finally understands, even if the pursuit is an impossible one for us as a species, it at least makes the inevitable collapse of our world something worth fighting against.

“By definition, doesn’t every relationship end in tragedy?” Fuck. Me. Up. Watchmen.

The Philips/Crookshanks origin story ends up being a rather touching detail: they are modeled after two lovers young Jon saw during his brief stay in England (the mansion the event happened in ends up being Ozymandias’ home).

Very interesting note that Ozymandias’ Plan A to defeat Dr. Manhattan was not to kill him, but to condemn him to being a mortal with amnesia.

Dr. Manhattan mentions his theory for being able to transfer his powers; would not be surprised to see that come up in next week’s episode.

Related to the previous note: Dr. Manhattan tells Angela he wanted her to see him outside by the pool. Does that mean we’ll see Will walk on water next week?

Lots of props given to Regina King throughout the series for her stunning performance – if Yahya Abdul-Mateen II is not nominated for a shitload of awards for his work in this episode, however, we riot.

A post-credits sequence finally reveals the use of Phillip’s infamous horseshoe – though it remains to be seen where this story is all heading, as Europa’s small world of clones desperately tries to keep another god from leaving them.

‘J.T.’ – A Tragic, Poetic and Improbably Beautiful Holiday Special that is a Must-See!

‘Bojack Horseman’s Xmas Special Is the Height of Schmaltzy Satire