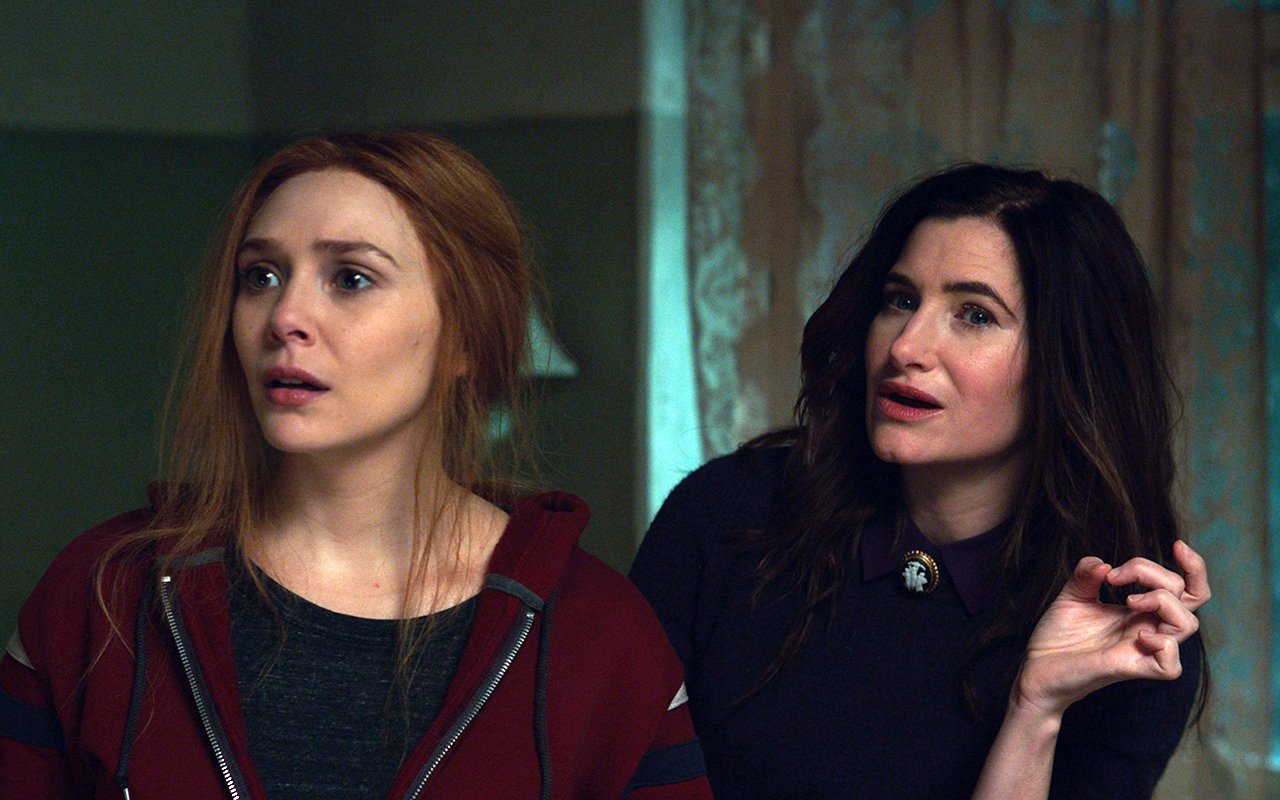 Buckle up, nerds – we’re going on a clip show! Well, not really; like many of WandaVision‘s nods towards iconic formats and classic set-ups, their commitment to the clip show bit is fleeting, part The Flash, part Community… and of course, part MCU, turning “Previously On” – a rather perfunctory info-dump episode – into another strange, uneven foray into Wanda’s past, present, and immediate future.

Starting off with an extended sequence of Hahn Going Ham certainly helps; opening with Agatha’s Salem-intensive backstory, “Previously On” quickly fills in the gaps around Harkness and her presence in Westview – itself then used as a launching point to explore the excruciating traumas of Wanda’s past (in its own way, a nod to Endgame‘s time-traveling antics). All of this is in service of Agatha’s curiosity, which at least helps give a natural frame to the episode’s obvious purpose of “quickly filling in all the holes before the finale” (the box of DVD sets Wanda’s father brings home… not so much).

From there, “Previously On” offers the emotional pendulum swing I’ve been harping on for weeks; however, throwing it all into one episode upends everything done in the first seven episodes. This episode wallows in the misery of Wanda’s short existence, which pays uneven dividends. Yes, it is wildly effective at breathing life into a scene of Vision and Wanda sharing a moment at the Avengers compound (sometime after Age of Ultron, I assume? Who cares) – but as a component of WandaVision‘s larger whole, it stands out in stark contrast to the balance of humor and dread driving the best moments of its first three and a half-hours.

The way this season’s been constructed, this of course is necessary; but it is emblematic of WandaVision‘s inconsistency, both in form and narrative, bouncing between ideas and tones, often at the rhythms and whims of the suffocating presence of the MCU: WandaVision must resolve itself into the larger universe around it, and “Previously On” is consumed by those requirements, abandoning the (somewhat too careful) approach of earlier episodes to fill out a checklist of necessary details in order to set the stage for the season finale.

Lots of shows do this, of course – but the craft of writing great television is burying those agendas under character, theme, and emotion, the latter of which is where WandaVision occasionally grounds itself in “Previously On”. But even those moments are in service of the enormous mosaic of Marvel plot: seeing Wanda not steal Vision’s body is important to Wanda’s character, an indicator of her desire to find a way to put it all behind her (after all, Hayward idiotically tells her that her powers could probably bring him back… more on that in a minute). But that’s used as an exclamation point (she didn’t steal his body! Two Visions!), rather than a defining moment of her character: Westview is created simply by Wanda giving into her trauma (because you know… women and their inability to control their emotions), letting it consume her and create the strange “false world” around her that draws Agatha’s attention.

Is it effective? Sure; seeing Olsen embody so many different painful sides of Wanda offers a versatility not often offered to performer or character in the franchise; but then the rug is swept under us as Agatha threatens Wanda’s children (who are… real? If the Scarlet Witch is someone with literal powers of creation, then Vision 2 and the kids are real, in some sense of the word) and it is revealed there are two Visions (for those who thought we might get a quasi-Vision Quest adaptation… well, here it apparently is!).

Then again, if we shift our attention to the other witch – how effective is “Previously On” at defining Agatha as a character? The answer is decidely incomplete; knowing her presence in the Marvel Comics (where she often acts as more of a chaos agent, then someone of evil intent) helps give context to some of her scenes, but her official introduction into WandaVision is more than cloudy. Is she trying to harness Wanda’s powers, or merely understand? Is she helping her, or manipulating her? A little mystery never hurts, of course – but in an episode so painstakingly devoted to defining everything, Agatha’s goals remain a strange dark spot “Previously On” resists uncovering.

All things considered, there are moments of “Previously On” as emotionally affecting as anything in the MCU; the aforementioned scene at the Avengers compound is as strong a moment as WandaVision has, offering a glimpse into the burgeoning humanity of Vision, and the promise and hope it offered Wanda at (what was then) her lowest point. He was a refuge, a being who’d never had to experience the horrors of Wanda’s upbringing, or human existence in general: the purity of that moment, is the kind of emotional foundation I wish previous MCU movies had offered, breathing life into a relationship with a little context, and emotional nuance (it really is a beautiful scene).

Highlighted by that scene, the journey of “Previously On,” sans context, is rather impressive, a visceral reminder of how trauma can consume us. As the penultimate episode of WandaVision, however, it is a nakedly obvious attempt to pull all the disparate threads and mysteries together, tying it all up in one neat bow for next week’s season finale (which seems to be a double bill of Wanda vs. Agatha vs. whatever Monica is now, and Vision vs. Vision? Triple bill, if you count Darcy Lewis’ continued war against good comedy). At that, it feels like WandaVision is decidedly less effective, unable to hide its narrative agenda of showing AND telling, under the thin sheen of Agatha’s memory spells (I mean… the clip show format was RIGHT THERE – after “Agatha All Along”, I thought WandaVision might finally embrace its weirdness wholeheartedly).

I’ve said it before, and I’ll say it again: the MCU comes for everyone at some point, and like the previous five episodes of WandaVision, “Previously On” is no different. Unfortunately, it is subject to the whims and desires of the powerful – in a way that mirrors the post-credits sequence where Vision is Frankenstein-ed to life by a military official weaponizing the physical embodiment of Wanda’s trauma (wait… is he putting magic into a robot to fuel it? How does that work?… I’m getting distracted), a strange, seemingly unintended (but fitting) beginning of the end to what’s been a strange experiment in melding the worlds of television and film.

Musician Highlights the Clever Nature of the Music from WandaVision