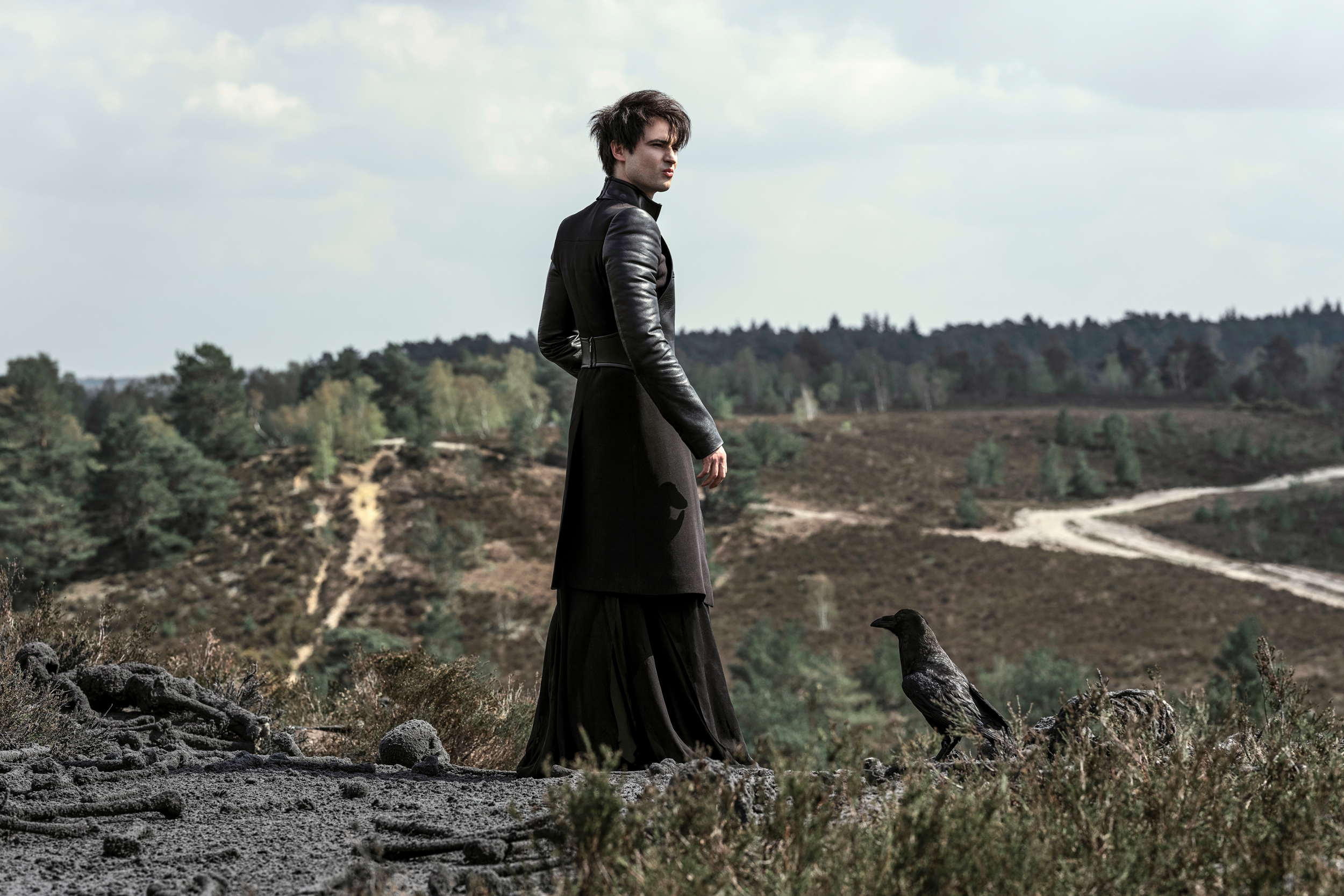 Neil Gaiman’s sweeping and visionary epic challenged the literary notion of what a comic could be. Both all-encompassing and intimate, its personification of dreams spanned every plane of existence, awing readers with its mesmerizing visuals, complex narratives, and philosophical revelations. No surprise it was considered impossible to adapt. Enter Netflix, taking on this daunting adaptation with Gaiman on board as a producer to help shepherd it to the screen faithfully.

Yet, Gaiman adaptations have a history of being hit-or-miss. For every Coraline, there is an American Gods (although, that first season was incredible). But with a budget of $15 million per episode, the streamer seems confident in its success and ultimate longevity, making old and new fans alike excited at the prospect of a great mature fantasy, à la Game of Thrones.

The Sandman’s first ten episodes are finally here, and the show is another disappointing entry in Gaiman’s Hollywood catalogue of “misses”.

With unfettered anticipation, I sat back and eagerly waited for the studio logos to pass and for the famous Morpheus, Dream of the Endless to grace the screen. Thirty minutes in, the only word I could muster was “lacking”. After finishing the season, it remained a very fitting label.

Netflix’s adaptation is lacking in every sense of the word: from its visuals, to its atmosphere, and to its ultimate philosophical punch. For a story that entails so much, the show is rather limiting in its cinematic design. It comes across more like the work of an artisan rather than an artist, prioritizing functionality in favour of an original and provocative vision. The production is littered with formulaic flourishes, boasting cliched musical stings, bland lighting, and tired camera work. Its legendary source material is zapped of its wonder, poeticism, and complexity. What results is more of a surface-level teen fantasy rather than the mature piece of fiction many hoped for.

The Sandman centres on Morpheus (Tom Sturridge), The king of dreams and the ruler of the Dreaming (an amorphous dreamscape) who’s captured in 1916 by occultist Rodrick Burgess (Charles Dance) and his Order of Ancient Mysteries. After being held captive for over a century (seventy-two years in the comic), he escapes but finds his tools missing and his kingdom in disarray, with certain nightmares like the Corinthian (Boyd Holbrook) on the loose in the waking world. He sets out on a quest to recover his powerful artifacts and restore his realm, all the while having run-ins with various biblical and literary figures such as Lucifer (Gwendoline Christie).

Besides the brilliant overarching narrative, these first volumes enthralled readers with stellar individual “bottle” issues, with two of the greatest being “The Sound of Her Wings” (issue #8) and “Men of Good Fortune” (#13). Both are, essentially, chapter-long conversations between Morpheus and someone who becomes important to his emotional growth; in the former, he discusses mortality and a sense of purpose with his sister Death, and in the latter, he sparks a memorable, centuries-long, friendship with Hob Gadling (A beloved fan-favourite). Both issues are adapted verbatim, in the sixth episode of the series.

Despite being limited to twenty-four pages, Gaiman made these stories wholly memorable and captivating, utilizing the comic medium to its full potential. Given the opportunity, these thought-provoking stories would have surely been fleshed out. This TV series was that opportunity. Gaiman and his showrunners unquestionably had the time and space to build upon and even reimagine these stellar issues for this medium. Instead, they stuffed both stories into a single episode, not allowing them room to breathe and meaningfully permeate the screen. In its place, what we’re left with is a literal page for page, word for word adaptation that fails to come to life. What makes this worse, is that episode six is one of the show’s better offerings.

This mindset pervades the season in its entirety, as it sticks too faithfully to the comic’s bottle format. That setup worked for a comic, but for a TV series featuring an ongoing narrative, it becomes too unwieldy, too fast. While the last four episodes (which follow the Doll’s House arc) do have more cohesion and continuation, they still fail to translate the source material satisfyingly and tactfully, with it coming across too much like a CW teen drama rather than a dark foray into man’s most uncivilized instincts.

It’s a shame that Gaiman failed to take the same risks he made in 1988 when first writing this magnificent fable. As The Sandman’s meditative take on the enduring power of storytelling and its inherent malleability seems to have bafflingly not been considered from the outset.

This being a screen adaptation, there are differences from the original text. But the changes here are more a by-product of cutting corners than a consequence of a different medium. With many of them erasing the comic’s connection to the larger DC universe, such as John Constantine (now Johanna), Martian Manhunter, and some issues partly set in Arkham Asylum. Furthermore, there are also multiple changes that dilute the utterly inventive and clever outcomes of Dream’s trials and tribulations, as Gaiman’s introspective parables are rendered trite occurrences that distinctly lack emotional weight.

This is blatantly seen in the first episode’s conclusion, where one of the coolest punishments ever devised is unsatisfyingly transformed into a mildly surprising moment. In the comic, Dream punishes his captor, Alex Burgess, by sentencing him to “eternal waking”, a never-ending cycle of horrific false awakenings. But in the series, it’s changed to “eternal sleep”, trapping Alex in a perpetual state of sleep paralysis. It’s still a harsh punishment but lacks the inventive and cathartic nuance of the comic, one of the very components that made it so memorable.

Even the story’s philosophical and reflective edge is dulled, as the famous “what power have dreams in hell?” speech is robbed of its triumphant and inspiring power, as its rendered mere dialogue, instead of a rousing lecture directed at the hordes of hell.

The show is full of deviations like this, and they often detract from its thematic and philosophical ambitions, as Gaiman and company play it safe rather than allow its interesting narrative to embrace its innate originality. It results in an experience that is startingly safe and ultimately dull, as it places limits on the grand scale and teeming originality of the source material.

For viewers unversed in the world of The Sandman, they will only find a trivial and serviceable fantasy that evokes the soft whimsy of efforts like the Narnia films, rather than the majesty and cathartic heft of works like The Lord of The Rings. With so much of the show gravitating towards mature subject matter (explicit sexuality, graphic violence, and profanity) it’s baffling how much of it feels like a children’s fable, especially when the show leans towards more fantastical elements, which there is plenty of. The fantasy should have elevated the mature and thought-provoking aspects of the narrative, but they completely fail to gel and cohere, feeling like disparate elements that were compelled to come together.

It’s also distinctly missing a vibrant opening credits sequence and chapter titles (which unabashedly look like basic Word fonts) that one would expect from a tale like this. With so much visual splendor to build off of the showrunners, unfortunately, opt for the middling route, drenching almost every scene in either dark hues or an odd soapy sheen that dilutes much of the original text’s virtuoso. Its clunky effects only add insult to injury. Though, the show still retains enough to make it watchable.

That’s probably this adaptation’s greatest sin. It’s just merely watchable. It fails to challenge its audience, holding our hands until no room is left for interpretation and discovery. It constantly reminds the viewer of what location and timeline it’s set in, even when it’s previously made abundantly clear. This is most annoyingly evident in the “Men of Good Fortune” sequence, as the audience is clearly informed of the timeline visually but is repeatedly presented with bland titles. Signaling that The Sandman clearly doesn’t trust its audience to buy into its vision.

Where the show does excel is in its performances. Tom Sturridge is a natural fit for the contemplative and brooding Dream. His deep, but longing voice vividly brings this revered character to life. Boyd Holbrook is also a highlight as the garish and devilishly charming Corinthian (whose role is fairly expanded here, playing an ancillary role in Dream’s imprisonment). Despite him being forced to don a wicked pair of black shades he still manages to possess great range, radiating with a palpable sense of vitality. Stephen Fry, Gwendoline Christie, and David Thewlis also round out the cast with notable skill. Newcomers like Kyo Ra and Vivienne Acheampong show their inexperience, but mostly hold their own against the more seasoned members. Voice performances from Patton Oswalt and Mark Hamill are also great, with Hamill’s portrayal of Mervyn Pumpkinhead being the most memorable, despite having a modicum of screentime.

The Sandman does begin to find somewhat of a footing in its second half (with episodes five and six being the strongest) but by then it’s already played most of its hand. It’s structurally faithful to the comic but fails to find a unique voice that evokes its introspective power. Hopefully, this season will be a learning experience and, if renewed, might come into its own. But as it is, it’s another in a long line of mediocre Netflix adaptations, and an aggressively underwhelming one at that.

The Sandman Transforms a Visionary Epic into a Formulaic Fantasy