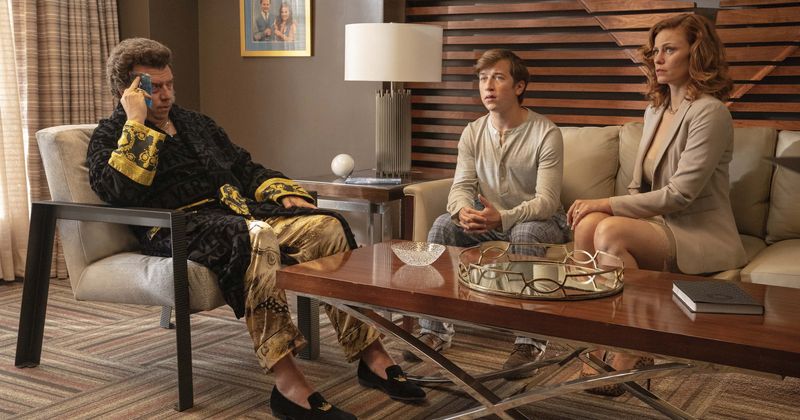 It’s fascinating how much of Christianity is built on the idea of forgiveness – a philosophy where those who’ve done bad things can be redeemed by coming clean. It’s such a simple idea; and it is never how it actually works, no matter how faithful we may be. No matter our designated lot in the afterlife, the decisions we make in this life have consequences – and sometimes, simply apologizing or being honest after all the emotional damage’s already been done is as useless as doing nothing at all. Selfishness comes at a high cost, and “But the Righteous Will See Their Fall” is the equivalent of the moral check being left at the dinner table for The Righteous Gemstones, as Eli solemnly watches his family fall apart in front of his eyes in the aftermath of the Easter robbery.

Each week has seen The Righteous Gemstones raise its own creative bar: “But the Righteous Will See Their Fall” is no exception.

Each week has seen The Righteous Gemstones raise its own creative bar: “But the Righteous Will See Their Fall” is no exception, a stunningly versatile, driven episode with a penchant for being devilishly hilarious and uncomfortably honest in a single stroke. The opening scene alone is one of the best scenes of 2019, a Fargo-esque irony that sees Scotty, blowing through stop signs thinking of expensive Thai hookers, smashing his infamous van into the side of Baby Billy’s wood-paneled sedan, then dying, leaving Baby Billy and Tiffany holding $3 million in cash.

That scene begins with Baby Billy reminding Judy her career is better off “without a lover” – which he says moments before asking Tiffany for some road head, setting the stage for “But the Righteous Will See Their Fall” and the hypocrisy of its main characters. In Billy, The Righteous Gemstones shows the gamble of being deceptive and selfish; sometimes it pays off, and you can spend decades like Eli, living a life of wealth and influence. Of course,, that addiction to growth and wealth has left Eli widowed and taking care of his trio of emotionally stunted, nepotistic children; though Billy will eventually get (his next round) of karmic justice when he inevitably blows all the family money he just “inherited,” his existence offers an interesting contrast to the other members of the Gemstone family offers an important wrinkle on the episode’s central ideas.

For Jesse, Gideon, and the other involved parties of the “Atlanta incident,” that karmic justice is much more immediate and violent; Scotty takes a bullet through the head after pistol whipping Eli, Jesse ends up with a bullet in his ass, and Gideon is banished from his own family. It’s all their own doing of course – especially Jesse, who outs himself to his wife and friends in hilarious fashion, ruining their lives while impressively welcoming his own day of reckoning upon himself.

Though some of Jesse’s moves are definitely pro-active in the name of saving face (which, given the state of his butt hole by the end of the episode, doesn’t go well), they come with the cathartic angle of him owning his own shitty behavior; like many privileged adult brats, he may never grow to truly learn the difference between true morality and the self-serving brand he employs in the name of Jesus, but seeing him recognize the damage he’s done, and apologize to Gideon, is meaningful, and gives his story a bit of necessary emotional arc – and directly leads to him getting shot in the ass by his angered wife; turns out honesty is not always the most precious, healing power in the world, and one’s own actions in this life can have consequences, emotional, physical… and of course, financial, as the family contends with the loss of their Easter millions.

Jesse’s brief moment of reflection is played to such comedic perfection; it’s a inch of progress in a moment where a mile and a half is needed, letting Jesse’s narcissistic streak get entangled with his limited nobility and desperation to maintain the status quo in his household. Where Eli curses himself for not doing enough, Jesse certainly does too much – of everything; giving details, blindsiding his friends and their families, cocaine – and the result is the same; a house built on dishonesty and selfishness will crumble, and both father and son absorb that lesson in equally powerful ways.

Judy, on the other hand, is in the next step of privileged mental breakdown; she tries to win back BJ – excuse me, Edgy BJ – with some curry and a half-hearted apology, predictably ending in her smashing a woman’s vehicle repeatedly with a shopping cart. Edi Patterson is a goddamn treasure; her performance as Judy runs the emotional gamut in “But the Righteous Will See Their Fall,” from her depressed resignation when her “church songs career” falls apart, to her self-righteous anger when BJ refuses to take her back. She’s thrashing, throwing out strange asides (“come to the back – we’ll rub backs and dicks” she says to him, in front of a child), and undoubtedly cursing herself as the dismissed, undesired child of the Gemstone family – though it is certainly a fortune she’s deservedly earned, Patterson’s performance gives it the emotional duality it needs to complete the triumvirate of comeuppance forming the backbone of “But the Righteous Will See Their Fall.”

If there’s one part of the episode that doesn’t naturally fit, it’s Kelvin’s quick devolution as one of America’s top 5 youth pastors; distraught over seeing his depressed father and sinning brother, Kelvin takes the burden of the family’s failures on himself. He begins drinking, and he throws Keefe off his property; clearly, he’s struggling to maintain face in all the stress and uncertainty, something he’s never had to face in his life. But if there’s one bit of the episode that feels… well, out of place, it’s Kelvin’s rapid emotional shift. It has potential, of course (if he breaks away from the family, it could shatter them for good), but it doesn’t fit neatly into the path so many other characters are put on in “But the Righteous Will See Their Fall,” and therefore feels a bit out of left field.

Speaking of fields, “But the Righteous Will See Their Fall” ends with the police finding Scotty and his bloodied van out in the middle of the woods – turns out Baby Billy’s penchant for gambling is as good as his knowledge of coastal tides, which means the clock is ticking on someone figuring out what happened. And we all know Baby Billy is going to flash that money around something fierce (and maybe Tiffany gets both top and bottom teeth fixed?), which means Eli is going to be hot on his tail, with at least two furious children in tow. One thing is clear; “But the Righteous Will See Their Fall” marks the beginning of the end for the Gemstone empire, a theological car crash of Ozymandias proportions, played out in slow motion that can only be stopped by… well, the one theoretical entity so much of the family’s lost their faith in, as the metaphysical chickens come home to roost in one of the most hilarious, poignant half hours of 2019.

Primal Is Genndy Tartakovsky at his Best and Most Brutal