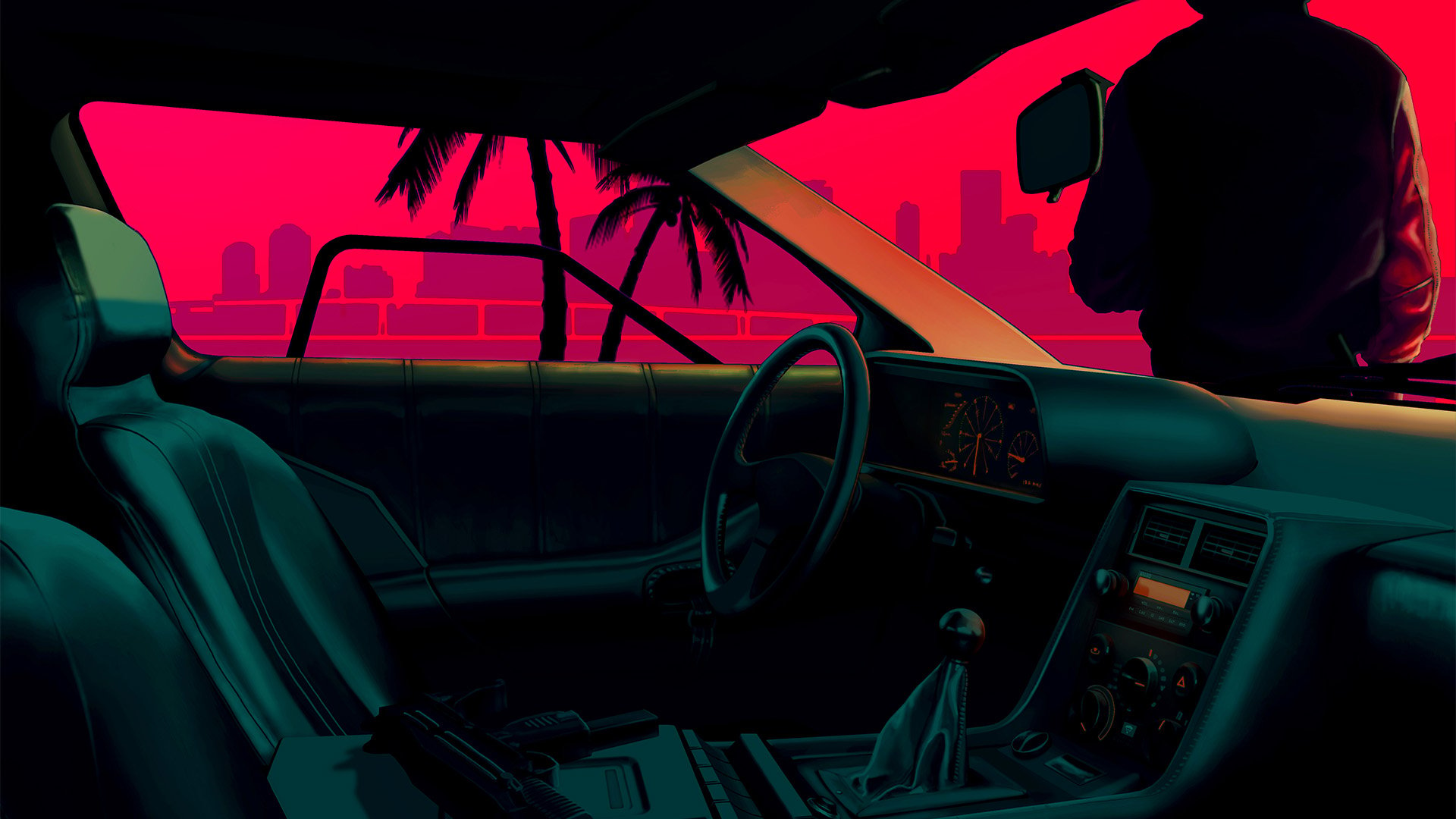 Miami Vice premiered on September 16, 1984, with a two-hour season premiere. The episode titled “Brother’s Keeper” garnered critical acclaim, and the series went on to become a symbol of the times.

Legend has it that NBC President Brandon Tartikoff started the ball rolling after he scribbled “MTV Cops” on a napkin, and then went looking for someone at NBC to produce the show. However, it was later revealed that the series was actually the brainchild of two other men: scriptwriter-turned-director Michael Mann (coming off the critical success of Manhunter), and Hill Street Blues writer-producer Anthony Yerkovich, who drafted the idea based on news stories about the thriving drug trade in Florida. In fact, Miami Vice was originally intended to be a series titled Gold Coast but it quickly veered in an entirely different direction after Mann influenced the filmmaker to adapt some of his neo-noir visual style to the project. And while Mann never directed a single episode of Miami Vice, and is only credited as a writer on one script, the film director is said to be the show’s most dominant creative force. Bringing along his distinct aesthetic vision, he was heavily involved, overlooking almost every visual aspect and overseeing each script and small detail.

The two-hour pilot was scripted by Yerkovich and directed by Thomas Carter (who helmed the pilot for St. Elsewhere two years earlier)— but it was Mann was chiefly responsible for guiding its first seven episodes and helped establish the show’s innovative visual style and tone (by that point, Yerkovich was out and never involved with Miami Vice again).

Of the 22 episodes included in the first season, there are a handful of duds but, the pilot undoubtedly still holds up today. In fact, “Brothers Keeper” remains an essential 80s archive piece, demonstrating that style over substance, can sometimes work. When watching the pilot, it is easy to see why Miami Vice had such an impact on popular culture in the mid-1980s and became one of the most popular television shows of the decade. Vice was revolutionary in how it fused its music, cinematography, and imagery, and how it helped define the fashion and music of the period— all while simultaneously maintaining a high quality of acting and storytelling.

“5000 street corners in greater Miami, and Gumby here has to pick ours!” – Crockett

For the unfamiliar, the show features the talents of Don Johnson as James “Sony” Crockett, a former wide receiver turned undercover cop who lives on a sailboat with a hot-tempered alligator named Elvis – and Philip Michael Thomas as Ricardo Tubbs, a NYC officer who heads to Miami to hunt down the man responsible for his brother’s death. Miami Vice followed the adventures of the two detectives as they chased down pimps, renegade FBI agents, arms dealers and drug kingpins. They answered to Lieutenant Martin Castillo (Edward James Olmos) and sometimes worked side by side with Trudy Joplin (Olivia Brown), Stan Switek (Michael Talbott) and Larry Zito (John Diehl).

The pilot does a commendable job of establishing a lot in one episode and most of the series’ regular cast are introduced. While we get to learn a bit about Tubbs, mostly illustrated via flashbacks, Crockett is front and center throughout, balancing his many personal problems with the difficulty of being undercover in some of Miami’s most rotten criminal organizations. The pilot also establishes Sonny as a complex, complicated character, going through a divorce with his wife Caroline who he is still in love while having an on/off-again romance with fellow detective Gina Calabrese (Saundra Santiago).

Don Johnson is clearly the highlight here: he’s tough, honourable, charming, and undeniably cool. He’s so good, it is easy to understand why After Six created Miami Vice dinner jackets, Kenneth Cole created Crockett and Tubbs shoes, and Macy’s opened a dedicated Miami Vice section for young men. After only a few episodes, men all around the world began to sport white suits, with the sleeves rolled up, pastel shirts and expensive shoes without wearing any socks. Don Johnson’s typical attire of Italian sports coats, T-shirts, and white linen pants became a hit and even Crockett’s unshaven appearance inspired men to wear five o’clock shadow.

Miami Vice made a star out of Don Johnson, who eventually won a Golden Globe for his portrayal of Sonny, and it is easy to see why. Tubbs arguably has a darker past with the death of his brother haunting him, but Sonny feels more human. We immediately sympathize with his character and Johnson brings much depth and humanity to the role. As one of the most famous black/white cop pairings, Tubbs serves as the other half of this dynamic duo. Tubbs comes down to Miami under the guise of Raphael Tubbs with a score to settle. While pursuing a man named Calderone, a known Columbian drug lord, he crosses paths with Crockett who blows his cover and the two are forced into an unlikely partnership. Tubbs is arguably less charismatic here, but is still a great character no less, delivering lines with high energy and adding a much-needed dose of comedy. Tubbs is the polar opposite to Crockett both in looks and personality; but Thomas and Johnson share great chemistry, improving minute by minute as their journey boasts a surprising emotional pull.

Network executives went after a young demographic, and the youths of the early ’80s who were embracing MTV. Taking advantage of the growing popularity of the network, the show’s creators wisely decided to have music play an instrumental role in the series. Mann brought in Czech composer Jan Hammer, an electronic music wiz whose moody pieces added an almost foreign feel to Miami Vice. Mann wanted Hammer to do to Miami Vice, what Tangerine Dream had done for his 1981 masterpiece Thief. The Miami Vice theme would go on to become a Top 10 hit, and the soundtrack album became one of the top-selling television soundtracks of all time.

Producers also allowed Miami Vice a bigger budget, to pay for the rights to popular songs, and sought out the most popular tracks of the day: “Body Talk” plays while Tubbs fights with Calderone early on; “Somebody’s Watching Me” plays while Tubbs visits a strip club and “Girls Just Wanna Have Fun” is heard when the snitch dressed as a woman is gunned down in an alley. Other tracks include “All Night Long” by Lionel Richie (performed by house band in the nightclub), and Miss You” by The Rolling Stones, during a stakeout. Nowadays we come to expect popular music featured on just about every television show, but back in 1984, this idea of cross-marketing was unheard of. Together, the visuals and the music make Miami Vice ahead of its time. As Lee H. Katzin, one of the series’ directors, once stated, “The show is written for an MTV audience, which is more interested in images, emotions, and energy than plot and character and words.”

In the Air Tonight…

The most obvious example of this is the sequence nearing the end of the pilot, with Crockett and Tubbs speeding through a nighttime, downtown Miami, while riding in a Ferrari Daytona Spyder, set to Phil Collins’ “In The Air Tonight.” This scene is arguably the most memorable and famous scene from the series and is regularly cited as one of the greatest, most influential moments in the history of television. The music of Collins and the cinematography work together masterfully in a four-minute clip set to almost the entire length of the song. The diegetic sound is kept to a minimum and cinematographer Robert E. Collins beautifully captures close-ups of Crockett, Tubbs, and the car, with the city lights reflected across the Ferrari’s polished black exterior. During the some-five and a half minutes, we get flashbacks to Rafael’s murder, cinematic shots of the Miami nightlife, and a touching moment in which Crockett pulls over to call his ex-wife and validate their once relationship: “It was real, wasn’t it,” asks Sonny. This original sequence in Miami Vice became a landmark in television history and no doubt led to the heavy integration of pop music laid out over climatic scenes on television. Decades later, we owe it to Miami Vice for pioneering this movement in television history.

“My badge says Miami, but here lately it’s been looking a lot like Disney World!” – Crockett

Miami Vice is all style!

If there is one thing both supporters and detractors of Miami Vice can agree on, it is that the show is incredibly stylish. People magazine called Miami Vice “the first show to look really new and different since colour TV was invented.”  The series was obsessed with sound, image and spectacle and critics, cultural commentators and even the odd literary scholar were drawn to the striking visual and aural characteristics of the show (the key characteristic of Vice was a pallet free of earth tones, as decided by Michael Mann). When Miami Vice was nominated for 15 Emmy’s in its first season, and picked up awards for cinematography, sound editing, and art direction, it was evident that the industry also recognized these technical accomplishments. Miami Vice broke all the rules of prime time television and the risks paid off in dividends. While “Brother’s Keeper” doesn’t feature the most groundbreaking narrative nor witty dialogue, the visuals and the music make up for any shortcomings, elevating the pilot to a whole new level.

In terms of storytelling and subject matter, Miami Vice wasn’t breaking new ground, but Vice was a giant step toward the more mature TV dramas of today and would forever change television. And “Brother’s Keeper” is without a doubt, the most influential two hours of television from the 1980s.