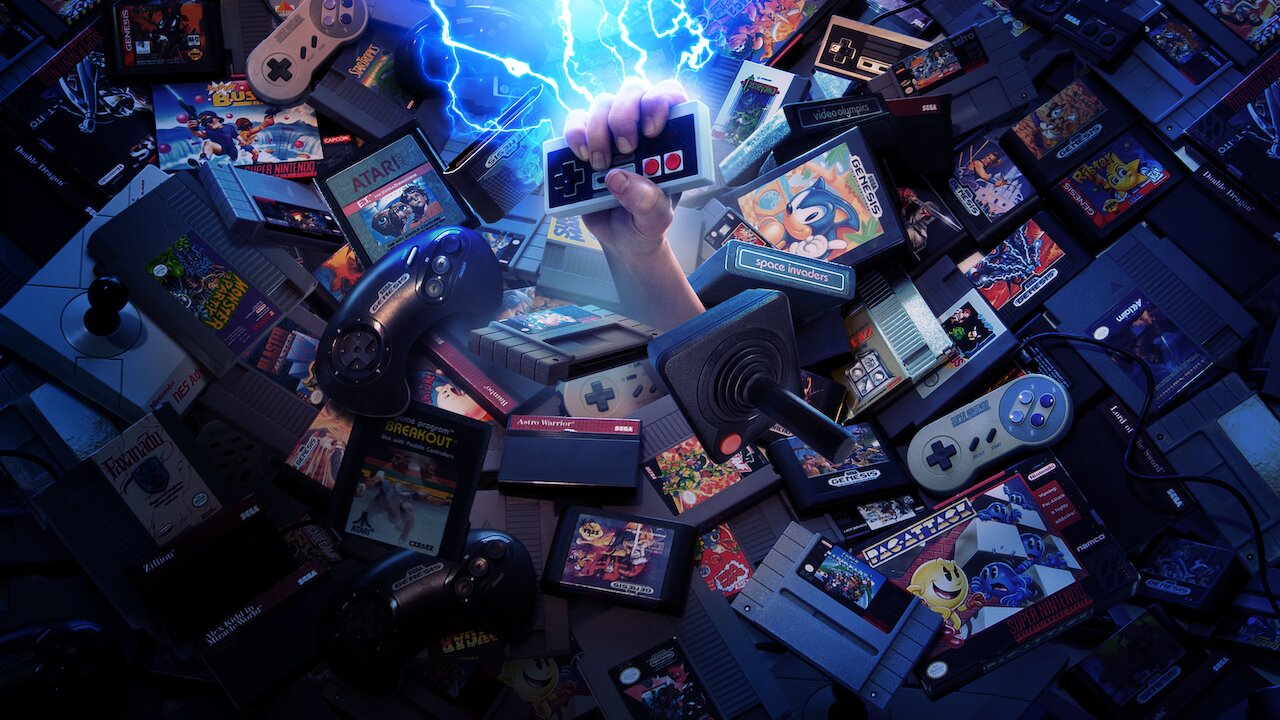 For an industry with such a captivating history of wonderful breakthrough stories powered by both users and creators, there are surprisingly few professional documentaries spotlighting the rise, fall, and return of video games. As you would expect from the streaming giant that manages to score the voice of Super Mario himself, Charles Martinet, as their narrator, Netflix has not just knocked it out of the park with their new retro-focused series High Score. Netflix has rightfully earned the top of the leaderboard. High Score is the holy grail of video game documentaries as it flaunts its creative minds, engaging visuals, and its almost perfectly orchestrated narrative that pulls together multiple stories to form one engaging overarching theme. It is an intricately crafted six-episode series that fully dives into some of the most fascinating aspects of the gaming industry. It features everything from the design philosophy of the arcade cabinets craze, to the hidden histories of interchangeable cartridges, to the painstakingly high legal battles that could have changed the digital world forever.

Netflix does what the industry don’t- make a damn good gaming-centric docuseries featuring more than just developers or players.

High Score contains a string of correlated stories from multiple perspectives during the golden age of gaming. It brings its many tales together to show audiences the uphill battle that early video games faced when evolving from toys to an important entertainment platform in the public eye. In the same fashion as its opening episode that presents how the industry was off to the races after the smash hit of several arcade titles, High Score is out to explore as much as it can during its runtime. It takes viewers on a journey, beginning by explaining how the days of a few crack shot programmers helped Silicon Valley find its footing with Atari at the helm and ending at the dawn of three-dimensional graphics and online multiplayer during the fourth generation of home consoles–albeit with some slight interruptions, but we will get to that later. Even if you think you are a seasoned veteran that might know all the information that will be featured in the series based on its array of topics, there is a high chance you are still going to walk out with a bag of new facts.

While High Score’s incredible lineup of inventors behind some of the industry’s most influential titles steals the spotlight, there are plenty of players, lawyers, salespeople, and pop culture icons that the show appropriately pays tribute to. It always manages to include some underdog who unexpectedly had a larger impact on history than it may seem. Whether it’s John Kirby, who defended Nintendo against Universal over copyright infringement for Donkey Kong, or famous football coach and sportscaster John Madden who had a hand in creating his flagship named franchise with Electronic Arts that skyrocketed Sega to the forefront, the series is packed with a lot of unexpected variety from individuals who are not programmers. By far one of the most unexpected moments the show dives headfirst into is the origins of Nintendo Power and the famous Game Counselor call line.

While its stories are phenomenal, where High Score truly never skimps out on is its reliance on remaining visually appealing up until its closing. As should be the case with a documentary highlighting video games, the visuals should not just be a bunch of figureheads talking or roaming around buildings. With a focus on the past, the series thrives between clever usage of archived stock footage of recorded events and newly digitized 8 to 16-bit recreations of scenes that have no available videos or photos for that matter. Focusing on the archived stock footage, the production crew has managed to find the cleanest quality possible of various commercials, behind the scenes recordings, and tournaments available. It may sometimes rely on screen cropping, but the show’s careful editing format will ensure that viewers are never pulled out of the world they are embracing. As if the show had not embodied its 70s to 90s esthetic with that enough though, the pixelized scenes created to explain undocumented events are the cherry on top. It never pulls any punches on the visual spectrum of its run.

Despite its phenomenal approach to storytelling, the series does fall short when splitting time between the present and past during two specific episodes that lose focus.

The only episode that suffers from a lack of the two distinctive visual styles that is, upsettingly, the finale. This concluding episode is tightly focused on the creation of three-dimensional graphics and online multiplayer over landline through Nintendo’s Star Fox and Id Software’s DOOM. It certainly has a story as great as its predecessors that builds up to the creation of two of gaming’s most iconic 16-bit era releases, but it lacks the charm and passion that the other episodes unmistakably have. Maybe it is because of a lack of archived stock footage available from the time of the games’ creation or budgeting reasons, but at the very least the editing team could have used photos of the crew or created more retro stylized animations to accompany the story. While the finale never falls visually flat, it is disappointingly underwhelming. Outside of that nitpick though, the biggest problem High Score has is its pacing, which is disrupted by two peculiar parts.

While I will reiterate that each chosen story does indeed have a long-term purpose in allowing the show to helm a consistent and coherent narrative along with a theme, a quarter of the episode ends up coming off rather clunky for a specific reason. The initial order of the episodes may seem as if the season follows a very specific timeline and while it does indeed do this, there are two episodes that time jump and focus on the present day rather than the past just too much. Since this a documentary series, that can make some of its events come off as feeling rather unimportant. Episodes 3 and 5 (Role Players and Fight!) are intriguing episodes on their own but are seemingly the only troublesome additions to the series that cause these issues. Fight!’s focus on eSports, while not completely out of place, is noticeably unorthodox from what High Score attempts to accomplish.

On a side note, one flaw that is often noticeable throughout the series has to do with its sudden, often confusing name placements. Whenever a non-English speaker is introduced–and there are a lot as you would expect from a series talking about products mostly originating in Japan–the creator’s name often pops up while they continue to speak. These non-English speakers are never dubbed. Due to viewers focusing on reading subtitles, it can be often hard to catch their names at first glance as the show’s editing style provides no time to shift your reading focus. This is not a problem as Martinet always ends up saying who the person is, but it can be bothersome on the eyes at times as you shift your perspective to another area of the screen and are forced to rewind to continue reading subtitles you missed.

Between its incredible archive of footage and newly documented facts, the show continually provides gaming wonders.

The production team behind High Score is clearly more than just researchers targeting the gaming industry. This team has been carefully crafted of fanatics and historians determined on keeping some of technology’s most important stories and artifacts alive in the most clever and honorable fashion possible. Netflix has put extensive love and care into capturing the impact of some of gaming’s most influential pieces of history. They have managed to keep the legacy of classic games alive in an approachable and exciting modern documentary. This ultimately creates a show that is not only appreciable for younger players unaware of what an Atari 2600 is, but something for those who did–and even did not–grow up with video games in any form, whether that be PCs that could barely generate graphics, arcade cabinets at the local shopping mall, or a Nintendo home console in the living room. Besides its sometimes disruptive focus on the present and slight editing mishaps, High Score is a piece of technical glory well worth your attention.

Ranking Every Episode of The Legend of Korra Season One