Connect with us
With 2019 marking the One Piece anime's 20th anniversary, what better time (after much deliberation) to rank its openings from worst to best?

Few manga and anime franchises boast the prestige of Eiichiro Oda’s One Piece. The anime celebrates its twenty year anniversary in 2019, and with a bevvy of openings under its belt, what better time (after much deliberation) to rank them from worst to best? 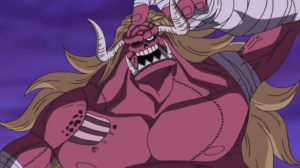 How do you spoil a masterpiece? In the words of that awful YouTube Rewind: “K-pop!”. Despite K-pop’s global popularity spike, it doesn’t hold a candle to its J-pop sibling. This is painfully evident as South Korean duo TVXQ bumble their remix of “We Are!” with clumsily clunky electronics and a misguided sense of style.

I hate “Jungle P”! Why? It has the ingredients for an adventure fueled romp, but its overly repetitive (and irritatingly frequent) chorus lands it in the ‘piss off outta here’ camp. Still, the pre-chorus is pretty good.

“Hard Knock Days” is decently fun and catchy, but ultimately mediocre. Unveiling the finale of Dressrosa (where Luffy kicks Doflamingo’s ass), it’s ironic that such an exciting bit of One Piece’s story is soundtracked by such a forgettable opening.

“Super Powers” is stylistically gross, and too commercial for its own good. If One Piece ever devolved into a sickeningly sanitized iteration of itself, “Super Powers” would be its soundtrack. The autotuned boyband manufacturization doesn’t click with Luffy’s adventure, but it scores points for (beyond its ugly exterior) being a legitimately catchy track. 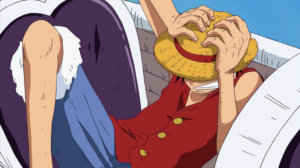 Every opening beyond here is a bona-fide banger! “Crazy Rainbow” is the kind of brass laden goof fest that encapsulates the spirit of One Piece. Chock-full of eclectic instrumentation, from the aforementioned brass, to electric guitars, to bloopy synths; it’s a wild ride.

As One Piece’s story dives headlong into bleak territory (the Straw Hats have been separated, and Luffy infiltrates Impel Down), “Kaze o Sagashite” throws a curveball via its starry eyed optimism. It’s so unabashedly gleeful, and its tonal juxtaposition is super effective.

“Believe” is a product of its time, and it rocks as a result! From the gimmicky Eurobeat synths, to the cringey vocal imperfections, it bellows 90s with loud and proud gusto. It’s silly to the max, and the classic era of One Piece is more memorable thanks to “Believe in wonderlaaaaaaaaaand”.

Post-Marineford’s a glum period. The violent war has concluded with tragic character deaths, and “Fight Together” matches the emotional tone of these losses. But despite the melancholy, its synth spearheaded instrumentation inspires hope, transitioning the grim reality of Luffy’s present to a pleasant flashback of him, Ace, and Sabo. It’s a stylistically spot on followup to Luffy’s lowest moment, held afloat by Namie Amuro’s beautiful vocals. 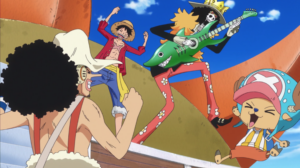 When it comes to One Piece openings, Hiroshi Kitadani is king! As the third of four openings he’s contributed, “We Can!” flaunts countless killer qualities (like its supremely satisfying bridge and chorus), but loses its edge on repeat listens. It lacks the longevity of Hiroshi Kitadani’s other openings, but it’s a bloody good head bopper nonetheless.

One Piece needed an anthem to ignite the Straw Hats’ adventure post-timeskip, and “We Go!” is that anthem. It’s a full frontal assault of mega joy, empowered by Hiroshi Kitadani’s thunderous vocals once again.

Black Leg Sanji, a talented cook and infamous pirate, has been strong armed into a political marriage with a three eyed memory manipulator called Pudding. This will bring together the genetically modified Vinsmoke family of mercenaries, Germa 66, to the sweet addicted tyrant Big Mom. It’s a plot of bonkers proportions that One Piece pulls off perfectly, and it’s soundtracked by a sombre opening.

Sanji’s leaving the Straw Hats, and Namie Amuro’s upbeat but emotional “Hope” conveys this. The fear of losing a fan favourite character melds with the titular song’s embers of hope. Like “Fight Together” (also by Namie Amuro), it’s pretty darn beautiful.

Brent Middleton put it best in his 2018 article documenting his favorite anime openings:

“One Piece has been my favorite anime ever since I was in middle school. The pure sense of setting out for adventure with friends has always felt magical to me, and “Hikari e” is the theme I’ve always felt captures that the best. Seeing the gang looking so happy and showing off their skills never fails to make me smile, especially when coupled with groovy tunes like these.”

“Hands Up!” is an underdog. It follows Hiroshi Kitadani’s legendary return in “We Go!”, and comes out the gate with a surprisingly sad sound for a pretty not sad arc (Punk Hazard). But it’s a quality bop by all accounts, refusing to conform whilst remarkably fitting One Piece like a glove (a heartfelt, emotional glove). 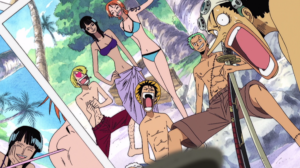 And on the topic of underdogs, “BON VOYAGE!” claims the crown. Smushed between the beloved “Hikari e” and “Kokoro no Chizu” (see: this list’s top pick), it’s something of a forgettable oddity. Well I’ve not forgotten it, and I rate “BON VOYAGE!” hard! The Skypiea arc wouldn’t be the same without this charming tune, beginning with heartwarming visuals of the Straw Hats living it up on the beach.

“Wake up!” is so stuffed to the brim with energy that it’s hard not to love it. Introducing Dressrosa, which (despite its pacing problems) is One Piece’s best arc to date, “Wake up!” juxtaposes its dark themes (Doflamingo’s murderous manipulation of Riku, and the mystery behind Dressrosa’s toy population) with hefty helpings of happiness. The lyric “We are best friends” as Luffy, Usopp, and Chopper chase a golden hercules beetle is corny but cute, and the visual switch midway through Dressrosa’s run to show Pica and the other Donquixote family baddies is a pleasant surprise.

(Also, the bassline is wild.)

Enies Lobby, the action heavy epic where the Straw Hats battle a malicious government entity to save their kidnapped crew member Robin, is often cited as One Piece’s best arc. With a stomper like “Brand New World” soundtracking it, it’s not hard to see why. It’s a shame this catchy adrenaline rush, bolstered by eye candy of the Straw Hats going toe to toe with CP9, only runs for 15 episodes.

As the Marineford arc enters full swing, viewers anticipate loss. To accentuate this, One Piece musters its saddest vibes. “One day” pulls on the heartstrings whilst simultaneously serving as a battle cry for the war to come. It’s a moody rocker that shatters One Piece’s formula, but matches Marineford’s tone to a tee.

03: Opening 22 – OVER THE TOP (Hiroshi Kitadani and Kohei Tanaka)

Hiroshi Kitadani returns in One Piece’s latest opening (at the time of writing), and damn diggity damn did he deliver! With the Wano Country arc being so hotly anticipated, hopes were high for this one, but Hiroshi Kitadani knocked it out the park. “OVER THE TOP”, true to name, is the most hyperactively over the top belter one could drum up. With visuals teasing the rip-roaring future of Wano Country, this gem surpasses the lofty expectations fans had for it and then some. 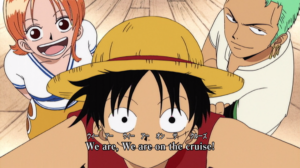 This is where it started. “We Are!” cemented Hiroshi Kitadani’s awesome reputation, and is a classic slice of Japanese music years following its 1999 release. A special version (opening 07) replaced Hiroshi Kitadani’s vocals with contributions by the Straw Hats, and whilst it’s no competition to the original, it’s still fantastic fun. There’s not much to say other than reiterate: “We Are!” is iconic for a reason.

How does an opening attain perfection? Well, the music needs to be hella hella hella hella hella catchy, the visuals need to pique viewers’ interests to the max, and the whole package needs to channel the tone of its anime flawlessly. “Kokoro no Chizu” achieves all this and more! From a chorus that ticks every earworm box under the sun, to visuals of Sanji somersaulting into flying kicks and Kaku nailing nifty parkour; nothing encapsulates One Piece’s off kilter eccentricity and Eiichiro Oda’s boundlessly playful imagination as effectively as this.

So do you agree or disagree with my rankings? Hop into the comments and fire away!

Netflix’s ‘Cannon Busters’ Struggles to Fire Off a Clean Shot