The following article contains spoilers for episodes 11-12 of Attack on Titan’s 3rd season.

And so the 3rd season of Attack on Titan comes to an end. While there had been reports that there would be a full 24 episodes in season 3, those hopes were quickly dashed by official releases earlier today. Now, with a 6 month hiatus confirmed, we’re left to decipher the ending of this arc.

On the plus side, what an ending it was! While the finale itself seemed to be doing mostly set-up for the next string of episodes, there was that intense mid-credits stinger. If you didn’t stick around for the credits than I would actively encourage you to go give them a watch before reading on any further.

For the rest of you, let’s discuss: one could argue that it’s almost too cruel to show this scene to us out of context, but if there’s one thing Attack on Titan nails, it’s those damn cliffhangers. This one saw Eren and Mikasa engaged in bitter combat with a bloodied Levi. The final shot before the cutaway was of Mikasa struggling to cut his throat with her titan blades. 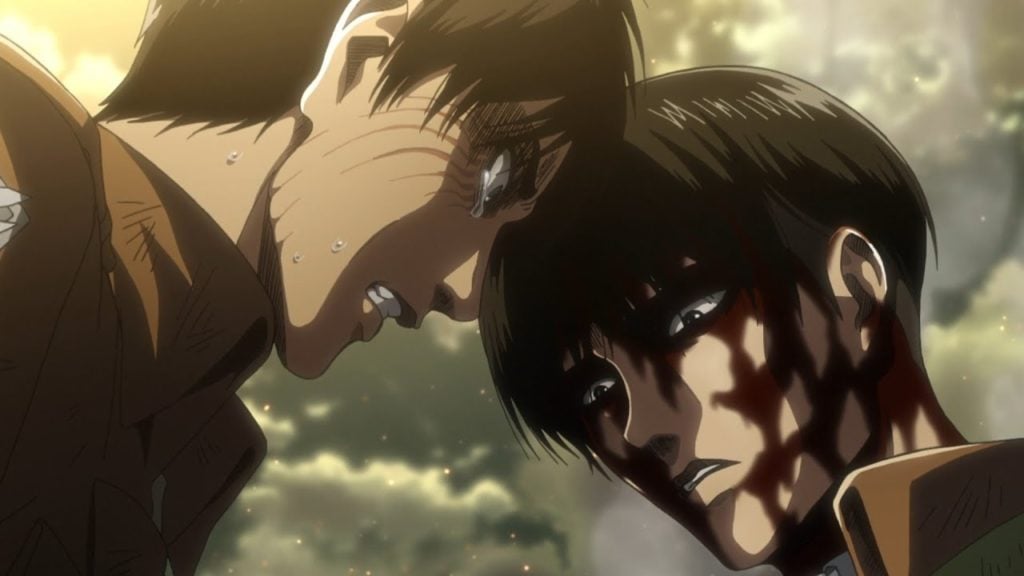 What on earth is happening in this stinger scene?

Based on the events up to and including the finale, the most logical conclusion would be that this has something to do with the vial Levi was left by Kenny and what he chose to do with it. Though Levi tried to surrender the vial, Erwin decided that it was safest with their most deadly warrior, and instructed Levi to use it when and how he saw fit.

Though this is a question in and of itself, since we’re talking about Erwin, we ought to offer a closer analysis of what was really going on between the two of them in Erwin’s office. What exactly is Levi’s game? And why was he so eager to keep Erwin from taking command of the mission to re-take Shingashina and Wall Maria? There’s something being kept from the audience in regard to Levi, but it seems we’ll have to wait until next year to see just what it is.

Speaking of things that have been kept from us, mayhap we’re getting a smidge ahead of ourselves here. After all, we haven’t even discussed the bombshells of “Bystander” yet. Centered around a character we’ve certainly seen a time or two without giving much thought, “Bystander” might be the most shocking and surprising episode of Attack on Titan‘s 3rd season. 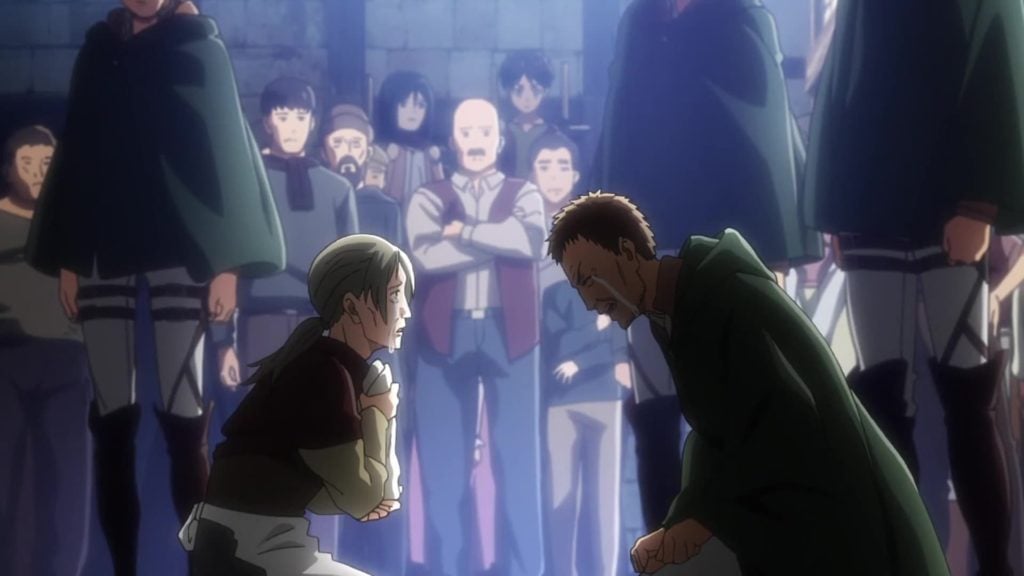 There was quite a pile of callbacks to the history of Attack on Titan in “Bystander.”

For starters, it offers a whole lot of context for why we watched that scene in the very first episode that saw a tearful commander confessing his ineptitude to the mother of a dead soldier. Not only that, but the total gut punch of knowing that Eren’s gear was deliberately sabotaged by Keith Sadies in the second episode is truly devastating, especially when you consider his reasoning: that he hoped Eren would have a good and normal life, like his mother.

In fact, that’s just the beginning of what was revealed in “Bystander” though. We also learned how Eren’s parents met, what went down the night Eren was injected with the Titan formula, and even the revelation that Grisha Jaeger isn’t even from Paradis/The Walls — he just showed up one day on the outskirts of the city with no memory of where he came from.

What this seems to suggest, especially with his time in the underground city, is that he was involved with the Titan conspiracies before either leaving by choice or having his memory wiped by the Reiss family. Maybe both. Either way, few episodes have filled in quite so many blanks in the overall mythology of Attack on Titan than “Bystander” did. Also, bonus points for having Sasha refuse to sit when they visit Keith’s barracks, as though she still wants to prove herself to him after all of these years. 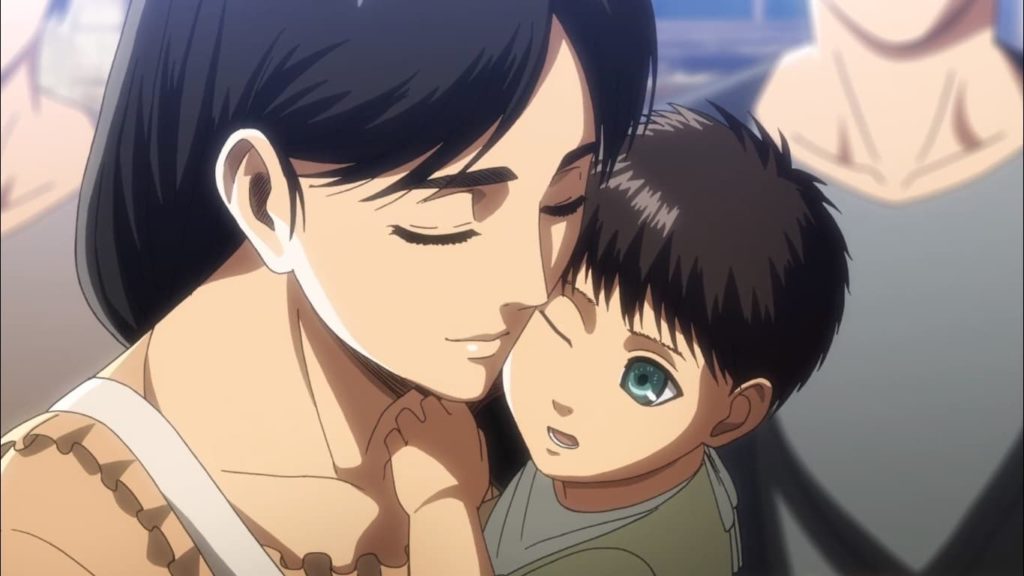 This tender moment between Carla and Eren is what caused Keith to resign his post. It’s also a cruel reminder of how much Eren loved his mother.

This takes us back to the finale, one that was surprisingly melancholic and even-keeled for its place in the series (something that might, again, be explained by that last minute hiatus). Though much of “Night of the Battle to Retake The Wall” was centered around a comic relief-laden celebratory dinner, there was some, ahem, meat to the episode.

Erwin’s steadfastness in the face of duty may figure into that aforementioned flash forward, and it was nice to see him have a moment of true victory after the hardships of losing his arm and being put on trial by the crown. The send-off that the survey corps got in the final moments of the finale was a nice morale booster, not just for the soldiers themselves but also for the viewers after such a heavy season. 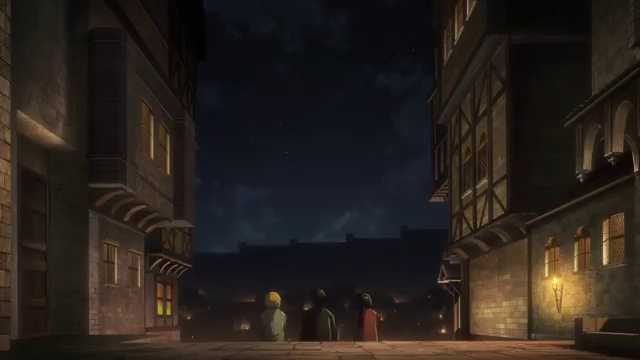 It was nice to see Eren, Mikasa, and Armin together again in a moment of peace during the finale.

With all of that said, it’s truly a bummer that the Executioner from Hell had to show up and cut this season short at the last minute. However, with a shorter wait on hand for the next batch of episodes, things certainly could be a hell of a lot worse. In the meantime, keep an eye out for cracks in that wall.

You can watch Attack on Titan on Crunchyroll HERE.

Golden Wind Puts the “Bizarre” Back in ‘JoJo’s Bizarre Adventure’

‘Hanebado!’ Is More Drama Than Sports Anime (And That Works)