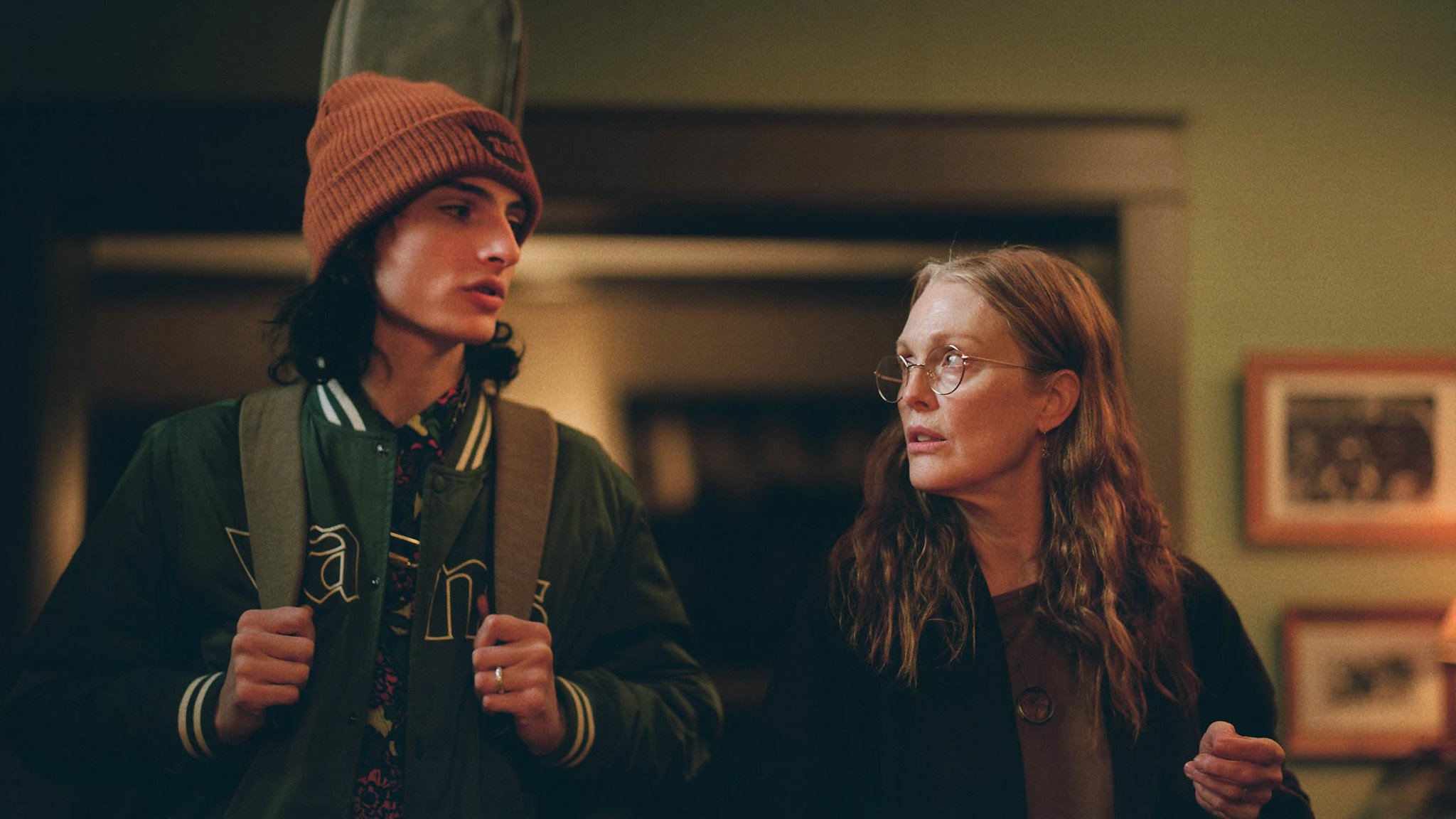 Sundance 2022: When You Finish Saving the World

Livestreaming teenage troubadour Ziggy Katz (Finn Wolfhard) is an asshole. His mother Evelyn (Julianne Moore) is also an asshole. The two embody specific flavors of modern narcissists in Jesse Eisenberg’s When You Finish Saving the World. The film, which is based on a story Eisenberg wrote for Audible, is a promising debut that sees the in actor-turned-filmmaker follow in the steps of his previous auteur collaborators. Eisenberg has become a go-to interpreter for the neurotic stand-ins of high-brow directors, including Woody Allen and Noah Baumbach. With Eisenberg behind the camera, Wolfhard embodies the naifishly confident but insecure young man while Moore plays the erudite and inconsiderate parent.

Unlike the cosmopolitan New York City of Baumbach & Co.’s work, When You Finish Saving the World is set in small-town Indiana. Ziggy is a popular user on the Twitch-like ‘Hi-hat’ streaming platform where he’s amassed thousands of followers, as he likes to remind people. From a cramped space in his bedroom, Ziggy performs his sentimental pop for followers around the world who reward him with tips, social media engagement and an inflated sense of self-importance. Outside of his bedroom door, Evelyn roams the house taking every opportunity to sarcastically deflate her son’s digital empowerment and scold him for not subscribing to the pussy-hat feminism that fuels her sense of intellectual and moral superiority. The two clash with each other at every possible opportunity. Ziggy’s outbursts seem like standard teenage rebellion but Evelyn’s rebukes are surprising in their viciousness. Before one outing when Ziggy says he’ll be down in five seconds, Evelyn takes his statement literally as she counts down each second before leaving without him. It is abundantly clear that these two do not like each other and look outside of their household to express their affection.

Ziggy has a crush on a socially conscious Lila (Alisha Boe), a classmate with whom he nervously tries to relate. His attempts to compliment her politically-minded interests bear no chance. Though Ziggy’s vapid persona gives him the appearance of a complete lack of self-awareness, he knows he is not like Lila and her friends but wants to be. Wolfhard does fine work portraying both sides of Ziggy. He delivers the assuredness when he is the Ziggy Katz who wears his own branded merchandise and trembles his bird-like frame when out of his depth.

Evelyn is in charge of a shelter for abused women and their children. It’s there she meets Angie (Eleonore Hendricks) and her son Kyle (Billy Bryk). Evelyn begins to spend more time with the salt-of-the-Earth Kyle and learns about his life working at his father’s auto body shop. She sees him as a young man with promise and a good heart that she needs to steer in what she considers to be the right direction. She pushes the idea of getting a college degree and offers to pull strings at schools to help him out –a courtesy she did not lend to her own son when he opened up to her about his desire to fit in with the politically progressive kids at school. Evelyn continues to get more and more involved with Kyle’s future becoming a slight obsession where she begins to cover up her efforts and gets jealous when he connects with another woman from the shelter. Moore delivers another outstanding performance as the unsavory Evelyn and continues to be one of the best actors we have.

Eisenberg skewers both the clout-obsessed members of the digital generation and the holier-than-thou New Yorker milieu, exposing them as both egocentric and self-aggrandizing. Ziggy and Evelyn’s pursuits of others have less to do with respect for that person and are more concerned with themselves. They each fetishize the person they’re pursuing as a way to make themselves appear more like the person they want to be. When You Finish Saving the World is a work that clearly reflects Eisenberg’s previous work as an artist and where he might go next. It will be fun to see if he continues to follow in his predecessor’s footsteps as he discovers his own voice as a director and becomes a more assured filmmaker.

Every Day in Kaimuki Explores Naz’s Last Night in Town