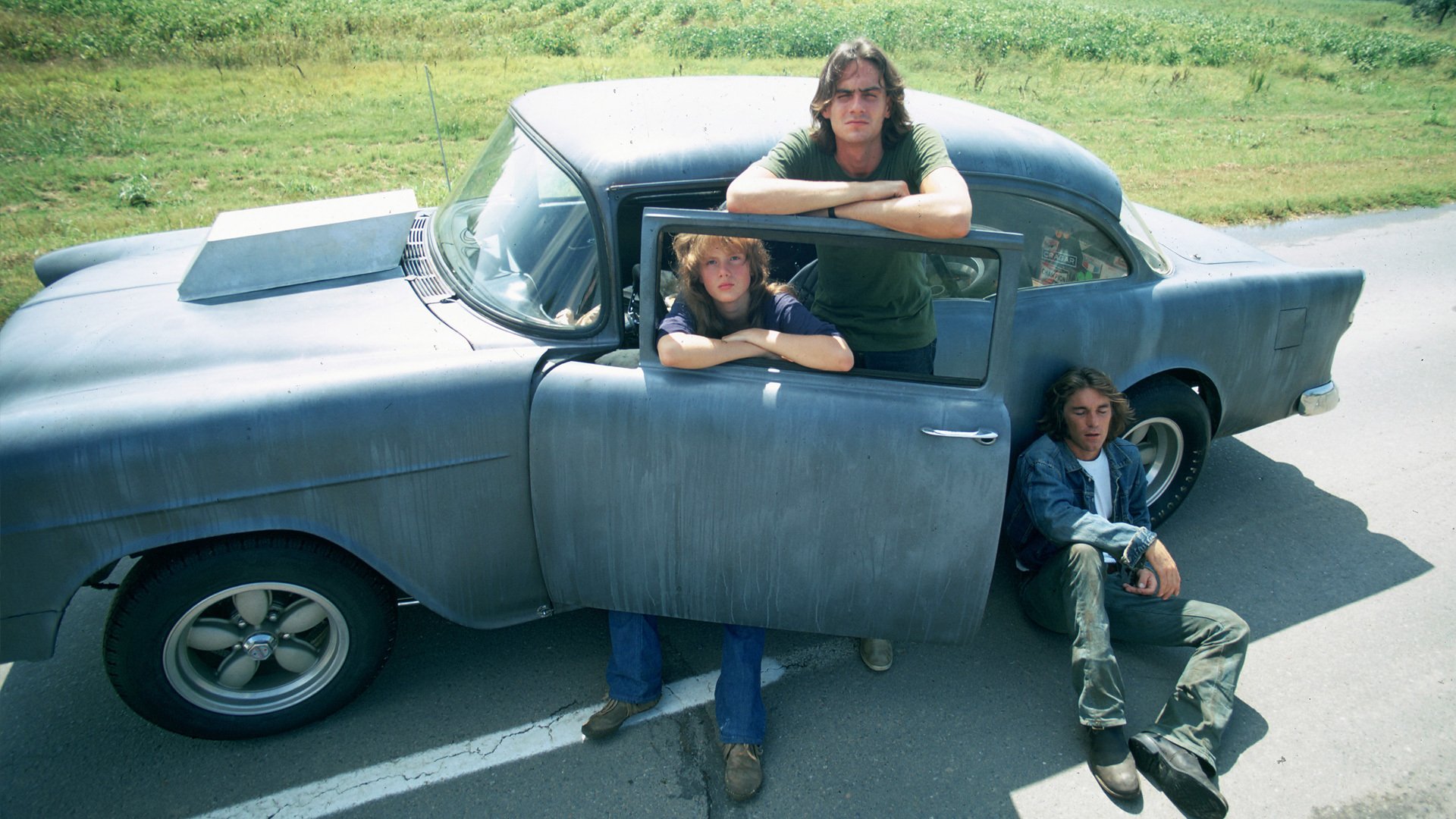 James Taylor is The Driver. Warren Oates is GTO. Laurie Bird is The Girl. Dennis Wilson is The Mechanic. Two-Lane Blacktop is the picture.

Two-Lane Blacktop might be the greatest car movie ever made. This quiet, anti-narrative masterpiece and bonafide cult classic is the best of the ‘existential road-trip’ movies and one of the greatest American films made in the early ’70s. As the pinnacle of director Monte Hellman’s career, it ages better with time. As much as Monte Hellman’s 1971 road movie will forever be associated with Easy Rider, it also springs to mind Dirty Mary Crazy Larry and Vanishing Point. But unlike those two films, Hellman is less interested in allegory nor in the race itself. For a movie about a race, it moves incredibly slow. Two-Lane Blacktop instead explores how three men head out to nowhere in particular. Hellman is interested in the process whereby a passion is subtly transformed into an obsession – and as a study in obsession and emotional dislocation, Two-Lane Blacktop is unlike anything you’ve seen.

After Easy Rider came out, the Hollywood studios were looking for other counterculture hits, and Universal’s Two-Lane Blacktop was hyped as the next big thing. The first draft of the script, written by novelist and first-time screenplay writer Rudy Wurlitzer (who also makes a brief appearance in the film), was published in Esquire magazine, and the film became much-anticipated.

The bare-bones plot revolves around a driver and a mechanic played by musicians James Taylor and The Beach Boys’ Dennis Wilson (starring in their only feature film) who are tired of the California street racing scene and head east across the Southwestern Desert. The two men are hustlers financing their travels by competing with lesser local street-car drivers they know they can beat. Like a western, these guys are ready to outdraw the quickest gun in town. Only these modern-day cowboys don’t have any territory left to explore. Instead, they roam across the country looking for something to do. Unlike Easy Rider, Two-Lane Blacktop isn’t critical of America; it is just about the state of the American frontier.  There is no heavy-handed metaphor here. Along the way, the duo picks up a hitchhiking young Laurie Bird and meets Warren Oates, who gives a disturbing portrayal of a man going through a mid-life crisis. Oates challenges them to cross country race, the winner taking the other’s car.

The fact that Taylor and Wilson are non-professional actors only helps reflect the mood of the pic. Both men are practically silent, and when they do speak, it’s usually about the car. The Driver won’t converse when he’s behind the wheel, and the Mechanic won’t talk when he’s busy working on the Chevy, and that is how they spend most of their time. The car is what they relate to, not each other, and the car is the glue that holds them together. Hellman takes advantage of the lack of exterior emotion from his non-professional actors to emphasize each character’s detachment. A deep depression and sense of withdrawal have set in. They come from seemingly nowhere, are headed nowhere, and aren’t quite sure where they are. The duo never has any long, meaningful conversations, nor do they share a lot of chemistry, but they remain together because they benefit from each other’s professional talents. They might travel as a pair, but both men are downright loners.

Taylor eventually wrote a song about his experience starring in the film “Riding on a Railroad.”

GTO: “Everything is going too fast and not fast enough.”

Oates, one of the greatest and most memorable character actors in the history of American cinema, is fantastic as GTO. This is one of the most well-rounded performances of his career. Taylor and Wilson barely speak, but Oates never shuts up. He’s a chatterbox, picking up hitchhikers along the way (including a young Harry Dean Stanton as a gay Oklahoma cowboy) so that he has someone new to share his stories with. What he says isn’t always true, and his stories will change from one scene to the next. He’s cynical, naive, boastful, lonesome, and phony. GTO knows nothing about cars, but he can afford to drive around in one of the best. It isn’t even important that he wins the race, although he’ll try to make you believe it is. GTO needs to feel like a part of something, and he desperately tries his best to feel young again. Notice how he drives the newest car, so he feels he’s hip and not like a relic of the past. Taylor and Wilson, however, drive an older car romanticizing about a time of yesteryear. Past and present collide, only backward. In fact, everything in Two Lane Blacktop seems backward. GTO makes several mentions of a past he is trying to escape, unlike the Chevy duo, who don’t seem connected to anyone or anything. Was he really a TV producer who tried and failed to make an outlaw automobile film independently? Is any one of his stories true? We know for sure that he wants to be noticed and recognized, but he hasn’t a clue as to how to impress people because nobody is buying his bullshit. At one point, GTO tells a man (Bill Keller) that he used to be a test pilot and that he flew jets but switched to cars because he needed something to ground him. He later tells the Girl that he needs to find the end of the road before he goes into orbit. When we last see him, he’s telling a new story to some new hitchhikers he’s picked up along the way. The characters in Two-Lane Blacktop seems stuck in a vicious cycle, even if on the open freeway. We all know the roads eventually have to end, but they seem content in circling back and around. They have no roots, no responsibilities, and so they keep moving.

In her first of three films, before she sadly took her own life, Laurie Bird plays the drifter who one day hops into the Chevy, making herself feel right at home. No one questions her, and nobody bothers to ask her name. Narratively she serves as a sort of cosmic bond for these men. She’ll ride in both the Chevy and the GTO throughout the race, implying an unspoken competition between the drivers who both take a specific interest in her and seem motivated to impress her. I guess the only thing that can get between a man and his car is a girl. The Driver promises her a trip to Florida, and GTO promises a visit to New York; the only time either seems interested in some destination. In the end, she goes off with another driver.

G.T.O.: “Performance and image, that’s what it’s all about.”

The film makes great use of minimal resources, great locals and frequently relies on natural lighting. Hellman makes the most of the many car interior shots as well; Two-Lane Blacktop is composed of patiently composed scenes with a camera perspective that puts you right inside the Chevy and the GTO, delegating the viewer as an additional passenger. The landscapes and the open road are all the more beautiful in Techniscope. The camera captures information in untraditional ways, such as a sunrise framed unconventionally from the car’s back seat. Still, Two-Lane Blacktop serves as a nostalgic travelogue. In the end, the roads have more of an identity than the characters, and the cars have more personality than both.

Existential is a word often used to describe the films of the American director. Two-Lane Blacktop is primarily a visual, atmospheric experience. As the race grows increasingly dreamlike, the road itself takes on real identity as if it were a place to live and not just a place to pass by. Strangely, this is Monte Hellman’s ultimate statement about freedom. The film’s famous final shot feels inevitable, but it isn’t until the very last frame that you become completely absorbed in the film. It feels like magic, and you’ll find yourself wanting to drive down Route 66 all over again. The road goes on forever, but that doesn’t mean there’s anywhere left to go – but the film – it will forever stand the test of time.

In the end, the film fizzles out as the final shot shows the filmstrip burning up inside the projector, depriving us and the characters of a finish. Two-lane Blacktop might not have a destination, but it has a direction. This masterfully crafted mood piece is essential viewing for any serious cinephile.

We Get Older, Richard Linklater’s Slacker Stays The Same Age