In the mythology of America, is there any city more dangerous, more exotic, more vampiric than Los Angeles? The city of angels has a long-held reputation as a moral wasteland, a hungry beast that chews up youth and beauty and spits out cynicism and broken dreams. It’s probably the quintessential LA story: a young hopeful rides in from small-town America, full of ambition and hope. But before long, they’ve been devoured and egested, sometimes after 15 minutes of fame, but more often not. This time-worn tale is the focus of The Neon Demon, the latest film from Drive and Pusher director Nicolas Winding Refn. But in his usual style, Refn has taken this classic LA narrative and made it his own. Which is to say, he’s made it weird, confusing, oblique, beautiful and divisive.

Elle Fanning plays Jesse, a small-town girl come to LA to pursue a career in modelling. She quickly meets Ruby, played by Jena Malone, and strikes up a friendship with the older girl. But there’s something sinister at play, a dark secret to Ruby and her friends. As Jesse rises through the LA modeling scene, it quickly becomes apparent that she’s in danger of losing more than her youth to the city and its inhabitants.

The Neon Demon wears its numerous influences on its sleeve. Appropriately for a film about the fashion and beauty industries, Neon Demon‘s glossy visuals often mirror what you’d see in magazine and TV ads. Colors pop and lighting pulsates, the image so crisp and polished you’d think it had been airbrushed. But the film also borrows heavily from horror films, more specifically Italian horrors of the 60s and 70s. The use of colored lighting and deliberately alienating performances calls back to Dario Argento in particular, and there’s more than a bit of Argento’s Suspiria in Neon Demon‘s DNA. And of course, there’s a healthy dose of Jodorowsky-style surrealism.

Visually, it’s a very slick movie, machined together with precision and grace. The soundtrack is a chorus of digital tracks that once again makes no secret of its influences. The camera, editing, and production design are often incredibly striking. You could scarcely believe this is the same director who cut his teeth on gritty, grimy Copenhagen crime thrillers.

The performances are (very deliberately) flat and non-naturalistic, with dialogue often delivered in monotones. Characters will act against common sense, something else borrowed from many “Giallo” horror films, but this is all part of Refn’s game. These aren’t character we’re seeing as much as archetypes, ciphers. Refn is saying something here. And what is he saying? The fashion and beauty industries consume youth and vitality.

Which, let’s be honest, you probably knew. The fact that the fashion industry and the standards of beauty that come with it are toxic, harmful forces is something that’s been fairly common knowledge for a long while now. This could be perceived as a flaw in the most obvious of The Neon Demon‘s themes, a sense that the film is preaching to the choir. But to the film’s credit, a well-worn message delivered in an interesting way is still better than nothing.

It’s also kind of a vampire movie. Kinda. Sorta. In a sense. It’s a vampire movie in the broad sense, in that it’s about the literal and metaphorical consumption of youth and beauty. It draws some visual allusions to Elizabeth Bathory, which is probably one of the more subtle ways it gets its point across. And as for the unsubtle ways, well….The Neon Demon isn’t a film for the squeamish. 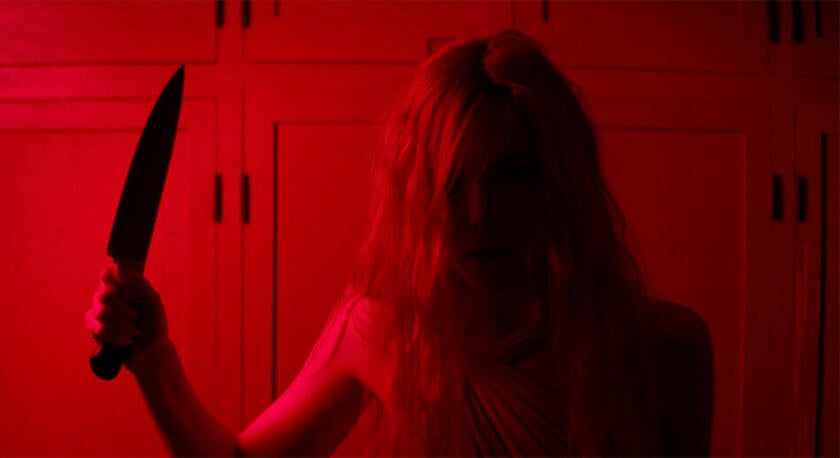 There are those who will be turned off by Neon Demon‘s style. The flatness of the characters, the obliqueness of the narrative, its tendency to wander a bit, its willingness to shock; it’s easy to see how these things will alienate people. This is a movie a lot of people can and have gotten angry at, and probably for good reason. There are times it goes a bit too far, tries a bit too hard to shock and appall. It indulges itself, and while that can be a good thing, it can also lead to some sequences of questionable taste and intent. Did we really need to see Jena Malone do…..that?

But there’s also beauty and complexity to be seen here. As much beauty and complexity as, say, Drive? No, definitely not. While it’s more visually striking and possessed of a more haunting and dreamlike tone, Neon Demon doesn’t quite hit that magic note that Refn did back in 2011. Yes, Refn is saying something with the film, but it’s not something especially bold or groundbreaking. The core message of the film, at least from a surface reading, is that a materialist, consumerist, aesthetically-driven culture quickly becomes destructive for the people within it. A fine message, but there’s the sense that what’s being said has been put forward before, and in more nuanced (or at least, less blunt) ways.

Maybe the increased creative freedom on this project caused him to dive too deep into stylistic indulgence, but whatever the reason, Neon Demon feels more stylistically charged than Refn’s ever been. This makes for a visually sumptuous movie, but one whose imagery feels more hollow than it should.