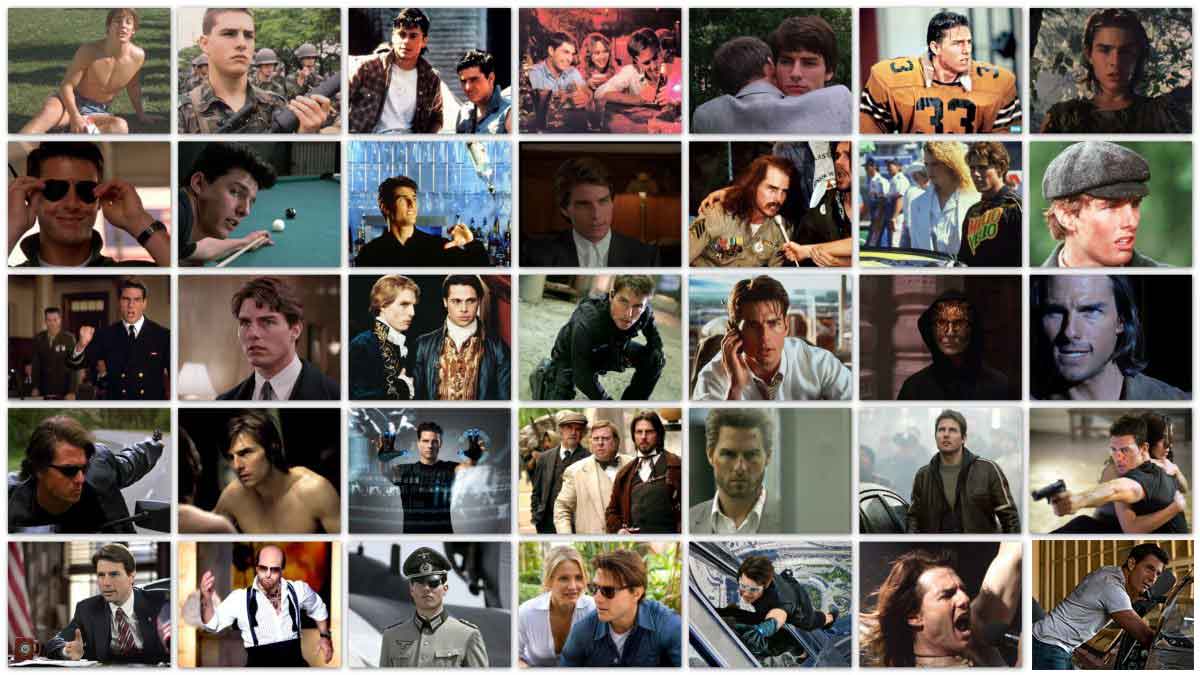 Looking back at the career of Tom Cruise

Anyone growing into pop culture consciousness during the mid-2000s will be familiar with a certain type of Tom Cruise, one labeled with some criticism in this Buzzfeed article as “Tom Cruise 2.0.” To them, Tom Cruise may have first become familiar as Ethan Hunt in the first Mission: Impossible movie, as an action star who, in spite of fearful insurance agents and publicists, prefers to do his own stunts—especially if they include declaring maniacal love for Katie Holmes atop Oprah Winfrey’s couch. He was probably their first introduction to the alien world of Scientology, or perhaps already known as the face of another hero thrust into the supernatural, having once served as the model for the titular character in Disney’s Aladdin.

This Tom Cruise, in spite of several critical successes in the past, has yet to shake completely the straws of tabloid fodder that prick up every time someone dares, for example, to bring up his ex-wives or his religion, or even when they don’t. This is a Tom Cruise famed for being a bit silly in the eyes of the public, to the point where many younger consumers seem to forget that Tom Cruise 1.0 is a three-time Academy Award nominee and winner of three Golden Globes, as well as one of the most lucrative producers in the film industry today.

After landing his first Mission: Impossible role, Cruise’s negotiations with Paramount earned him a near-unprecedented 22 percent of the film’s total receipts (that’s about $70 million), practically paving the way for stars to become full partners with studios. It was in light of this first of a series of negotiations that economist Edward Jay Epstein declared Cruise—along with heavy hitters like Steven Spielberg, George Lucas, and Jerry Bruckheimer—“one of the handful of producers who can reliably deliver a billion-dollar franchise,” which means that Cruise remains one of Hollywood’s most formidable forces both on screen and behind the scenes.

To be fair, Cruise entered the game with a pretty large handicap in his favor, landing his first film roles at the age of 19 alongside names like Brooke Shields, Sean Penn, and with 1983’s The Outsiders, pretty much every young male actor (plus Diane Lane) who made it big in the ‘80s. His twenty-first year also brought him his first leading role and Golden Globe nomination for the social satire Risky Business, the film often credited with launching Cruise into stardom. In his glowing four-star review, Roger Ebert even praised Cruise’s performance as one of the movie’s highlights, crediting him as an actor who knew “how to imply a whole world by what he won’t say, can’t feel, and doesn’t understand.”

Top Gun arrived in 1986 with less critical aplomb but compensated with the chart-topping “Take My Breath Away” and a role that cemented Cruise as one of the biggest names in Hollywood. From that moment on, Cruise’s celebrity status rose in tandem with his roles in several more films beloved by voting committees and audiences alike, creating characters that have managed to remain fresh and interesting in spite of Tom Cruise 2.0.

Rain Man, for example, hit screens in 1988 and swept the floor at the successive Academy Awards, pairing Cruise alongside Best Actor winner Dustin Hoffman, who won for his role as the autistic savant, Raymond Babbitt. When the Vietnam War drama Born on the Fourth of July rolled around in 1989, Cruise earned his first Oscar nomination for Best Actor against Daniel Day-Lewis, Kenneth Branagh, Morgan Freeman, and Robin Williams—some of the greatest actors recognized to this day. Even more notable is the fact that Cruise did win the Golden Globe over Day-Lewis, plus his additional contenders in Jack Lemmon and Al Pacino.

In 1992’s Irish immigrant romance Far and Away, Cruise brought the world its first hint of the gossip train that would follow him later on, starring with his then-wife Nicole Kidman, whom he’d met whilst working on Days of Thunder in 1989. Even novelist Anne Rice jumped aboard when news surfaced that Cruise had been cast as the vampire Lestat in Interview with the Vampire: The Vampire Chronicles in 1994—something Rice was not happy about. Still, Cruise managed to come out on top yet again once the film premiered, after which Rice released a personal statement oozing praise for Cruise’s performance, in which she wrote, “The sheer beauty of Tom was dazzling, but the polish of his acting, his flawless plunge into the Lestat persona, his ability to speak rather boldly poetic lines, and speak them with seeming ease and conviction were exhilarating and uplifting.”

Cruise made good on that praise by earning his second Oscar nomination for the titular role in Jerry Maguire, a film awash with stand-out performances (Cuba Gooding Jr. Would win a Best Supporting Actor Oscar for his role as wide receiver Tod Tidwell). Just a few years later, with the release of Paul Thomas Anderson’s Magnolia, Cruise would pocket his last Oscar nomination to date, earned in the midst of an already talented ensemble cast.

Cruise had already become the action star lead in Mission: Impossible by this time, and would soon reprise the role in 2000’s Mission: Impossible II, shortly before his divorce from Nicole Kidman and his devotion to Scientology began to overshadow his achievements as an actor. And yet, regardless of the way news outlets and casual fans continue to note how Cruise’s reputation for unusual antics and beliefs might continue to harm his career, he hasn’t come close to disappearing from the limelight.

After all, Cruise still had cult-favorite Minority Report under his belt, along with The Last Samurai, Collateral, and War of the Worlds, the latter of which was, at the time, Cruise’s highest-grossing film ever. The last five years have also renewed action-hero Cruise in 2012’s Jack Reacher, the post-apocalyptic Oblivion, and the surprise favorite military sci-fi Edge of Tomorrow (which may, by the way, see a sequel one of these days). Cruise even showcased his R-rated comedy chops—albeit in near-unrecognizable form—in 2009’s Tropic Thunder. In lieu of this variety, some could still argue that Cruise is less associated with his eponymous status in the 80s and 90s, but he was, come 2012, the highest-paid actor in Hollywood.

All things considered, whether the subject be Tom Cruise 1.0 or the actor-turned-character Tom Cruise 2.0, the man behind the camera—preserved in history as arguably one of the most beloved, most recognizable stars in the history of cinema—is, perhaps, someone to be grateful for. From the snarky teenager Joel Goodson dancing around in his underwear, to the five-time Impossible Missions Force agent Ethan Hunt, Cruise can always be trusted to put on a good show, whether on or off-camera.

Taxi Driver: Inside the Mind of Travis Bickle