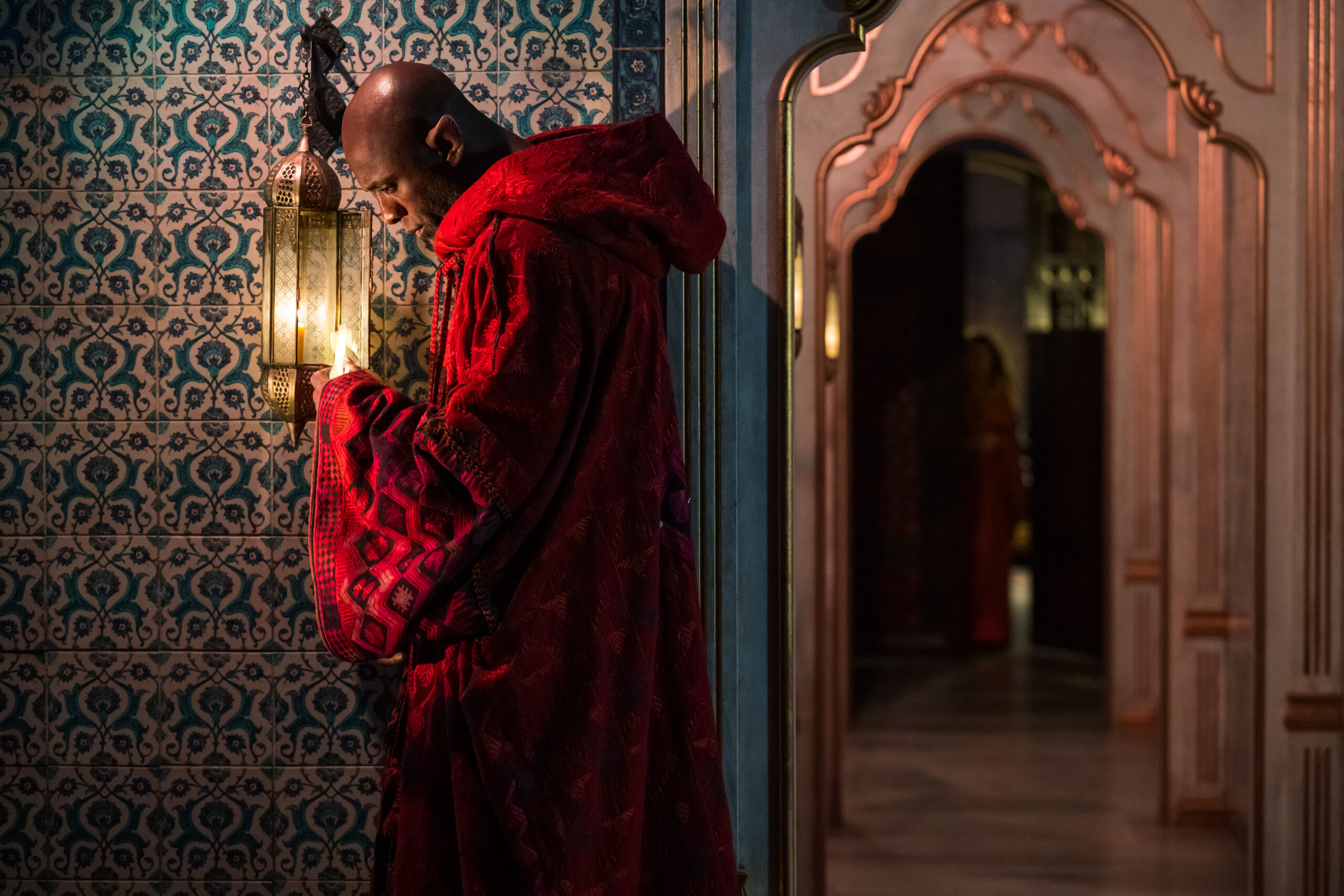 George Miller’s films are the stuff of legends. They include parents who find a cure for their son’s rare and fatal disease; a penguin who can tap dance like Savion Glover; a man that performs heroic acts in a post-apocalyptic Australian outback; and, perhaps most impressive, a pig who can herd sheep. His penchant for the unusual and fantastic is the perfect source material from which his overactive imagination can be transposed to the screen. Miller delivers another tale of remarkable circumstances– one that interrogates the concept of legends themselves with Three Thousand Years of Longing,

It’s been seven years since Miller allowed us to witness the legacy sequel masterpiece Mad Max: Fury Road. In his much-anticipated follow-up, Miller doesn’t shy away from ambition but eases his foot off the accelerator pedal to give time to dialogues about how, what, and why we tell stories. While exploring the art of storytelling, Miller continues his predilection for lonely protagonists. Dr. Alithea Binnie is a particular and solitary narratologist, played brilliantly (of course) by Tilda Swinton and the stoic but vulnerable Djinn is played brilliantly (of course) by Idris Elba. Miller utilizes the Djinn’s history of being trapped in various containers to create distinct episodes of lush fantasy, each one more delightful than the next. Just as in Fury Road, Miller’s creativity and attention to detail make for a cinematic experience that rewards itself on repeat viewings.

Alithea is reason incarnate. Her days are clean and measured much like a walking stock photo. She is content with her life in academia, committing herself entirely to the study of stories throughout history. She admits to no further desire other than to continue her quiet life of research. This is an enormous problem for the Djinn she’s unleashed from a bottle she purchased at the Grand Bazaar in Istanbul. The Djinn can only be truly freed once he’s granted Althea her heart’s desire in three wishes (of course). Not only is she skeptical of the Djinn’s existence, but it doesn’t take a narratologist to remember that all stories of genies granting wishes end up as cautionary tales. As Alithea tries to logic her way through the complexities of wish granting, the Djinn recounts to her the stories that lead to each of his millennia-spanning imprisonments.

His stories are wonderfully realized parables of ancient civilizations, royalty, lust, and longing; all of which center on a subject who is trapped in some way.  Her belief in him solidifies once, like a good story, she relates to his pain and yearning and the confined protagonists of his tales. This allows her to confront and accept the emotions she’s been suppressing, literally, in a box. Alithea learns to loosen her calculated grasp on the practical and indulge in the messiness of humanity.

The conflict between logic and legend, mythos and science is one of the veins of the film. In our world of consumer space travel and TikTok filters, the wonder of fairy tales has been replaced with the magic of modernity. Gods and monsters have been reduced from the awesomely possible to mere metaphors and wizards supplanted by scientists. Miller posits that technology is great and all, but not only is there a place for wonder and the fantastical, it’s an important part of being human.

Miller moves from the austere wastelands of Fury Road to the comfort of hotels, palaces, and London townhouses. The roar of pistons and war boys imploring those around to ‘witness them’ are not conducive to the conversations about storytelling and desire that take centerstage. The sadness that lies beneath Elba’s innate silent authority gives an immediate solemnity to the Djinn. In lesser hands, much of the wisdom and grandiloquence the wish-granting creature recites could have come off as hollow and saccharine. Elba’s presence gives credence to lines like “she was not beautiful, she was beauty itself” and “hope is a monster and I am its plaything.” Elba embodies the immortal being as something that is imperfect and still trying to figure out how to “get it right.” He grapples with the same questions humanity has had a long time to figure out but each person still struggles to answer in their relatively abbreviated existence.

The Djinn’s stories detail his mistakes as Alithea begins to interrogate hers. Swinton is also spectacular casting as a person living a nearly automated life who begins to crack despite her boundless intelligence and self-assurance. She is forced to come to terms with the idea that love is not something cured by reason. And in doing so, she finds happiness in the irrational.

Except for a bit of shoehorned commentary on xenophobia, the sprawling mix of elegant storytime vignettes and introspective discussion settles into an enjoyable rhythm. Just as you begin to have the itch for another Byzantine adventure, Elba tucks you in for the next mystic interlude filled with hairy-legged beauties, an enchanted one-man band, and a bottle-collecting sex slave.

While Three Thousand Years of Longing is not a non-stop, diesel-fueled odyssey, it’s a film that is entirely George Miller’s and one that sees him continue his unique maturation as a filmmaker. This time, Miller flexes the muscles that were less important to Fury Road. His outlandish imagination and detailed approach to filmmaking remain as do his loner protagonist, lavish dream-like worlds, and scene-stealing big girls. Miller looks at storytelling and asks the question ‘what are fantastical stories good for in an age of (relative) reason’ and answers with the very same film. They entertain, they contemplate, and they rule.