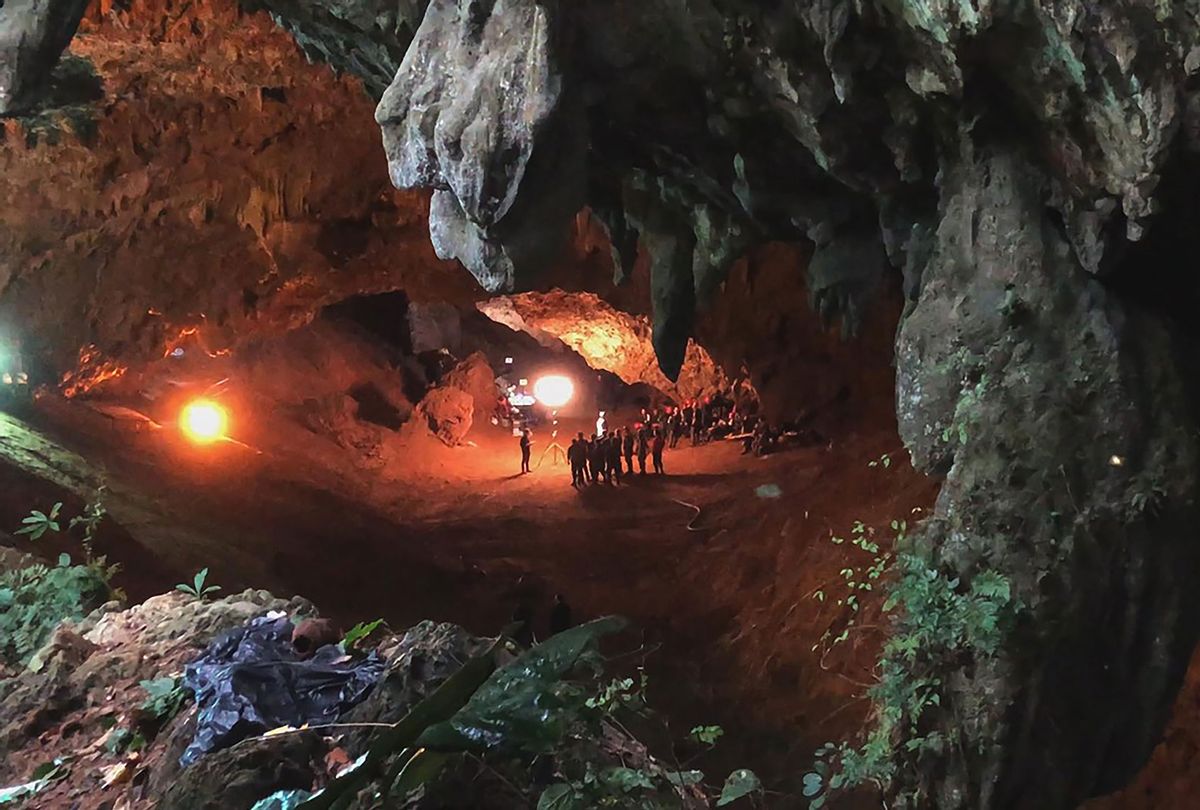 Back in the summer of 2018, a group of 12 boys was trapped in a cave in Thailand, along with their assistant coach. After they were stuck in the cave for more than a week, a group of hobbyist cave divers, Thai Navy SEALs, an unconventional doctor, and others worked to rescue them. As the entire world watched, the team successfully rescued all 13 of them. Two of the Thai SEALs, Saman Kunan and Beirut Pakbara, lost their lives on the mission.

This story, needless to say, nearly immediately set off a scramble to adapt it for the movies.  Around the same time, the Philadelphia Twitter personality @FanSince09 spent an entire day mapping out an inevitable future movie about the rescue in which Mark Wahlberg would play the incongruously Bostonian rescuer of the boys.

The fictitious film, almost certainly directed by Peter Berg, would follow all the usual beats of Wahlberg/Berg projects like Lone Survivor, Patriots Day, and Deepwater Horizon, along with Wahlberg’s own stated fantasies about personally foiling the 9/11 attacks. In the pretend movie, Wahlberg’s blue-collar hero out-toughs the “posh idiots” and feckless bureaucrats standing in his way, while also defying his angry wife (“Thailand? What about YOAH Family, Mickey?”)

The clear template is Patriots Day, in which the Boston Marathon bombing of 2013 was retconned to make all of the heroism accrue to Wahlberg’s fictional cop hero, Tommy Saunders. The Thai rescue was notably an international team effort that included thousands of people, most of them not American, but it’s not hard to imagine Hollywood turning the story into a vehicle for a solitary Yankee hero.

In the three years since, the seemingly inevitable Wahlberg version has yet to happen, although Ron Howard has his own scripted version coming called 13 Lives (with Viggo Mortensen, Colin Farrell, and Joel Edgerton), and a Thai-produced version called The Cave came out in 2019.

Now we have the first major documentary about the rescue, and it’s called, simply, The Rescue. It’s produced through National Geographic and directed by Elizabeth Chai Vasarhelyi and Jimmy Chin, the duo who made the Oscar-winning documentary feature Free Solo.

While it’s not quite the thrill that Free Solo was, The Rescue is a worthy telling of this inspiring true story.

Fresh off rapturous notices out of the Telluride and Toronto film festivals, The Rescue hits theaters Friday. Interestingly, the documentary story rights were split between the Rescue filmmakers and a Netflix-backed crew. This film tells the story of the rescue team, while Netflix at some point will tell the story from the mouths of the rescued soccer players and coach themselves.

The Rescue is a success, one that’s nerve-wracking and dramatic — albeit quite to the degree that Free Solo was — even though everyone watching knows exactly how it ended. With the use of a great deal of footage that was filmed at the time, both inside and outside the cave, we see the divers, SEALs, and others mobilizing for the mission.

On Day 11, about 45 minutes into the two-hour film, the team discovers that the boys are alive inside the cave. But getting to them is the truly hard part, and most of the movie depicts that mission. They faced “two ticking clocks”- the fear that the boys could run out of oxygen, and another monsoon could arrive and kill the whole effort.

The rescuers emerge as fascinating characters; one admits he skipped a friend’s “stag do” in order to participate in the rescue.

Some American Special Forces did show up at one point, while Elon Musk also offered the services of a submarine and some engineers in the rescue. After one of the cave divers called it a “PR stunt,” Musk called him a “pedo guy,” leading to a lawsuit that Musk ultimately won. The film omits this episode.

The film ends, unfortunately, with an egregiously awful closing-credits song, which I fully expect to be nominated for the Best Original Song Oscar.

While it’s not quite the thrill that Free Solo was, The Rescue is a worthy telling of this inspiring true story.

A24’s Lamb is a Wild Story of Inter-Species Parenting