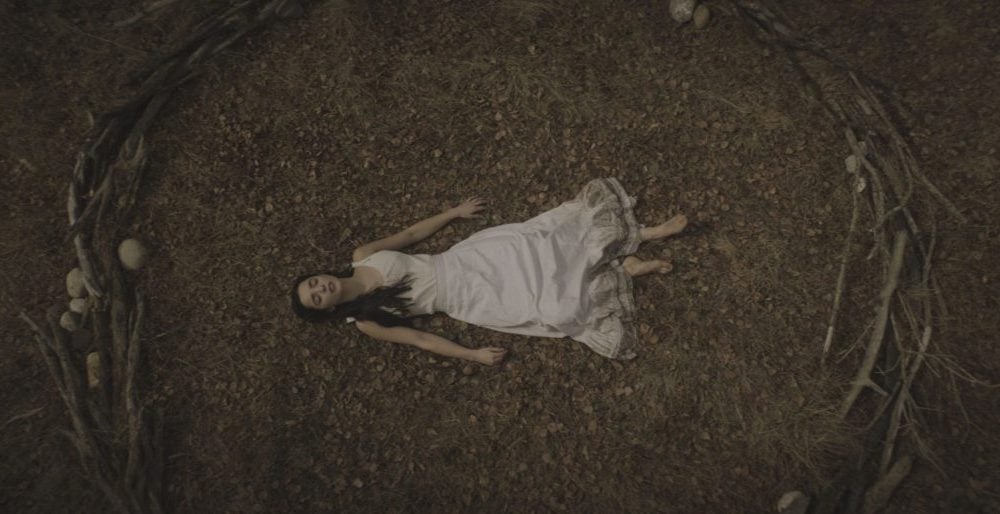 You would be hard-pressed to find someone who didn’t enjoy Robert Eggers’ folk-horror hit, The Witch (2015). Following the tale of a Puritan family that’s plagued by suffering, sorrow, and supposed witchcraft, the movie is a masterclass in both storytelling and costume dramas. So when it was announced that the Fantasia Film Festival would be hosting the world premiere of Thomas Robert Lee’s The Curse of Audrey Earnshaw, the bar was set exceptionally high. Unfortunately, it seems the bar was set a little too high for this Canadian film to clear it.

The movie follows a small, Irish, Protestant community as it struggles against the ever-present threat of illness and starvation, due to crop failures and livestock deaths. We also explore the tenuous relationship between Audrey (Jessica Reynolds), a young woman gifted with black magic, and her mother Agatha (Catherine Walker), who has kept her daughter a secret from the townsfolk these past seventeen years. An altercation between Agatha and Colm (Jared Abrahamson), a man mourning the death of his son, sets the town ablaze with madness and tragedy, and the film culminates in what’s supposed to be a startling revelation about Audrey’s father.

This film is a frustrating watch, as it repeatedly fails in areas a period piece should excel at. The costumes, although well designed, clashed with the film’s modern makeup choices (in more than one scene, Audrey seemingly has lipgloss on). The set design paints a vivid picture of what seems to be the early 1900s, only for a jarring shot of a car to ruin that image. Beautiful and tragic shots of landscapes are killed by a dreary monochromatic colour and heavy-handed use of a smoke machine. What’s perhaps most disappointing, however, is the development of Audrey’s character.

The Curse of Audrey Earnshaw promises audiences a horrifying journey into witchcraft but fails to deliver.

The film opens on Agatha telling a man that, despite his starving family and her abundance of crops, she can’t sell them to him. We then see Audrey in a cotton shift asking her mother why she couldn’t help him. Agatha explains how it was done to keep them safe, and then both women fall asleep in bed next to one another. It’s a tender moment where Audrey comes across as naive and innocent. Nothing about this introduction to her character suggests that she’s about to shout at her mother and call her weak. Nothing about this interaction shows Audrey understanding the townspeople or their motivations. And yet only a few scenes later, Audrey is seducing a married man, cursing his wife to a monstrous pregnancy, and driving the men in town to kill themselves.

It should be said that there is nothing wrong with villains who are objectively, irredeemably, evil. There’s even something fresh about having a villain who’s just bad for the sake of it. Not every villain needs to be humanized or given a backstory that helps justify their actions. However, when you establish the title character of your film as innocent, naive, and as having a seemingly loving relationship with her mother, you can’t make her the antithesis of all that without explanation. It’s disappointing that Audrey never came into her power organically. There are so many opportunities to show Audrey outgrowing the dynamic she has with her mother, to show her maturing into an unstoppable young woman, and instead, they’re just wasted potential.

Although The Curse of Audrey Earnshaw promises audiences a horrifying journey into witchcraft and madness, it fails to deliver on any of them. Our suggestion: save yourself the 90 minutes and watch The Witch instead.

Fantasia 2020: Clapboard Jungle Shows One Man’s Struggle to ‘Make It’