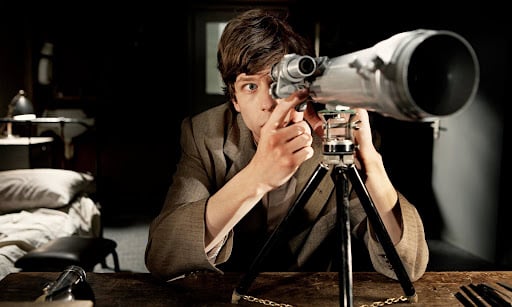 Better to have an ungainly surplus of ideas than none at all; that seems to be Richard Ayoade’s philosophy behind The Double, a wild, uneven, but never dull sci-fi black comedy that purports to tackle Dostoevsky’s novella of the same name, but is at least as interested in pilfering visual ideas from films gone by while marrying them to Ayoade’s winningly dry comic sensibility.

Set in a bleak retro-futuristic dystopia, The Double stars Jesse Eisenberg, who amplifies his usual bumbling manner for slapstick’s sake, as Simon James, a number-cruncher at a massive corporation whose precise purpose is deliberately ambiguous. Simon dreams of climbing up the corporate ladder by earning the praise of his boss (Wallace Shawn) and makes pathetic attempts to flirt with a fellow employee, Hannah (Mia Wasikowska), but his persistent meekness terminates his efforts before they can get off the ground. Before long, Simon finds himself confronting a new hire, James Simon (also Eisenberg), who happens to be his precise physical doppelganger, only his behavioral and psychological opposite, brimming with confidence and self-assuredness. At first, James and Simon forge a mutually beneficial friendship, but James quickly sets out systematically dismantling Simon’s already-dim existence.

Despite the film’s literary inspiration, The Double most resembles Terry Gilliam’s Brazil. Both films exhibit pitch-black humor, a grimy retro futurescape, a skittish protagonist whose identity and relatively stable position are threatened, a love story involving a less-than-fully-realized woman whose agency is secondary to the whims of the protagonist, broad corporate satire, and even dysfunctional mother-son relationships. The primary distinction to be made between Gilliam and Ayoade is that The Double‘s take on the possibilities of redemption is even bleaker; Simon is a creep at the best of times (he spends much of the film obsessing over Hannah with the help of a telescope) whose plight is less David vs. Goliath, more Man vs. Himself. The self-annihilating aspect evokes a number of previous touchstones, particularly Fight Club, and while Eisenberg is consistently engaging in both roles, Ayoade doesn’t have anything new to put forward on the subject.

Luckily, Ayoade, unlike nearly every other comic to make the transition into directing, is as interested in crafting a striking aesthetic as he is in smuggling humor into a relentlessly bleak environment. The Double cribs from film noir, music videos, and, yes, Gilliam (an early tracking shot through Simon’s office is a clear, direct Brazil nod) with aplomb, taking particular joy in implying the insidious presence of James long before he actually arrives by nearly always placing Simon off-center. The obsessive attention to detail almost reaches Edgar Wright-levels of craft, and that’s a very encouraging sign for Ayoade’s future.

Tackling dystopian world-building, absurdist humour, social satire, and a high-concept narrative hook in the space of 85 minutes (excluding credits), The Double can sometimes feel more like a showcase reel for Ayoade’s considerable talents than a cohesive movie on its lonesome. Nevertheless, when it clicks, the film serves as an encouraging reminder that there are still a few genuine stylists left in film comedy.