When you are so rich that you don’t need to work, and you have everything you could ever possibly need, what else is there for you to do? According to The Cannibal Club, a porno-horror satire of the Brazilian upper-class, you have lots of sex and eat lots of people. Starting off highly promising, weird, and rather sexy before running quickly out of ideas, The Cannibal Club really feels like it should’ve been a short film instead of a full-blown narrative feature — there isn’t enough meat on this movie’s bones.

Gilda (Ana Luiza Rios) and Otavio (Tavinho Teixeira) have their special kink all worked out. They hire someone to take care of their house, then hand him a gun and tell him to look out for strangers. Later, Gilda seduces the caretaker, and while they are having sex, Otavio kills him. Unafraid to shy away from frank nudity but smart enough to cut away before the axe comes in, this scene is played for laughs and a bizarre kind of eroticism. When the couple argues over dinner about trivial matters, the scene is given great comic weight because they do this while literally eating another human being. They’ve done this a hundred times.

It’s a strong opening, but the story doesn’t know where to go from there, circling around the same ideas without ever ramping up the intensity. Otavio owns a security firm and is a member of the eponymous club, run by a shady figure called Borges (Pedro Domingues). At special events they watch ritualistic sex acts a lá Eyes Wide Shut, before dining on the finest human flesh that money can buy (which is weird, because it’s almost the same as what Gilda and Otavio do — so what’s the big deal?). Like so many powerful people who do terrible things, these people believe that their society helps the country at large (although beyond one powerful-yet-ambitious speech by Borges, this isn’t explored in any real detail.) But when Gilda sees Borges doing something he shouldn’t, she and Otavio start fearing for their lives.. 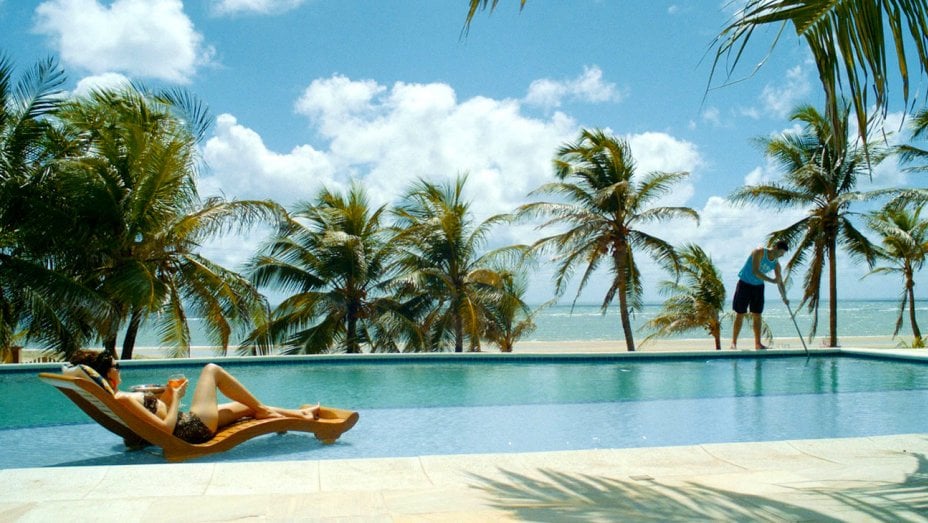 There is an allegory somewhere here about how the rich are so powerful that they can literally eat the poor and get away with it, but there isn’t any real depth or progression to this satire, starting at one level and staying there throughout. Coming in at only 80 minutes, there is a lot of padding, scenes of characters walking through gardens and hallways in order to find nothing really shocking taking up a significant amount of the runtime. Unsure whether to commit to oddball comedy, full-blown horror, or sly arthouse satire, The Cannibal Club lacks any real bite. Perhaps it would’ve worked if the central relationship between Otavio and Gilda was really based in trust, consent, and love — and then also that they like killing and eating their staff. Instead, they seem barely interested in each other, and give us no explanation as to why they enjoy engaging in these activities, giving us little reason to actually care about them.

By the end (which is inevitable and deeply unsurprising), The Cannibal Club loses a lot of its intended satirical effect. Although a humorous diversion and a good laugh at the rich, it never goes beyond its surface-level Hannibal-esque pleasures to see what really lies beneath. In other words, this dish is cold.