It’s going to be hard for anyone to watch Luca Guadagnino’s re-imagining of the classic 1977 Dario Argento-directed Suspiria if they’ve seen the original first. The same applies the other way around. It is very apparent that Guadagnino and writer David Kajganich saw the original and said “Well, why not do ‘x’ instead of ‘y'” for virtually every moment. The knee-jerk reaction of many will be contempt for this version even attempting to evoke the Suspiria name for such a radically different beast. However, those people would be missing out on one of the best horror movies of 2018, and one that says so much more than the original ever even considered.

It’s going to be difficult for viewers to not compare and contrast the two, and they do essentially clash at every moment. The most stark opposition is in the setting, and how much it matters to the new Suspiria. Set in 1970s Berlin, Susie (Dakota Johnson) is enrolled as a student at the Markos Dance Academy, and quickly catches the eye of its head teacher, Madame Blanc (Tilda Swinton). She takes on the lead role in the troupe’s latest dance while befriending Sara (Mia Goth), who was friends with Blanc’s previous star pupil, Patricia (Chloe Grace Moretz), who has run away from the academy believing all of the faculty to be witches.

Suspiria doesn’t just let audiences know right off the bat that there are witches; it instead plays with presumption that there are some. From that point on, the film becomes something far more sinister. It’s inevitable that evil not only exists, but will manifest itself at some point during this movie — that all your fears are true, and it’s unlikely you’ll be able to stop it, as evil is rarely noticed until it’s too late.

This version doubles down on its setting by bringing in the Berlin wall and a history of evil and division. The Markos Dance Academy consists of all women, with every member of the faculty being somehow involved in the eerie behind-the-scenes of the institution. Meanwhile, as Susie becomes closer to Madame Blanc — treating her almost like a motherly figure — Sara tries to discover more about the disappearance of Patricia with the help of Dr. Josef Klemperer (Lutz Ebersdorf). 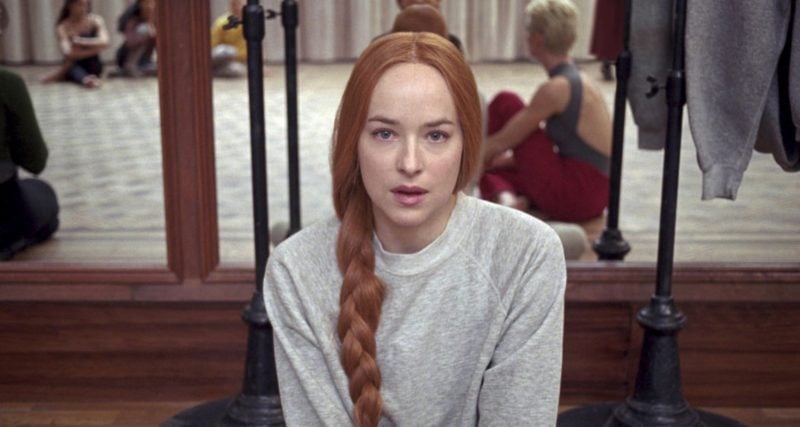 It is the inclusion of Klemperer that makes it abundantly clear that this is a different kind of beast. His character acts as sort of a detective trying to figure out what is happening within this dance academy, but he has his own past defined by evil that propels him towards investigating further. That is what a lot of Suspiria tries to confront: a past of evil. It just does it in the most arthouse, grandiose way imaginable. It’s bleak, with plenty of beautifully haunting imagery to complement a tone set by its chilling Thom Yorke score. The whole film wields a melancholy that gets underneath your skin. The walls breathe heavily and quickly, and the presence of something sinister is highlighted through creepy noises within the academy.

But what defines this re-imagining most is its brutality. Believe it or not, the director of Call Me By Your Name and A Bigger Splash has crafted some of the most horrifying body horror sequences in recent memory. An early scene immediately evokes a sense of terror and fear, catching audiences off guard with its brutality. The scene is edited so wondrously against a solo dance routine (which itself is violently beautiful) that it becomes hard to think of anything else but that moment. Afterward is followed by further explorations into the Dance Academy and its ulterior motives, filling the rest of the film with dread until its bloody and audacious climax. Suspiria utilizes violence to punctuate its themes, to show that it’s not just the fear of evil that sustains, but the reminder that evil is very much alive.

Perhaps most surprisingly is that Guadagnino hasn’t created a movie that just reminds us that evil exists; it reflects on and feels heartache for the world’s suffering. It’s hard to believe that this movie has a heart to it, as a lot of the time is spent reveling in its sinister tone and acknowledging the inevitable. Suspiria isn’t just trying to make you recoil in your seat — it’s trying to make you react and respond to the shock. It wants you to feel empathy, not just sympathy. It does that by having the strong leads of Johnson and Swinton. Swinton embodies a motherly presence, one that feels strict yet caring. Meanwhile Johnson’s innocent, eager, and prideful Susie is the perfect character to carry the film. She provides her own sense of mystery, with a vague, unknown background that pretty much feels like an assault on Argento’s version of Susie by having that background matter. 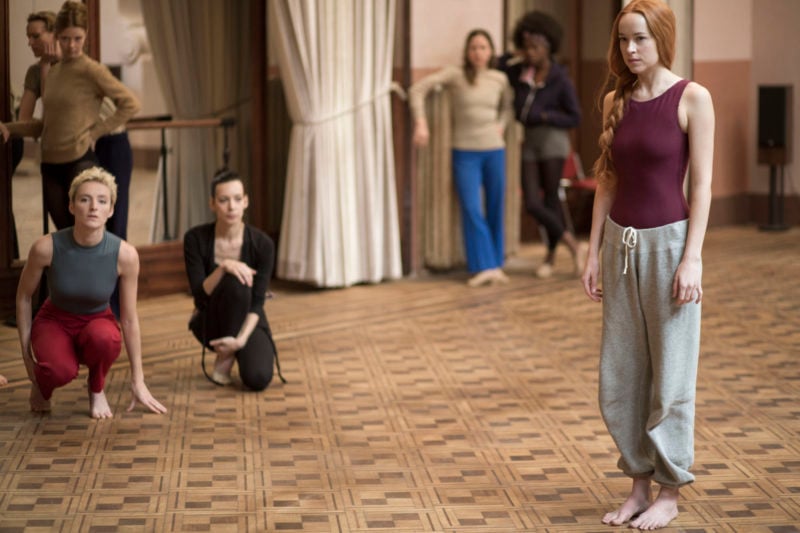 Suspiria is going to be divisive among critics and audiences alike — that much is clear before even stepping into the theater. It immediately feels like Guadagnino goes left whenever Argento goes right, and he dives deeper into elements just casually presented in the 1977 film, giving it a much beefier runtime, but one that feels just as long as the original.

Bold doesn’t even begin to describe Suspiria. Its violence is gruesome in a way that you feel instead of cheer at. Its color palette is so much less vibrant, with only reds being accentuated against the very drab, pale palette now. There’s much deeper meaning in this intentionally bleak new version; it’s not so much an assault on your senses like the original, but more of a subtle creep into your soul. There’s a statement being made, and by the end you will feel it. Suspiria is the perfect example of how to handle a remake, and hopefully it will be enough for other fans of the original to celebrate the reverence and audacity that the new version embodies so well.

The Conjuring Franchise and Catholicism