Connect with us
The books of Stephen King have influenced pulled at me over many years and many visits to the stack of books by the toilet.

From the tender ages of twelve to eighteen, I swam through enough Stephen King to significantly alter the shape of my mind. There was little common ground between myself and the rest of my family growing up in the late 80’s and early 90’s, but the bulk of it existed in the teetering stacks of Stephen King books that stood stationed next to our first-floor toilet. My big brothers were bad kids, and I was the arty little weirdo in their wake, content to keep my head down until it was time to get out, though quietly convinced that they were as cool-as-cool-could-be even while enduring their abuse (and snatching their discarded books). King united us as more than the drowning children of a shattering divorce; we were all Constant Readers. The words he wrote made me feel part of something in ways that extended beyond the borders of our crumbling suburban walls.

Among my kin, books were a crucible, a bridge to cross into young adulthood before getting down with rock music, drugs, and other illicit behaviors. First came the elves, then came the horror. King was filed just below the less murky rivers of Tolkien’s mines and mythril, both authors left around and therefore tacitly handed down by our father, who mostly worked, but sometimes still read. Everything he finished got stationed next to the can for us to swallow and digest amongst ourselves.

I first tested the dark waters of King on my own, a bit too young for the fast and dirty turbulence of an early short story collection called Night Shift, which left me with a well-stirred mix of sleeplessness and excitement. I back-paddled to some lighter fair with Eyes of the Dragon, its Arthurian overtones feeling less like an alien shore after spending so much time in Middle Earth. I could sense a deeper truth in Mr. King’s voice, something dark and forbidden and real down his well of words. I dove into my first thousand-page-plus verifiable King tome: IT. I was twelve.

IT was a revelation. “What can be done when you’re eleven can often never be done again,” King writes. Here was a book not only starring a bunch of kids, but a bunch of weird kids who swore and were all messed up, not unlike a certain brood of young people I shared a lavatory with — and King treated them with respect. Sure the horror was there, but at its core, between inhaler puffs and an evil shape-shifting clown/blood-sink, there was a look at kids as real people. These kids were scared and screwed up, and they had to face the consequences of what had happened to them when they became scared and screwed up adults. The effect was like someone had thrown back the filthy curtain on the sitcom of adulthood. The strange nightmare that is life and living it is everyone’s. I thirsted for more.

I crawled through the sewers of IT and dove into the sprawl of The Stand, and my elder brothers nodded in approval as I walked towards the apocalypse — and further away from them. The Stand is a story that just doesn’t let you go, an epic on another scale, as if someone took Middle Earth and churned it into Middle America (while murdering nearly everyone there). Every character and turn of the sprawling story held me, the detail and scope unlike anything I’d ever imagined; I couldn’t turn its pages fast enough. I can still see the rag-tag bunch of heroes roll up to the big bad Flagg in Vegas, I can still hear Geddy Lee on my stereo wailing prophecies by their side. Like a dusty forgotten snow-globe, King had taken the old story of good versus evil, shaken it up, and thrown it out the window — but it landed intact, renewed, and in the form of a big beautiful book unlike anything I’d ever swallowed. I made it through the End of Days and felt cleansed, as if still more of human nature was laid bare before my impressionable eyes and mind. “Who gets to be best-liked in any community? Who is the most trusted? Why, the man who does the dirty job, of course, and does it with a smile. The man who does the job you couldn’t bring yourself to do,” King writes. Good would always fight evil, but everyone in the fight is filthy too. I’d crossed another bridge, jumped off, and emerged covered in grit and ready to walk down my own long road.

So I sprinted. I took in all that I could with varying swaths of consistency and quality, from evil zombie cats of Pet Cemetery to the bizarre bazaar of Needful Things. I drank up everything I could get my hands on between 1990 and 1996, always guided by King’s unwavering compass, which always sought truth between the freakish dark cracks and crevices beneath us.

Then I found Roland, ‘The Gunslinger.’ Stephen King’s self-proclaimed Magnum Opus, it sets forth as another tale of good versus evil, and distant echoes of Middle Earth reside here too. The Gunslinger chases a man in black towards a Dark Tower in a muddy reflection our own world. Another strange kid comes into the mix, a kid who is written to be real and honest and true, a kid from our world who stands in the face of danger and falls, and the Gunslinger pulls him along kicking, just like King pulled me, some tenderness beneath all that brutality (but certainly no mind paid to the fact that neither of us was old enough to drive). Then the whole thing goes beautifully bonkers with some mystical doors on a beach in The Drawing of the Three. As King delved deeper into the Dark Tower mythology, I plunged with him and came gasping to the surface to glimpse all of his stories turning on one point, one Tower. The scope of his ambition extended beyond genre and plot and into the wave of the power of story itself to transform and transcend. He showed me that there were so many other worlds than this one, and that they all mattered. I wanted to go shape my own.

And then he stopped. So I stopped, too. The Wastelands, the third of his tremendous Dark Tower series would be his last in the tale of Roland for six years. When you’re eighteen or so, that’s quite a few years. By the time I read it, The Wastelands already had a few years on it, and it looked like there was no end to Roland’s journey in sight (and that strange tale ends on a real train-ride of a cliff-hanger, let me tell you). All of which coincided with my exit from my childhood home, hometown, and life. By the time I went to college in the Big City, I’d managed to convince myself that I floated above the pulp and foolishness of certain childhood stories and pastimes. A lot less energy was spent listening to Rush, playing video games, and reading Stephen King. “Go, then. There are other worlds than these,” said Jake, the child-friend of The Gunslinger. I would come back around to King’s world, just like I would come back to Rush and video games. I just needed to swim around on my own for a bit.

Years rolled by, and my Very Adult Perspective washed away as the days and nights churned forward. I became an artist, and loved every minute of it, but somehow so much of my work was wordy and covered with the echoes of stories. Each little piece of art I forged began to whisper weird words in my ear. My mind had been shaped for something more than just pictures and their sprawling implications. And then Stephen King got hit by a car.

He was okay enough, or as okay as you can be when you get whacked by a giant hunk of metal, but by all accounts, it woke him up a bit. Not that he hadn’t been writing in the meantime, but he knew he needed to finish Roland’s tale, and while he was at it, he’d finish up another little book about the craft itself, On Writing.

I found him again shortly thereafter, and he splashed me awake, too. On Writing was its own revelation. “Words create sentences; sentences create paragraphs; sometimes paragraphs quicken and begin to breathe,” he writes. All my young life of reading King, one of my favorite parts of his books were his warm introductions — his wandering set-ups for where he was at and where he was headed while he made this particular book or that particular set of stories. While I relished each strange tale, I also treasured these unadorned and easy-going asides. Here was a book all in Uncle Stevie’s unvarnished voice, all about the craft that he’d mastered. In it, he told me a lot, but more than anything else, he told me what I already knew — that I had to do one thing in order to tell the stories I wanted to. “Amateurs sit and wait for inspiration, the rest of us just get up and go to work,” Steve says. I had to actually write, dammit.

My siblings and I have all grown up now, and thankfully survived our own long crucibles, bridges, and countless pulp novels more or less intact. While our worlds and journeys are quite different, we still connect over stories, and most of all, the stories of Stephen King. I was late to the pool party coming back around to King’s magic words, but now it’s a joy to return, like seeing an old friend who you thought you’d sailed away from. He was there in the water all along.

So I do what Steve said. I put words on the page, one at a time (and I mind the adverbs, by the by). Stephen King molded my mind when I was young enough not to realize it, and then he convinced me to give it a try myself, and no amount of words I put down will ever be thanks enough.

It turns out that throughout all of it, I learned, at least a bit. King’s twisted claws sculpted my mind to believe that any idea I could have, if I could see it, if I could dig it up and dust it off properly, I could bring it to the surface. And now I write my own weird tales, I put word after word to page after page to set sail into my own stories. One of these days I might even make one that’s worthy of a spot next to someone else’s toilet.

TIFF 2019: ‘Nobadi’ Turns the Oddball Couple Genre on Its Head 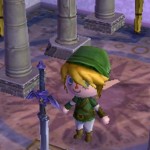 Marty Allen is an artist, writer, and creative producer who lives in Brooklyn. Marty loves to write about video games, pop culture, and all sorts of things. He's written a pile of books and made a bunch of art and songs, but mostly he just plays Animal Crossing, walks his dog, and makes delicious sandwiches.