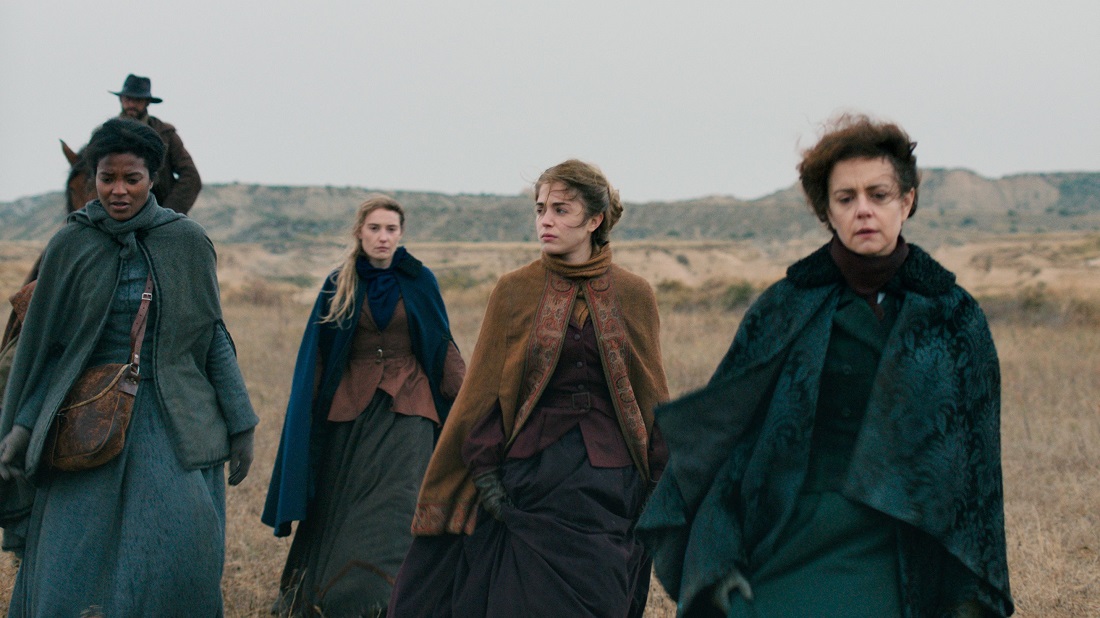 David Perrault’s Savage State should be a great addition to modern Western canon. A sprawling, slow-burn adventure, the film follows a family of wealthy French settlers on an arduous journey to escape the chaos of the American Civil War. Against the backdrop of the desolate midwestern wilds and spurred on by the tense circumstances of their flight, the family’s unspoken tensions soon begin to break the surface, old wounds reopening under the harsh sunlight. All the ingredients are there, waiting to coalesce into something greater than the sum of its parts. And yet, that never quite happens. Despite some strong individual elements, the film never quite gels, and as a result, often feels flat and unremarkable.

First, the good. The film is quite often gorgeous to look at, with early scenes in particular sumptuously lit by the amber light candles and fireplaces. The imagery is often striking, making full use of the magnificent desolation of the setting in a way that eschews the grandeur and myth-making of classical westerns, but also the grit and grime of more revisionist fare. Full marks should go to cinematographer Christophe Duchange, who emerges as the film’s clear MVP.

But then there’s…well, everything else. In terms of script, Savage State has an interesting hook, and plenty of fertile ground that could be used to explore themes including but not limited to racism, the bonds of family, the myth of the romantic western hero and American colonialism. But the film remains maddeningly shallow throughout, rarely functioning as more than a self-actualization narrative for our lead, youngest daughter Esther. Esther, her family, and their hard-bitten escort Victor (who also emerges as Ether’s love interest) rarely feel like much more than stock characters. Esther is the melancholy thinker of the family, sister Madeleine the frail, sick one, and other sister Justine admits outright to feeling that she has no identity outside of caring for Madeleine. Victor, meanwhile, is the hard-edged cowboy we’ve all seen numerous times before, gruff and grim, living in fear of the day when the encroaching railroad renders him obsolete.

Things get somewhat interesting with our main villain, a female outlaw named Bettie who seems intent on killing and/or bedding Victor. Of all the cast, Armelle Abibou seems to be giving it the most gusto, playing Bettie as a violent madwoman who does creepy dances and talks to herself. Bettie is also followed around by a gang of nameless enforcers, who warrant mentioning just for how weird and out of place they feel. They never speak, and all spend the entire film wearing burlap sack masks. They hover around menacingly, and later on, take to walking calmly into firefights like they don’t know how bullets work. They feel like the villains of a far more horror-centric movie who wandered onto the wrong set, perhaps a Western spin on The Strangers. They’re one of the more interesting elements of the film, but most of that comes from the fact that we have no idea what their deal is. Mystery, as always, is more intriguing than the rote and expected.

And that’s what the rest of the film is, by and large. It rarely surprises, only really zigging when you expect it to zag once at the very end. It feels mostly dull and lifeless, missing a certain crucial spark to galvanize it into something more. What is that spark, though? A more clever and insightful script? Better chemistry between the cast? A soundtrack that doesn’t recycle the same warbling, amelodic tune for every single dramatic moment? All of the above, maybe? Even that lovely cinematography begins to ring hollow, looking almost too polished and untextured when we switch from the moody lighting of interiors to the flat light of the outdoors.

Savage State is one of those films that doesn’t have anything, in particular, holding it back, no single flaw that cripples the film as a whole. Rather, it’s several smaller flaws and a certain missing something that keeps the film from being much more than simply fine.

Fantasia 2020: Terror and Family Drama in The Block Island Sound

Fantasia Film Festival: ‘Me and Me’ Is a Complete Mess