Our unfortunate protagonist Michael travels across the country to Berlin to visit his ex-girlfriend in hopes to rekindle their relationship. He arrives at her apartment only to be greeted by hordes of zombies and a young maintenance worker named Harper. The two flee to a vacant apartment and barricade themselves within, taking shelter from the flesh eaters running rampant below.

Rammbock is reminiscent of [REC] with its claustrophobic setting but it’s zombies are more akin to the victims in 28 Days Later. It’s fast-moving, vicious, and terrifying but yet somehow (despite a brief 59 minutes), manages to find room for love, loss, loyalty, and betrayal. The picture (too short to be a feature and too long to be considered a short) does offer some interesting subtext, and also opens the rule book for new ideas, but it sadly comes to an abrupt halt just as things become interesting.

The apartment complex is situated Rear Window style, allowing the neighbors to communicate amongst themselves in order to devise ways to escape and help each other survive. The title comes from a scene in the middle of the film where our the two leads build a home-made battering ram–or rammbock–to break through the walls in hopes of escaping through the next apartment. It is one of the many clever and innovative techniques screenwriter Benjamin Hessler and director Marvin Kren conceive of in a sub-genre that is already over saturated with carbon-copy knock-offs of previous work. The introduction of sedatives to calm the victims before the rage virus takes control is also a nice touch serving as the backdrop for several relationship predicaments. 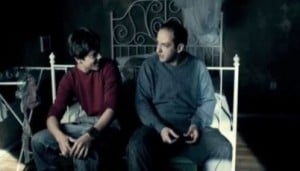 The attacks are both effectively creepy and quite brutal; the makeup is a tad disappointing relying solely on pale skin and white-out contact lenses, but it’s the zombies’ physicality and animalistic shriek that keeps the viewer on edge. Most impressive is the way the filmmakers capitalize on a such a small setting and how in the end they incorporate flash photography as a safeguard from the walking dead. The final chapter is visually stunning with excellent sound design and ranks among one of the best scenes in any horror film released that year.

Short and stripped-down, Rammbock still delivers some brutally effective shocks and gradually conjures a haunting atmosphere of ever-escalating panic and despair. Based on a short film, the idea doesn’t really take a new bite in the genre but shoots ahead so fast you might not notice.