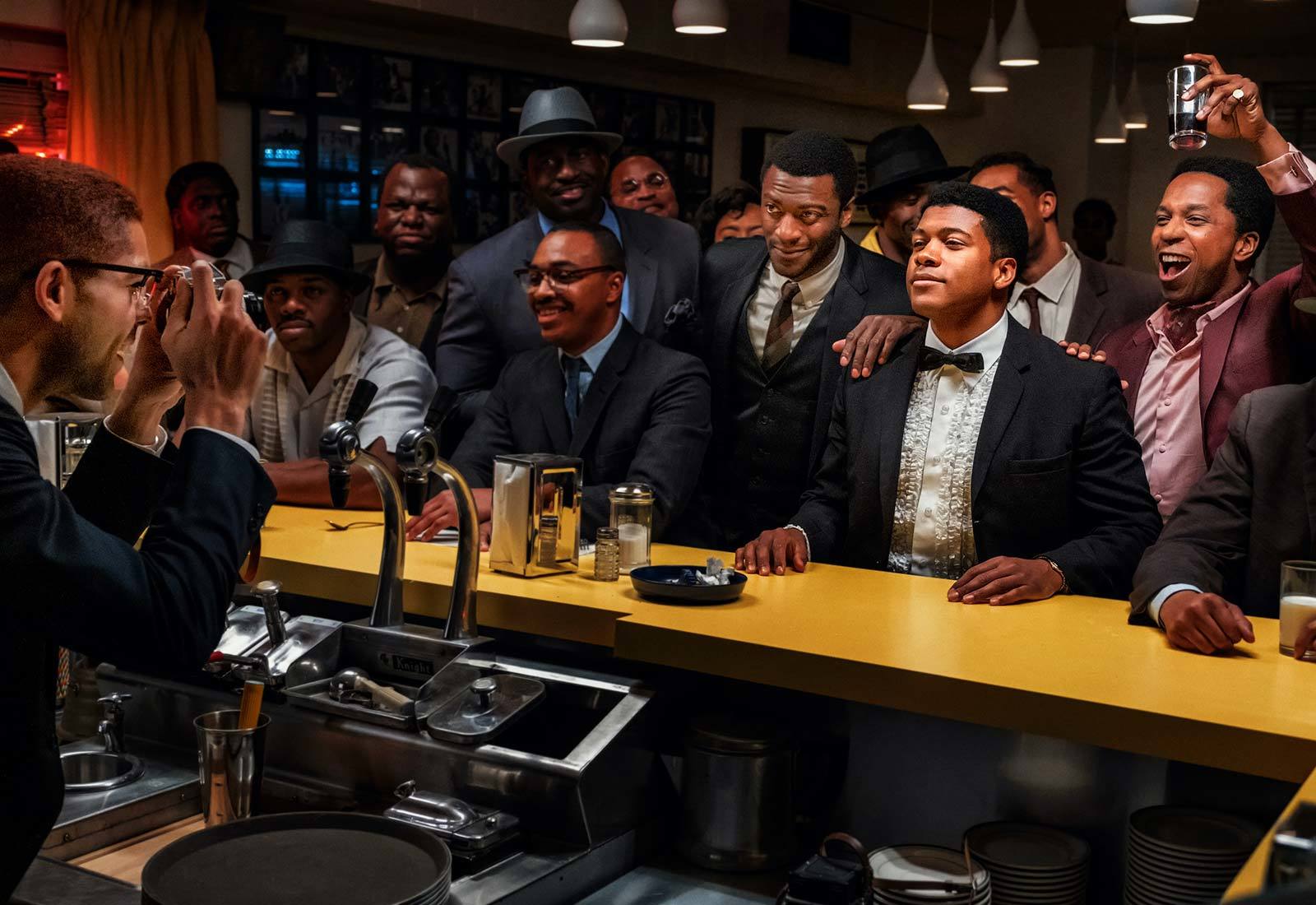 One Night in Miami Review

Set primarily in one motel room over the course of a single night, One Night in Miami emphasizes the struggle for equality and freedom for the Black community in the past – with a keen eye on how the struggle persists in the present. Capturing the individual plights of four prominent African-American figures, Regina King’s feature directorial debut is an expertly crafted look into how the fight for freedom and acceptance cannot be blueprinted. Instead, she shows many paths to the same objective, none of which are easy, but all dependent on finding a platform to speak truth to power and sticking with it.

Adapted from his own play of the same name, Kemp Powers brings to the screen his fictional account of a meeting between real-life friends and notable figures in Black history: Cassius Clay (Eli Goree), Jim Brown (Aldis Hodge), Sam Cooke (Leslie Odom Jr.), and Malcolm X (Kingsley Ben-Adir). One Night in Miami gathers the four together immediately after Clay’s boxing win over Sonny Liston to become the heavyweight champion of the world. Cooped up in Malcolm’s motel room, away from prying eyes, their conversations of partying and celebration quickly lead to a nuanced exploration of what the power of their voices mean in a crusade for freedom.

It’s obvious this was a stage play before being turned into a film. One Night in Miami doesn’t do a lot to distance itself from that fact, but it does flesh out the story in ways that only film can truly capture. These moments are generally brief, but all throughout is a camera that bounces off characters as they have verbal sparring matches, intensifying both arguments and even quieter conversations. All of it in service of heightening the chemistry of the actors – which is where the film shines brightest.

Most will have seen plenty of portrayals of Clay (who would later be known as Muhammed Ali) and Malcolm X, but even each figure’s notoriety doesn’t stop each actor from delivering a performance that is uniquely their own. While actors like Leslie Odom Jr. and Kingley Ben-Adir are the standouts – much of the film’s confrontations and arguments are between them – it’s maybe Aldis Hodge and Eli Goree that really sold the film’s shifts in tone. Goree brings a levity to everything as his character basks in his recent victory, but there’s a way he proceeds with conversations about becoming a Muslim and how he moves around with both nervousness and excitement at the same time.

Meanwhile, Hodge is delivering the most subdued performance in One Night in Miami. Sitting in the background of conversations between characters, his delivery on jokes is especially dry and used sparingly. For a while, there’s a feeling that his character isn’t quite mentally present, instead thinking of his transition from the NFL to Hollywood. His character isn’t particularly prominent in comparison to the four, but he does get one of the strongest opening scenes against Beau Bridges – who plays an endearing friend of Brown’s family, that then quickly sours when Brown realizes his specific brand of racism. Other supporting actors like Michael Imperioli, Lance Reddick and Lawrence Gilliard Jr. all do excellent work here as well.

As enjoyable as the acting is, the real meat of One Night in Miami is the screenplay. The characters each have their own specific concerns going into the motel room and by the end there’s a fully nuanced exploration of how each character can break out of their predicament or use it as a source of strength – whether it’s Cooke trying to use his platform to bring awareness to a wider audience; Malcolm’s concerns over being the face of a movement; Clay trying to find where he can make the most change; or Brown navigating the systemic racism in both the NFL and Hollywood. All of these characters have something deeply personal to work through, but all show that anyone can play a part in making a change if they just try and stick to their beliefs.

One Night in Miami could easily have just been a play brought to screen with no added flourishes and nothing to justify being a film. There would even be a simplicity in that which could emphasize the already obvious importance of the message. Why One Night in Miami is an excellent movie is that it uses the screen as a gateway into a time and place, with characters who jump off the screen because of their chemistry and the performances behind that. Regina King uses her voice and position in Hollywood to take a story about other notable figures in history finding their voices, and amplifies it for all to hear. There’s an inaccessibility to the message when left merely as a play. By adapting it into a film, One Night in Miami’s ideas and thoughtful exploration can find more people to champion the fight for equality.

Editor’s Note: This article was originally published on September 15, 2020, as part of our coverage of the Toronto International Film Festival.

The Marksman Barely Rises Above Expectations