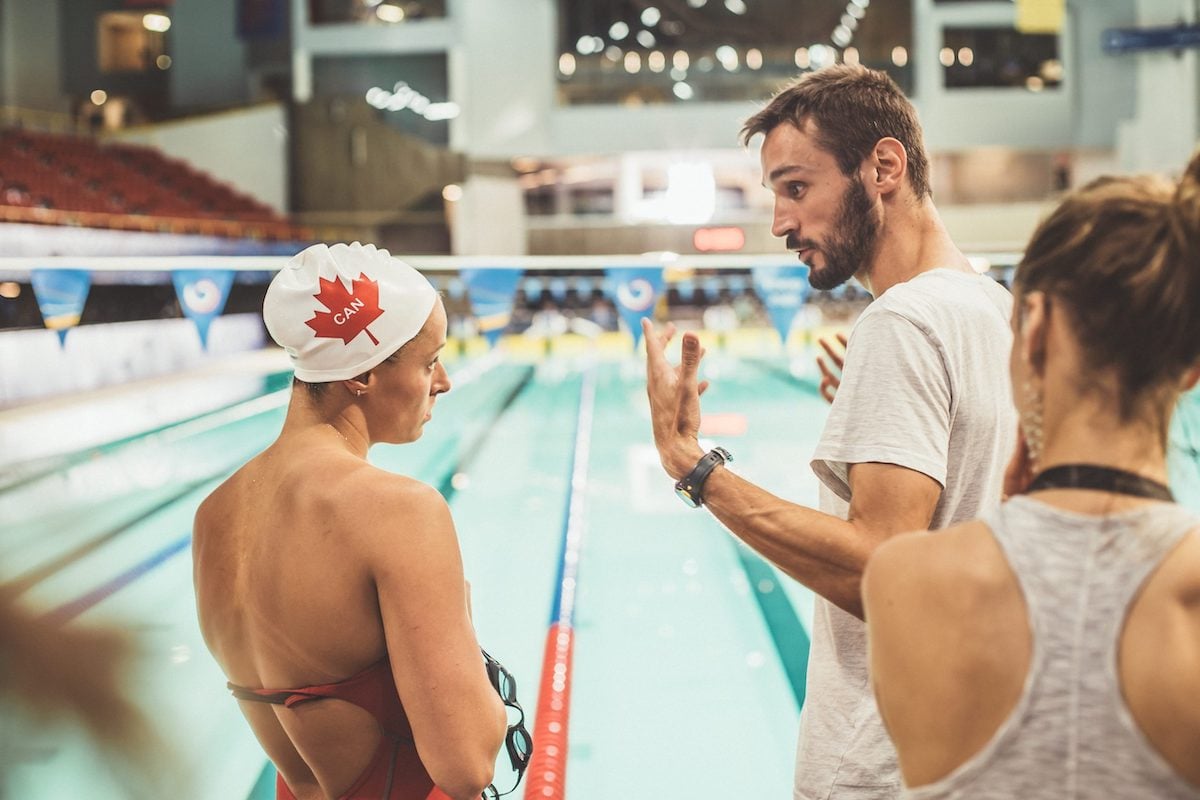 Athletes live a cocooned existence. Shuttled from venue to venue, hotel to hotel, international competition to international competition, their dedication to sporting excellence can often come at the expense of living a real life. Nadia, Butterfly plunges us right in the deep end of this difficult path, opening on a strenuous exercise regime. Gripping opening sequences are caught in a tight 1.50:1 aspect with handheld digital expressively capturing the bright red colours of Canadian team-wear against the deep blue of the swimming pool.

Set during the (in-real-life-cancelled) 2020 Tokyo Olympics, Nadia, Butterfly gives us a glimpse into this fascinating world of competitive sports as well as the pent-up horniness released during the after-parties once the previously abstinent athletes can finally let loose. We follow the twenty-four-year-old Québécoise Nadia (Katerine Savard) in unflinching close-ups as she achieves Olympic success with her relay team. Yet, despite, being relatively young, she has decided that this will be her last ever tournament, worried that she is yet to define herself outside of the world of sports.

The film takes place mostly after this Olympic success, studying Nadia in real-time as she nervously navigates a brave new and excessive world of drinking, partying, drugs and sex; perhaps trying these things for only the first time. Katerine Savard plays Nadia with a refreshingly bristly touch, making her feel more human and relatable in the process. In one tense group scene amongst her fellow swimmers, she brazenly argues that there is more to life than swimming, insulting them all in the process. But she seems to have a point: if all you do in life is swim, what do you know about the world on dry land?

She may be an expert in the Butterfly Stroke, but in real life this papillon — with the French word evoking imprisonment — has yet to take flight, the film empathetically searching alongside her in various nightclubs, gaming halls, and press conferences, conversations freely flowing between English and French. The bilingual nature of the film is not just a natural expression of Canadian culture, but actually a key thematic device, words taking on different meanings depending on which language is being spoken. Interestingly enough, Japanese is barely heard at all, reflecting the hermetic world of the international Olympic village.

While brimming with possibilities in the first half of the movie, the second half takes on a more melancholic, more enigmatic, tone. With shades of Lost in Translation in both the sense of dislocation Tokyo can bring and in the electronic music choices (gazey synth-pop cuts such as Metronomy and Beach House), Nadia, Butterfly is a deeply-felt work of existentialist wandering. Refusing to commit to any definitive conclusions or refusing to tell us exactly what is on Nadia’s mind, it bravely shows its protagonist in a constant state of becoming. While that can be frustrating in some contexts, in Pascal Plante’s assured hands, Nadia, Butterfly is thrillingly, brilliantly alive.

Nadia, Butterfly was picked as part of the Cannes Film Festival 2020. You can read our coverage here!

Spiral is an Unconvincing LGBT take on ‘Get Out’