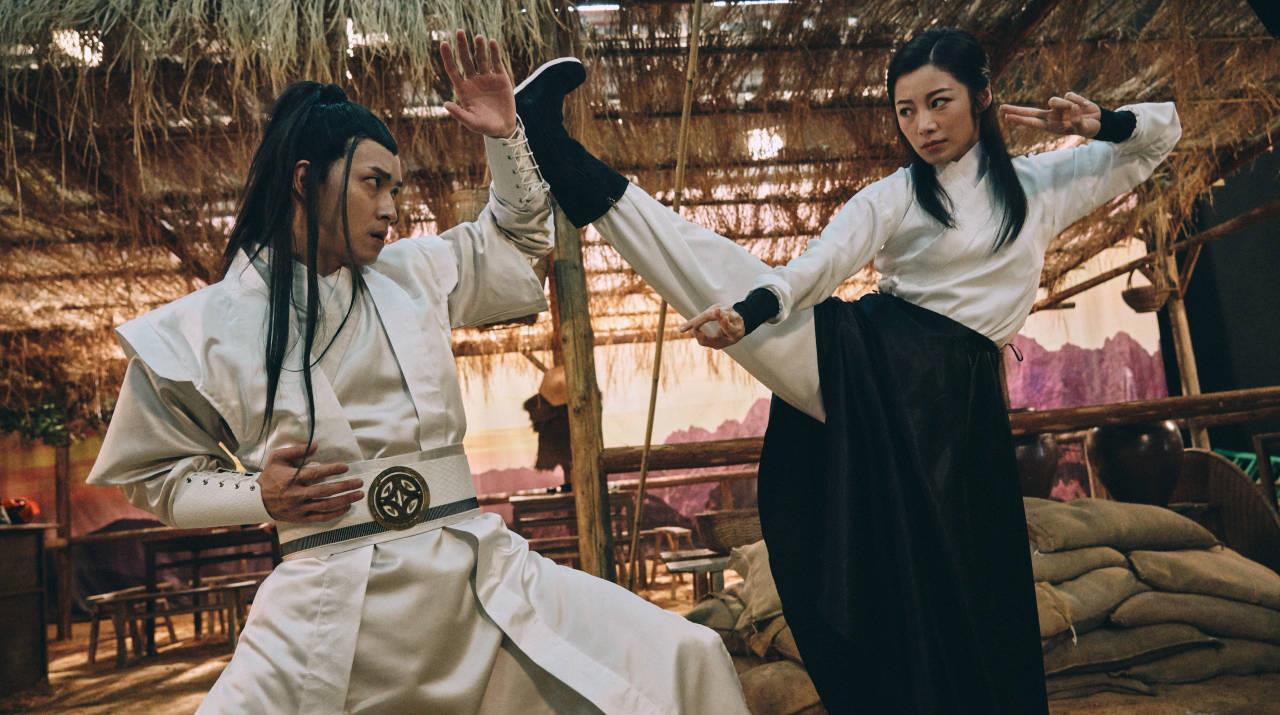 As the central character in Legendary in Action! narrates at the film’s start, a movie may look glamourous in front of the camera, but behind things get down and dirty. Hong Kong filmmakers Justin Cheung and Ho Li’s feature-length debut is another movie about the business of making them. Anyone who observes Hollywood’s output closely and the awards ceremony circuit knows very well that that Tinseltown can’t get enough of films about, well, itself. What of movie industries in other countries and regions? What about smaller projects operating on a shoestring budget? Such is the plight of the characters in this charming if sometimes uneven dramedy.

As a boy, Bill “Tiger” Cheung (director Justin Cheung) loved watching a martial arts serial titled Seven Star Sword, starring a strapping young Master Dragon (Chen Kuan-tai, an actual Shaw Bros. star in his heyday). Now a struggling filmmaker, Bill and his producer friend Andy (Jiro Lee) somehow get a few million to finance a film reboot-sequel of the show. With not much to work with and home life on the cusp of great change with the arrival of a baby, making a new Seven Star Sword is a challenge. As luck would have it, his real-life hero, Master Dragon himself, drops into his life one day while the director is at the hospital with his wife (Harriet Yeung). Why not cast the actual actor in the lead role? Dragon accepts, but filmmaking techniques have changed since his days, as has his health, with amnesia robbing him of his former vitality. He’s a little on the tempestuous side and over-excited to pretend to stab people. Nobody said this was going to be easy.

Since the most recent pandemic struck in 2020, the process of financing and making movies has gone into a headache-inducing tailspin. While things are starting to look up as far as overall box office receipts, that does not mean that every film industry in every country has recovered. Hong Kong has long been known as a vibrant, creative moviemaking hub. There was a time when hundreds of pictures were released annually. Recent reports suggest that both the pandemic and a complicated political relationship with mainland China have Hong Kong cinema licking its wounds. Other issues have lingered since the late 1990s, such as the efficient export of Hollywood products, cable tv, and rising costs.

Without giving away some key moments of Legendary in Action!, Cheung and Li’s story is, in many ways, a call to arms about their homegrown cinema landscape. It’s seen much better days, and one gets a sense that that is something their picture is trying to communicate. To be fair, the movie is not political, at least not explicitly. It predominantly concerns itself with the sort of negotiations and behind-the-scenes drama that characterizes any smaller production, not exclusively those afflicting Hong Kong cinema.

From the outset, the directing duo make their love of older wuxia adventures known. A young Bill is watching an episode of Seven Star Sword on his cathode ray tube. The film even cuts to a full-screen version, complete with visual interferences, as if the audience were watching along with the boy. This charm and moxie are spread throughout the picture, making the overall viewing experience a journey of sorts. As Bill wrestles with the pressures and restrictions pushing against his vision, so too does the audience appreciate the difficulty level involved in getting even a modest project off the ground. They must treat the props carefully because they have only one set. Sets are recycled, miniatures abound, salt and pepper get to play snow and dirt, casting a diner waitress (Wiyona Yeong) in a lead role. All sorts of hijinks serve the movie’s comedic and dramatic ambitions. There is an irony to the fact that Legendary in Action! itself is a relatively small production. Shot mostly with handheld cameras, made by first-time filmmakers, transpiring in many small locations and some modestly designed sets, the meta quality is appreciated.

Just because it’s a small production does not mean it can’t have a big impact. Thanks to an engaging cast, the story’s themes come to fruition. The casting of Chen Kuan-tai is a minor coup and further pads the movie’s overall meta personality. Kuan-tai is a name many martial arts movie buffs cherish a great deal. He starred in Shaw Bros. classics such as Crippled Avengers, Blood Brothers, and Executioners From Shaolin. While Seven Star Sword was never a television show, its fictitious style, as depicted by Cheung and Li, harkens back to the sort of filmmaking Shaw Bros. was known for during the 60s, 70s, and 80s. Having the legendary martial arts actor, who in this movie starred in a make-believe equivalent of a Shaw production, is very neat.

He and the rest of the cast do the best with the parts given to them, although not all parts are created equal. This results in an imbalanced tone. As the personal and professional struggles mount, Legendary in Action! succumbs to extraordinarily high melodrama. While the final few scenes bring the film back to a level of quality and enjoyment that hopefully will have most people leave the theatre with a smile on their face, there is a stretch during which it feels as if the picture may potentially go off the rails. The twists and turns are not especially inventive and don’t gel well with what’s transpired earlier in the picture. Some revelations come out of the blue, robbing the final act of the emotional weightiness it’s vying for.

At the time of this writing, Justin Cheung and Ho Li’s debut does not have distribution, meaning the only way to see it, for now, is as it makes stops along the festival circuit. There is enough quality and joyful energy to make it a winner. One’s mileage with melodrama may vary, and that section, unfortunately, takes the film down a notch. Overall Legendary in Action! is a charming representation of a lot of things. The love of movies, of making them, of keeping the craft alive, the bonds that bring filmmakers together, and lastly, why we the audience can’t get enough of them.

Easter Sunday is a Tired but Charming Family Comedy