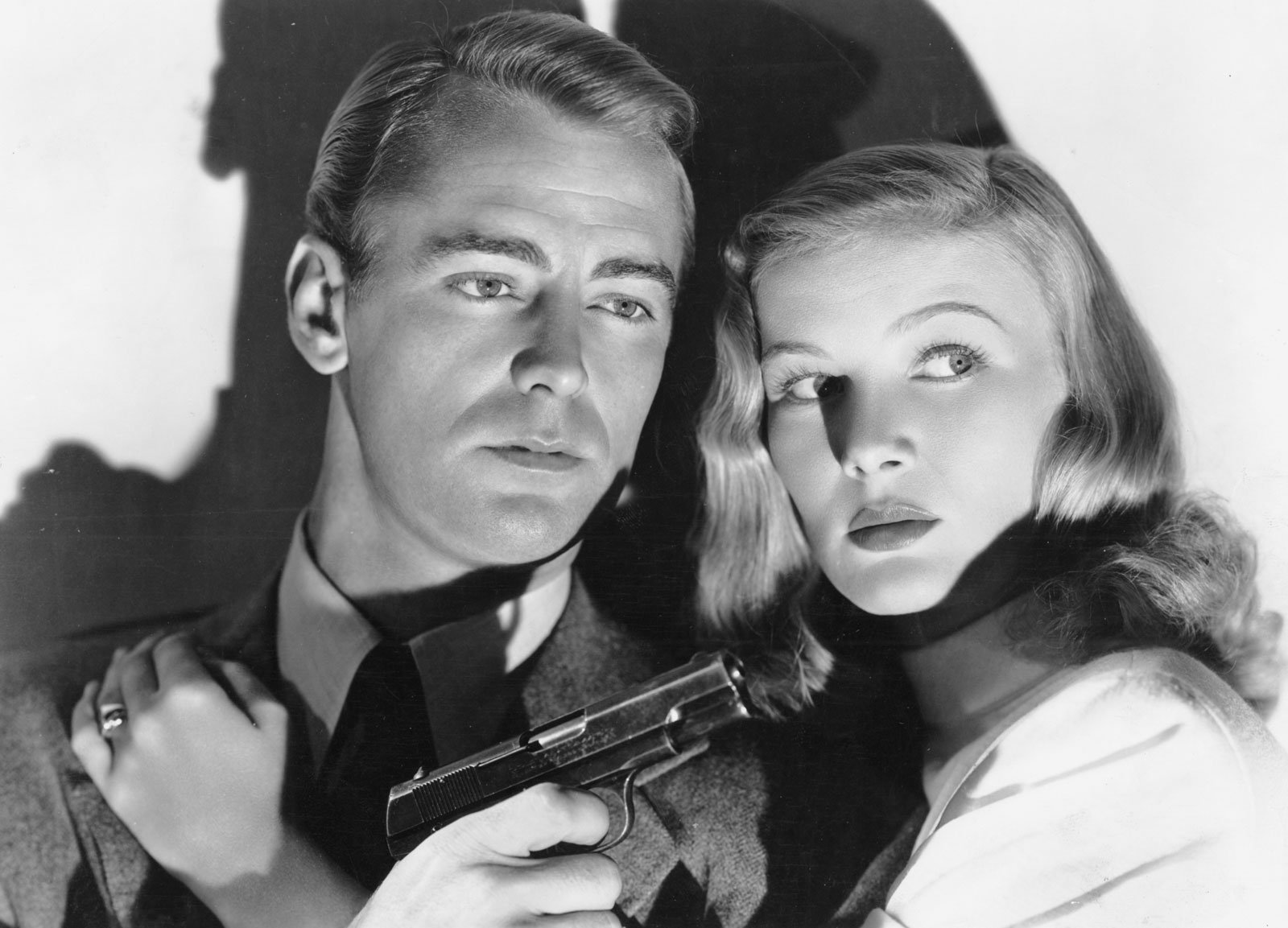 Three wartime veterans who served in the Navy return home to Los Angeles. They are Johnny Morrison (Alan Ladd) and his two faithful companions, Buzz (William Bendix) and George  (Hugh Beaumont). After an early tussle at a diner in which Buzz shows some unfortunate signs of postwar anxiety, Johnny heads home to re-acquaint with his wife Helen (Doris Dowling), who is hosting a party. Much to Johnny’s chagrin, it is clear that one of the guests, Eddie Harwood (Howard Da Silva), owner of a luxurious club downtown called The Blue Dahlia, is having a fling with Helen. The wedded couple does not get along swimmingly, yet the revelation stings Johnny nonetheless. Shortly after Johnny walks out on her and meets a beautiful blonde named Joyce (Veronica Lake), Helen is found shot dead on her couch. Evidence points to Johnny as the culprit, forcing the latter to prove his innocence.

On the one hand, the 1946 mystery thriller The Blue Dahlia came courtesy of director George Marshall, a seasoned, capable, workmanlike force who had operated in the business for approximately 30 years. On the other hand, the film is the creation of writer Raymond Chandler, an instantly recognizable name when it comes to mystery, detective stories, and other such misadventures usually involving hard-boiled protagonists swimming through morally murky waters to uncover some sort of truth, sometimes one that hurts the hero more than it comforts them.

This film is not an adaptation of one of his novels, however. Rather, The Blue Dahlia represents the only time he dabbled into screenwriting, doing so as a favour to producer John Houseman. Chandler reportedly did not claim any sort of monetary compensation for his efforts. That said, his recent attempt at teetotalism proved a hindrance to his creative flow, and he eventually asked for a case of scotch as remuneration (Judith Freeman, The Long Embrace, Random House (2008), pages 228-231). This detail into the film’s production history may seem trivial, but it is interesting to note just under what kind of conditions Chandler had to set himself to produce his typically labyrinthine plots, of which The Blue Dahlia is certainly another example. Sometimes drunkenness can produce genius, other times less so. Dahlia is uncomfortably nestled in the middle of those extremes.

For one, a film can almost assuredly start on the right foot when it sports talents like Alan Ladd and Veronica Lake amongst its leading cast. Ladd is quite good at playing the part of a quietly confident yet wronged veteran seeking justice for a crime that, paradoxically, has liberated him from a dismal marriage even though he’s wrongfully accused as the prime suspect. Ladd is no Bogart (no one is), but in his own way, he can tap into the same toolshed insofar as his ability to hint at a fire burning underneath the cool exterior without ever unleashing entirely. Whilst the film plays out Johnny’s earlier scenes as if he might be the murderer, viewers can clue in rather quickly that the guilty party is someone else entirely. Ladd has an easygoing, affable personality that translates well to this part, as a protagonist who stays levelheaded for the better part of the picture, while being forced to skulk in the dark corners, away from authorities. Lake, no stranger to film noir, is equally up to the task, stuck between a new man in whom she recognizes good, but still chained to Eddie Harwood, to whom she’s married. Lake can bring sass and sweetness to her roles in ways that few of her peers are capable of. She and Ladd share some grin-inducing character development scenes in which chemistry buds. Along with a bit of sex appeal mixed with curiosity and a dash of playfulness, making them an easy and pleasing pair to root for.

Where the film struggles are with the translation of Chandler’s script from page to screen, a script heavy on new characters being introduced, some of whom bring interesting things to the table, others who end up as tepid tools for intrigue and suspense. There are moments in The Blue Dahlia where Marshall and Chandler appear to be on the same page with regard to throwing new, even off-kilter elements at the audience to make the movie as fresh as possible. Buzz, played by Bendix, is a staunch ally of Johnny’s yet unforgivably abrasive to all those he mistrusts, which is pretty much everybody. He is loud and quite obnoxious, although the film clearly establishes that he suffers some light form of postwar psychological disorder. Does that forgive his behavior? Some of it is innate (him repeatedly describing jazz as “monkey music” is…a little discomforting for modern viewers), but he does earn a modicum of empathy. Other cases, like Eddie Harwood, fall flat and are completely uninteresting. Howard Da Silva is a fine enough actor, but he fails to bring any sort of menace to this primary antagonist. Is the problem the actor, the director, or the script? In all likelihood, it’s a nasty little cocktail comprised of all three.

The Blue Dahlia is juggling too many characters and motivations for each and all to carry the same impact. Johnny, Joyce, Helen, Eddie, Buzz, George, several detectives trying to crack the case, a private detective (Will Wright) whose employment under Eddie causes suspicion, multiple goons who show up at one point or another to thwart Johnny in some peculiar ways at times…it is a bit difficult to care about all of these people, some of whom are very flatly written. One suspects this may be the product of Chandler practicing screenwriting for the first time. There is no possibility of luxuriating inside the minds of characters or providing pivotal details through descriptive prose. It must all be dialogue- and scene-driven; maybe Chandler was not entirely up to the task, not to mention the aforementioned face-palm-inducing story about him needing to liquor up for the creative juices to start flowing. Marshall’s direction offers slickness with respect to certain fadeaways and frame compositions, but the script brings the endeavour down a notch. In the end, the film is not bad, just too unwieldy.

Chandler fans will want to check this one out at least to see how his lone screenplay turned out. The man was obviously a very creative talent and George Marshall was a recognized, dependable, and flexible director. It is not as if The Blue Dahlia was a meeting of two minds of dubious creative talent. Unfortunately, those two voices never coalesce to bring something as compelling as some Chandler adaptations (Murder, My Sweet comes to mind). Tellingly, Chandler never wrote another screenplay, even though The Blue Dahlia did earn him an Oscar nomination.