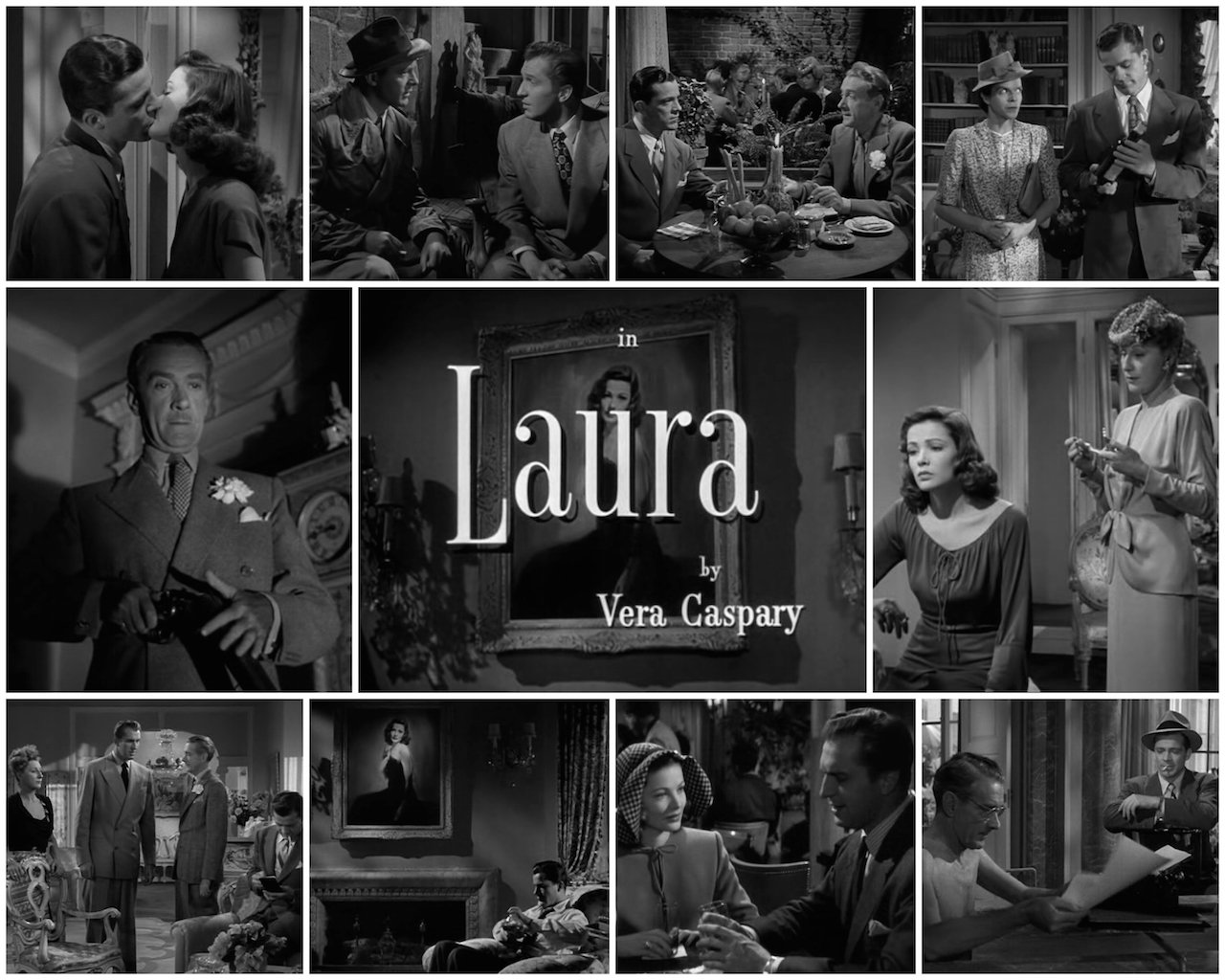 A detective’s work is challenging enough already without the complications that arise when he or she is involved with one of the suspects of a crime. Determining the innocence or guilt of an individual or party would be a lot simpler were it not for the mind games suspects so often play with investigators, evading conviction with lies and half-truths. The sudden emotional attachment to one of the targets of police suspicion could send everything into a tailspin, provided the assigned investigator is capable of keeping a lid on his or her emotions. However, what if a detective grew attached to a person he could not physically relate to, such as the victim of a murder? What if, after believing the object of one’s desire was unattainable, a new reality suddenly set itself in which made the impossible possible?

Laura, directed by Otto Preminger, starts with a newspaper columnist, the unforgivably snarky Waldo (Clifton Webb), explaining to the viewer the circumstances under which detective Markk McPherson (Dana Andrews) arrived at his lush Manhattan condo: the shocking murder of his beautiful protégé Laura (Gene Tierny), shot in the face with a pistol filled with buckshot. From there the film follows Mark as he jumps down the rabbit hole of excuses, evasive answers, and the like provided by Waldo, Shelby (Vincent Price), another man vying for Laura’s heart, her housemaid Bessie (Dorothy Adams), and her aunt Ann (Judith Anderson), also a rival for Shelby’s affections. More than anything, it is the portrait of Laura herself that hangs above the fireplace in her living room that fascinates Mark the most. Everyone’s description of her makes the victim seem quite the extraordinary woman, and judging by the painting, she was especially alluring. One cannot fall for a painting, however…

Laura is much ado about love, much of it quite evil in fact…

It might feel somewhat odd to include this Preminger effort in the noir category. On the whole, the movie masquerades as a romance story stuck in a murder mystery. It is indeed both of those things, unmistakably so even. That said, noir has a funny way of continuously shape-shifting itself to conform with other genre staples. Sometimes one stumbles onto a noir without even knowing it, the familiar traits seeping their way into the fabric of a picture like black ink sinks into a white dress. Romance, in the case of Laura, enables the picture to take on an altogether different identity than originally anticipated, playing into the hands of noir’s more gloomy aspects. Whereas by and large antagonists make their presence known quite clearly in films of this nature, here the villains are, in many ways, decent folk at their core, compelled to act out against their better instincts for love’s sake. There is no big cash prize to snatch after knocking off rivals, no criminal dynasty to control, no great escape from gangsters to perform. Nay, everything almost every character does in this film is out of some form of love for the titular victim. Director Preminger, working with a script ripe with potential, exquisitely plays on this idea of love perverting people’s behaviours. Laura herself is provided some scenes via flashbacks to flesh her out somewhat, yet she represents more a symbol of love in the early stage of the film than a three-dimensional person. She is what corrupts those around her but only despite herself. Laura is a perfectly good person by and large (she is also by far a more engaging personality than Waldo) and to think that the picture is sexist in any overt way because of her role as a concept, so to speak, is off the mark. People do silly, regrettable, and even awful things to obtain and retain love, something money cannot buy. The mistakes and lies the suspects engage in are not the results of who she is in the traditional sense, but because of what they think they can get from her.

As was the case with the film reviewed two weeks ago (The Chase), there is not much else that can be written without revealing the film’s big secret. In a dreamy scene about 40 minutes into the film, detective McPherson, at this stage clearly in love with the victim and having decided to stay the night in Laura’s Laura’s condo, takes a few stiff drinks before slumping into a chair in the living room. Moments later, whom other but Laura herself walks in. She had gone away for the weekend and a classic case of mistaken identity has led to the death of another person!

In what is perhaps the director Preminger’s most interesting coup, Laura‘s narrative does not make a dramatic shift after this startling revelation. Suspects continue to either tell lies or the truth depending on what will have them gain the upper hand over McPherson’s sharp skills as he tries to unravel the new identity of the victim and the killer. The only major added level of tension is that the detective has fallen for Laura, placing him in the most awkward position possible. Yet another curious aspect to this portion of the film is the relative ease with which the love between Mark and Laura blossoms. The lack of time to fully develop their relationship, not to mention that their bond only adds to the two romances already boiling feverishly, partially explains this. That is but one way to interpret the situation, however. Another, more thematically rich understanding is that Laura and Mark are falling prone to the same mistakes witnessed up until then. Just as Waldo and Shelby craved for Laura, the latter who sought after her like a true playboy with only limited knowledge of who she was, so is Mark. It is a little bit of history repeating in a perverse way. To make matters even more interesting, knowing how Laura has behaved in the past, there is no guarantee that she and Mark will live happily together. She had quickly responded to Waldo’s advances once he began to promote her career in advertising and was easily swayed by Shelby once he began to woo her. This is not to argue that Laura is a tramp or anything along those lines, only that her idea of what sort of man would best suit her as a companion is not well defined as of yet. A possible case in point is the movie’s final shot, a broken clock that was a gift to Laura from Waldo, obviously a symbol of their no longer existent relationship. The viewer is not even given the satisfaction of a shot with Mark and Laura in a loving embrace.

On the topic of Mark and Laura, Dana Andres and Gene Tierny are extremely captivating in their respective roles. Tierny carries the heaviest responsibilities as the center of attention. She has to convey the attraction, sweetness, and confidence for which Waldo, Shelby, and Mark think so highly of her for and she is aces in all three respects. Stevens is convincing as the no-nonsense, tough as nails detective who asks the hard questions, even when the suspects take offense to his lines of inquiry, yet it is in the brief, subtler moments when he lets his police detective guard down that the viewer recognizes a softer, emotionally driven person behind the stern mask. Such moments stand out much more than those emphasizing the hard-edged persona. The same comments are applicable to Clifton Webb, whose performance is showy for the most part, in an amusing way, but really shines when his recollections of Laura reveal his genuine affections for her. As self-aggrandizing and antagonistic as he can be, there definitely exists a beating heart somewhere inside. His own relationship with Laura was complex, never reaching the level of true love, if only because the latter never reciprocated. That lack of fulfillment goes a long way in explaining the sense of loss. There is so much great acting on display that the iconic Vincent Price comes off as rather ordinary by comparison. Seeing him a meeker character than usual is a bit strange, especially considering his gigantic figure. Price is fine, although the panache and charisma he is mostly known for are missing.

Laura has built itself a tremendous reputation throughout the years and it is easy enough to understand why. Under Otto Preminger’s guidance, the film has more than enough to satisfy many pallets, from a unique romance story to a depiction of the desperation of men when love is at stake.

The Chase is a Unique Film Noir that Few Have Seen

Ida Lupino’s ‘The Hitch-Hiker’ is as Simple as they Come, but Damn is it Good