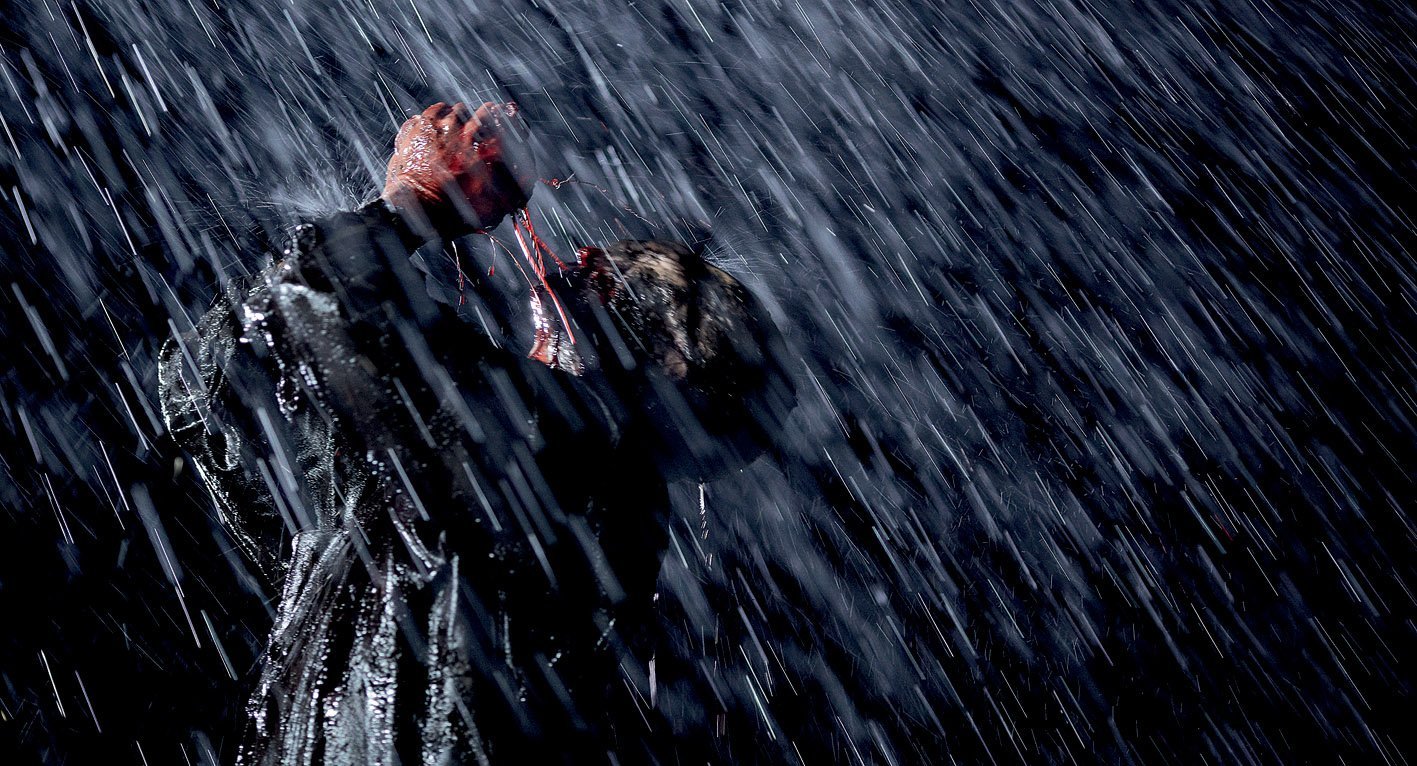 Revisiting Franck Richard’s La Meute (The Pack) is the gore-laden creature feature that garnered much press after its outdoor screening at Cannes was cancelled due to its graphic onscreen violence.

While Hollywood was busy on gutless remakes of classic fright flicks and Japan continued to be buried in carbon copy knock offs of an already over-saturated market of spooky children’s films, a generation of filmmakers re-invigorating the horror genre cropped up in France around 2010.

The aesthetic of violence which emerged from these French filmmakers ironically accomplished what most American auteurs failed to do – which is recapture the grit and danger of American and Italian horror of the 1970′s. Unfortunately, the French offering La Meute is not one of them, but it still comes recommend and best described as a mediocre episode of Masters Of Horror.

Émilie Dequenne stars as Charlotte a young woman who while driving along dark country roads, picks up a hitchhiker (Benjamin Biolay). After escaping a tangle with a bunch of barbaric bikers, the pair stop off at a remote truck-stop run by a sturdy country woman Madame Spack (Yolande Moreau). The break doesn’t afford Charlotte much rest when only after only a few minutes Max goes missing and Charlotte finds herself bound and caged. Now a prisoner of La Spack, who sees her as the next meal for her brood (a pack of monstrous cannibal ghouls), Charlotte must find a way to escape her captivity.

In comparison to other French New Wave Horror, first time director Franck Richard doesn’t necessarily up the ante in terms of bloodletting, but he does bring a fresh kineticism and a sense of obscenity to the acts of brutality in his film. La Meute feels like the aspiring kid sister to Fabrice Du Welz’ Calvaire (The Ordeal), another backwoods horror film drenched in a dark brooding tone. Unlike Calvaire, La Meute can’t pass itself off as an art-house horror about the nature of love among the cannibals, but it does have a sick motherly love to its depiction of flesh-eating creatures. Madame Spack highlights the film with her need to feed. Rarely do we ever see a women of her brawn, sawed off shotgun in hand, take out a vigilante group of bikers while finding ways to feed her now undead children.

The problem with the La Meute is the lack of character development with respect to its protagonist. The film lacks existential weight and emotion amidst the proceedings and the constant tonal shift seems schizophrenic at times. Richard seems unsure as to whether he wanted to make a Rami-inspired blood fest or something more spine-chilling. The film suffers mostly from its script, both over-familiar and burdened with serious story inconsistencies and it ends up tripping over its own hobbled feet. By the time it reaches its final act, La Meute feels like a glossy rehash of the backwoods sub-genre that’s far less interesting than the classics upon which it is modeled.

Still, there is a lot of love of the craft that went into making this film. The creatures are very much present and the film boasts a handful of impressive gore set pieces particularly in its most memorable scene involving Charlotte being strung upside down. ready to be fed to cannibal mutant men arising from the muddy ground below. The tone is aggressive, the sound design effective and the crew makes good on the art direction. Cinematographer Laurent Barès (who previously shot Frontiers and Inside) does well with the barren and ominous settings, and lenses a grim yet beautiful picture.

La Meute doesn’t reinvent the backwoods-freak show formula, and although it is short of big jumps and signature moments, it does have something undeniably entertaining about it. Running at a brief 70-minutes, La Meute still warrants a viewing for fans of this ever-growing wave of cinema.

Nightstream is the Virtual Film Festival, You Don’t Want to Miss