Connect with us
'Felt', the latest film from Jason Banker, is a clever look at relations between the sexes and a wake-up call to the world.

A rape-revenge fantasy with a mumble core aesthetic, Felt is a provocative and deeply necessary look at gender relations. Turning trauma into art, it cleverly flips the script while asking core questions about power in modern society. Inquisitive and acutely written, it delicately paints a naturalist portrait of a world in need of radical change.

Our protagonist, Amy (Amy Everson), isn’t doing well. Suffering from sexual trauma and constant aggression from men — both micro and macro — she turns to the art-world, creating her own bizarro versions of the male form. She even creates herself a costume replete with a prosthetic penis and facial hair, which she puts on to feel like she is finally in control. Still, when she tells a male engineer that she is an artist, he immediately asks her how she is benefiting society. He’s not the kind of guy to get this movie. The resultant dream-like narrative proves him wrong about the use of art in society, its slacker superhero origin story functioning as a wake-up call to a broken world. 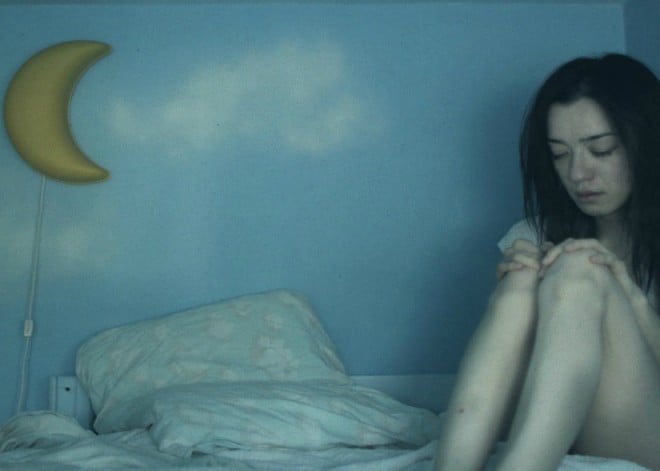 Felt won’t be a film for everyone. When men get bitterly upset about women in Star Wars or (*checks the news*) a new shaving advert, a film like Felt will always be met with a lot of resistance. This is a shame, because it’s only really asking men to imagine what it’s like to live as a woman. It asks you to listen — not to judge Amy’s bizarre actions (at least not at first) — and to imagine what its like to always have the fear of violence lingering in the back of your mind.

Perhaps better than any indie film I’ve seen recently, Felt acutely articulates how ‘rape culture’ — such as making misogynist jokes and inferences — can itself lead to actual acts of sexual violence. It starts with some playful banter, then a defense of bad behaviour, before closely transitioning into real physical threats. By grounding these relationships in real and recognisable situations, it makes Amy’s later transition feel earned. This isn’t glib, clap-yourself-on-the-back, badass-action revenge, but something that Amy feels is necessary in order to beat her past trauma. Likewise, the story doesn’t flash back to one moment that changed it all, but subtly depicts seemingly playful dates that can turn awry any second. It’s not that all men are rapists, but that the spectre of sexual violence can manifest itself at any moment. That’s the real horror.

There is gratuitous, at times shocking, violence reminiscent of Larry Clark, though it’s not there merely to provoke, but to stimulate dialogue. Who has power in the world, and who has the ability to wield that power? In many ways, it reminded me of Kids, which also used its shocks to expose a world off its moral axis. My only criticism is how literal the dialogue can be. While they may have an important moral and didactic aspect, they foreshadow later events so obviously it robs the film of any suspense. Therefore, unlike Kids, these events don’t leave one as breathless as they should. While the film is intimately and tenderly shot by Jason Banker, without that rush of emotion, its eventual thesis point is more academic than experiential. These things should be felt, not just learned, if there’s going to be any real change.

‘Alita: Battle Angel‘ Avoids the Uncanny Valley to be a Technological Marvel