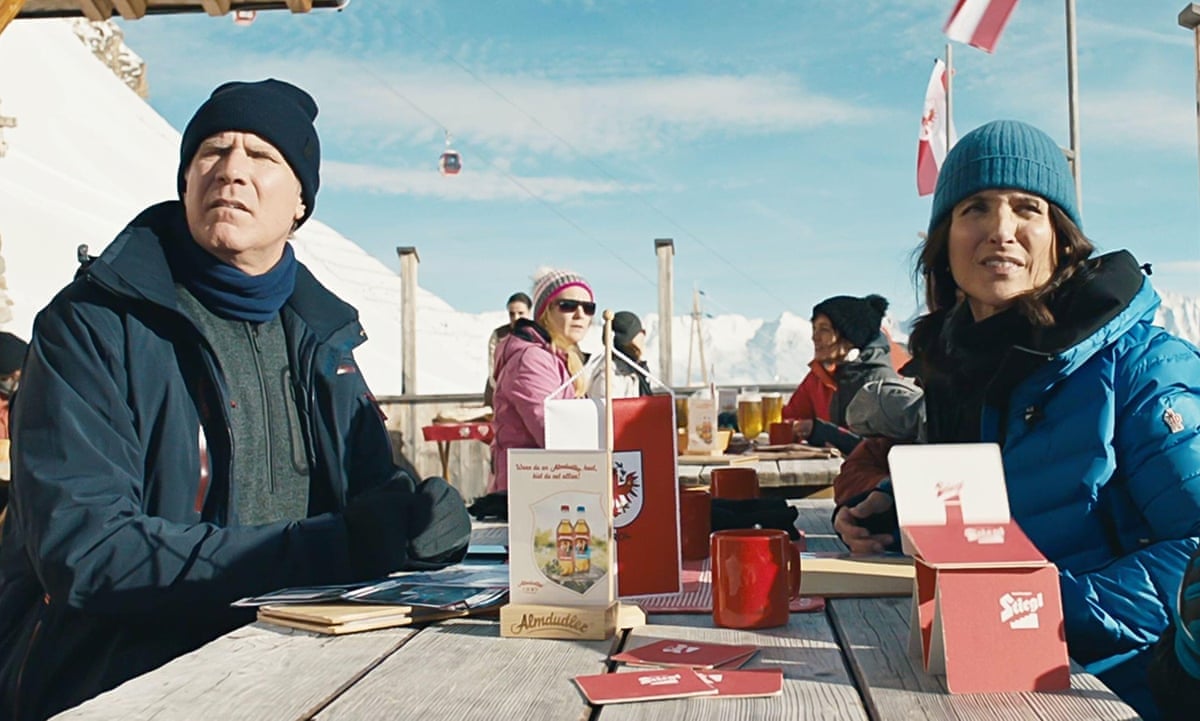 We all like to think we’d do the right thing in a moment of danger and look after others before thinking of our own wellbeing. Or at least we hope that’s the case. In Downhill, the new dramedy from writer–directors Nat Faxon and Jim Rash, one husband is put to that test, to alternately hilarious and dispiriting results.

Downhill opens on Pete (Will Ferrell) and Billie (Julia Louis-Dreyfus) as they check into a swanky resort in the Austrian Alps for an expensive skiing trip with their two young sons. But the idyllic vacation turns sour shortly after they hit the slopes when the family stops for some lunch at a balcony cafe overlooking the slopes. While they’re waiting to order, a gunshot-like boom is heard in the distance, a controlled avalanche that’s periodically set off to prevent skiers from being overrun by the real thing. But Pete and Billie somehow managed to miss the copious signs warning about the avalanche, and they start to worry as a monstrous cloud of powder swells and moves closer and closer to them. A full-blown panic erupts on the deck as tourists begin to run away, knocking others out of the way. Billie and the kids are pinned against a wall by their table, but Pete’s free to move, so he grabs his cell phone and runs away as the avalanche engulfs them.

Except that’s it’s nowhere near as dire as anyone thinks; the avalanche was little more than vapor and fog, and as soon as it clears the stragglers are revealed to be unharmed. But that doesn’t change the overwhelming fear of a lonely death that overcame Billie and the children just before the avalanche reached them. To make matters worse, Pete tries to act nonchalant as he slinks back to their table. The two try to pick up where they left off for the sake of the kids, but Billie’s overcome by fury and sorrow at the thought that her husband would abandon her in a moment of danger and crisis. Even worse, he went for his phone, which he’s seemingly addicted to, rather than his family.

Downhill’s synopsis would be perfect for a dark drama, but the film is lifted up by some necessary comedy, most of it supplied by Ferrell and Louis-Dreyfus, along with hilarious supporting work from Miranda Otto as a hedonistic maître d’ and Zach Woods as Pete’s work colleague, who’s also vacationing in Austria. Faxon and Rash, along with their co-writer Jesse Armstrong, adapted Downhill from 2014’s Force Majeure, written and directed by Ruben Östlund. Östlund’s movie is the superior work by far, and he elegantly toes the line between comedy and drama as his couple reassess their relationship in the wake of their recent trauma. Faxon and Rash aren’t in his league, but they still crafted a relatively subtle film out of Pete and Billie’s newly discovered recriminations. Both Ferrell and Louis-Dreyfus are masters of comedy, and they display those chops often enough, but the film also gives them a rare chance to turn down their personas. So much of Louis-Dreyfus’ comedy has more to do with her impeccable timing, and here she’s able to transform lines that would be completely flat on the page. Ferrell has more of a reputation for broad comedy à la Saturday Night Live, but he’s fascinating to watch when he’s working in a quiet register.

Downhill sometimes stumbles when it relies on hammy tropes about kooky Europeans, and it could stand to be more uproarious in its most comedic moments and more downbeat when depicting Pete and Billie’s moments of doubt. It finds subtle ways to distinguish itself from Force Majeure, though the choice to jettison the original film’s ending is a mistake. But the original movie was one of the best films of the past decade, and even a shallow copy of it still manages to find compelling ways to examine a marriage on the edge.

Stepping Over the Line: Across 110th Street