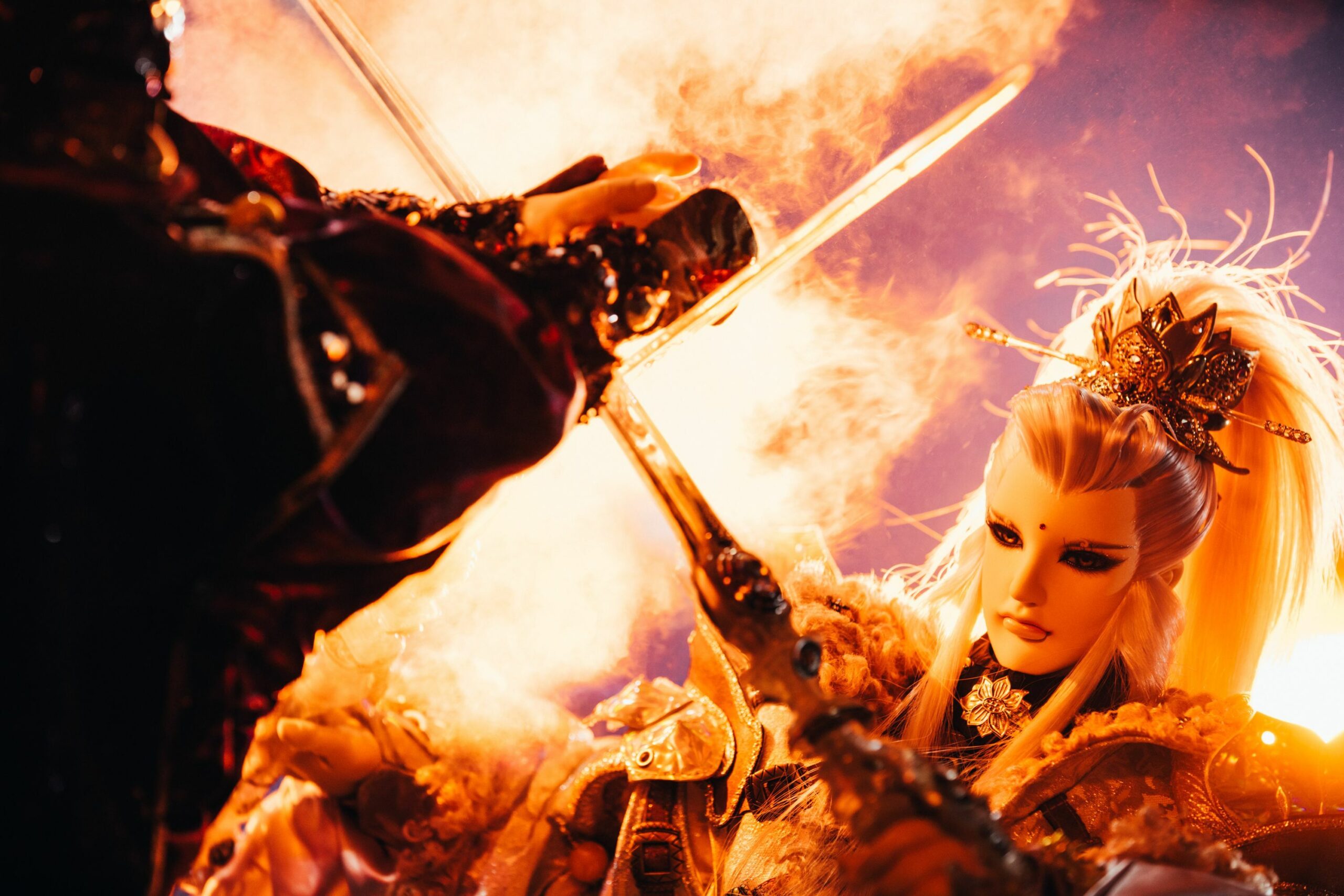 One of the many pleasures of attending the Fantasia Film Festival is watching something that adheres to the old saying: “And now for something completely different!”. “Budaixi” is the Chinese word to describe traditional hand puppet theatre. The art form was born in the 17th century and has carried over to varying degrees to this day. Interestingly, Taiwan is the country where budaixi is highly prominent. It’s one of several culture touchstones the island has carried over since its people politically branched off from China after World War II. Producer and director Huang Wen-Chang expands on a popular Taiwanese property with Demigod: The Legend Begins, a modern, slightly edgy budaixi movie.

Demigod’s opening minutes are something of a whirlwind. Su Huan-Jen (Huang Wen-Tze, who voices most of if not all the characters), is a young martial artist doctor. He puts his alpinist skills to the test with his sensei to reach the top of one of the five sacred mountains. Much to his surprise, he finds more than a stormy night atop the cliff. Two giant beasts are fighting each other to the death. When the seemingly more benevolent creature is almost down for the count, Huan-Jen intervenes and saves the day. Cut to Huan-Jen back at his practice as a local medicine guru, diagnosing patients by the handful. His financial situation is dire, to say nothing of his ambition to one day finally read the Limitless Celestial Book held in the library of Globe Castle. His debt is far too stee,p however, but there may be a solution. By healing the castle’s lord, he is freed of all debt and granted access to the coveted book. To everyone’s surprise, his majesty dies during the night. Huan-Jen is accused of murder and must clear his name.

The monsters at the start of the film are eventually called back into action to help advance the plot, which is just one of the many trippy story elements that guide Demigod: The Legend Begins. The adventure is serpentine, to say the least, with an army of characters populating the world Huan-Jen navigates. There is the hero’s master, the lord, the lord’s daughter and adopted son, rival clans, their leaders, two big monsters, and a pair of down-on-their-luck con artists who agree to assist Huan-Jen on his journey. Impressively, director Huang Wen Chang’s balancing act succeeds for the most part. One lingering issue is that the creative team can only come up with so puppet character designs, resulting in the occasional adversary or ally looking very much like someone else the audience saw a short while ago. If one isn’t familiar with Chinese-style names, it can get a little bit confusing after a while.

Notwithstanding some mild confusion in the early going as to who is who, Demigod is a rollicking good time. The pace is lightning quick, the dialogue is regularly funny (and modernized to a certain extent with lines such as “cut the crap!”) and, most importantly, sports a gorgeous aesthetic. Kudos to everyone involved in creating a richly coloured and decorated world.

For many North American movie fans, any mention of a movie starring puppets will conjure up memories of Team America: World Police. That film was played for laughs, poking not-so-innocent fun at the ludicrous lives of spies, world leaders, and Hollywood stars. By contrast Demigod, in addition to featuring puppets guided directly by hand rather than via strings, is completely earnest in its desire to tell a fantasy-action tale. Occasional moments produce chuckles (like when background characters engage in a swordfight and it honestly just looks like puppet arms flailing), but most humorous touches are deliberate screenwriting choices. The picture’s earnestness, coupled with the visual splendor, is what make Huang Wen-Chang’s project so joyous to behold. This is artistry of the highest order.

The filmmakers are adamant that the movie looks and feels huge. Dutch angles, fast editing for either suspense or comedic effect, an epic score that marries instrumentalism with synth, and an awe-inspiring number of sets and locations lend the endeavour with a sense of scope many might not expect from a “puppet show.”  Little details like blood on cheeks, or dirt, beads of sweat, and wavy lines indicating poison, all of them lend Demigodcredibility. What’s more, this movie isn’t made specifically for children. Some characters get owned in unequivocally R-rated fashion. Seeing it all done with practical effects adds even more charm. Computer-generated enhancement is utilized, albeit mostly for the fantasy-laden story elements.

Looking at the production’s credits, the family name Huang appears a lot. That’s because the Huangs have made a name for themselves in the Taiwanese entertainment industry with budaixi. Their production company, Pili International Multimedia, has produced hand puppet shows and films for decades. Even this movie’s protagonist, Su Huan-Jen, is familiar to long-time Pili tv show fans. This is merely the origin story of how became a prominent figure in Pili lore. The uninitiated may rest assured that Demigod doesn’t require any previous franchise knowledge. While it takes a few minutes for the story to get going (the purpose of big monsters atop the mountain at the start is initially unclear), the overarching plot is simple enough to understand and enjoy. At its heart, this is vintage hero’s journey material.

One assumes the film will be a hit in its native Taiwan. Whether this sort of entertainment travels well is up for debate. It makes for a different viewing experience. It’s like watching a manga, but not really. Or a classic wuxia film, but not really. Regardless of how one describes Demigod: The Legend Begins, one thing is certain. It offers plenty of fun with no strings attached.