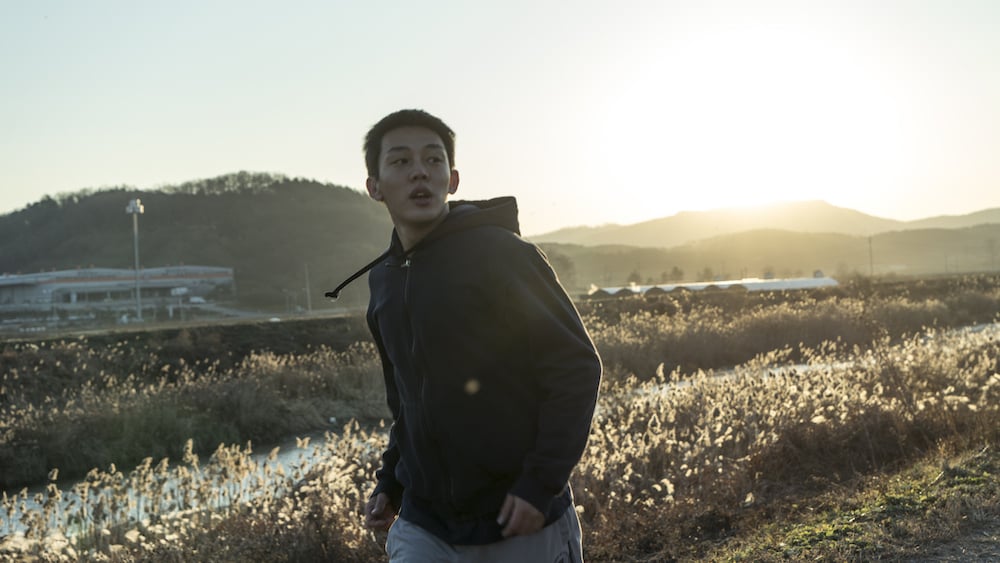 This article is part of our South Korean spotlight, highlighting some of the best films South Korea has to offer in light of Parasite’s historic Best Picture win at the 2020 Oscars.

Barn Burning is an enigmatic mystery of a short story from Japanese author Haruki Murakami, a short dreamy tale that digs deep into humanity. It’s not something I thought could stretch out into a two-and-a-half hour film, and yet director Chang-dong Lee proved me wholly wrong. The end product here is a slow-burn drift through a vastly different side of modern Korea than is normally shown in film. A wildfire steadily growing, fueled by sexual jealousy, discontent, and the frightening possibilities that lie within the unknowns of others.

Lee Jong-su (portrayed by Ah-in Yoo) is a simple man with a dream of being an author. Out of the blue he runs into a childhood friend, Shin Hae-mi (Jong-seo Jun), and the two hit it off and go out for drinks. After a brief time of fiery passion, she reveals she’s headed on a trip to Africa and asks for Jong-su to look after her cat while she’s gone. After she gets back, she’s with a mysterious wealthy man named Ben (Steven Yeun). The three of them form this complex relationship, worlds apart yet spending a good bit of time all together whilst jealousy begins to boil beneath the surface. Then Ben reveals his strange hobby, and with this confession comes a wave of questions Jong-su can’t quite find the answers for. When Hae-mi suddenly disappears, Jong-su finds himself chasing those answers, but like smoke on the wind he can’t quite get a solid grasp.

It’s a narrative based on questions, yet offers no concrete answers to almost any of them. It’s a jigsaw of a beautiful vista missing a few pieces, yet somehow those absences are what make it such a hypnotic mystery. We move alongside Lee Jong-su, trying to unravel life around him just as he is. Is there a Patrick Bateman level serial killer out there? Was there really a well over in Hae-mi’s yard? Is there any allegory to be found within his father’s sentencing for assault, or is it simply something happening as well? The second this one’s over, you’ll find yourself thinking back on every detail, wondering just how things fit together.

Outside of American Psycho, no film has quite given such a powerful difference in narrative through two equally possible sides. Life is full of questions, and generally we won’t find out specifics of absolutely everything, and that’s where the genius in Burning lies. Everyone has secrets, and there’s this aura of dissatisfaction with life hanging about all three main characters. Jong-su tries to piece things together, but in dealing with his own troubles he finds a narrative and everything just seems to feed into it. His brief fling with Hae-mi, and the subsequent unique relationship they held with this mysterious Ben, becomes a tempest hiding beneath their seemingly simple lives. Jealousy and uncertainty give birth to the darkest side of human nature.

Something that deserves immense credit in capturing the powerful feeling Burning has is the cinematography. Lengthy cuts allow the stellar cast to create this incredible mystery, and the focus on lighting and scenery truly bring something special to the forefront. The lingering shots bring the viewers into Jong-su’s world, we sit and think as he does. It’s immersive, captivating, and every scene can end up fitting into place for whichever possibility your mind decides on. Burning is a journey to go on, and the climax comes as a shock, despite events flowing to an almost inevitable conclusion.

Everything feels vivid, modern Korea presented even down to the North Korean propaganda audible in the background when near the border. Characters feel real, and digging deep into these three flawed core personalities gleams a lot to learn about life. There’s passion, disappointment, tragedy, and things are never really perfect. Jong-su’s life is also not straightforward, there are all these perpendicular story lines crossing his path. There’s his father facing prison over assault, his day-to-day farming, attempts to sell his last cow, and all this starts to be pushed aside as his obsession grows with where Hae-mi has gone, and why her apartment is suddenly clean.

Burning offers an incredibly captivating narrative, one that sticks with the viewer and leaves you contemplating the exact nature of things for weeks to come. Incredible cinematography coupled with phenomenal acting brings out the best of the world of film, and pulls together a wholly original tale with an addicting sense of mystery. There’s helplessness, determination, and obsession rising to the surface for Jong-su, and the audience feels all of this in startling clarity.