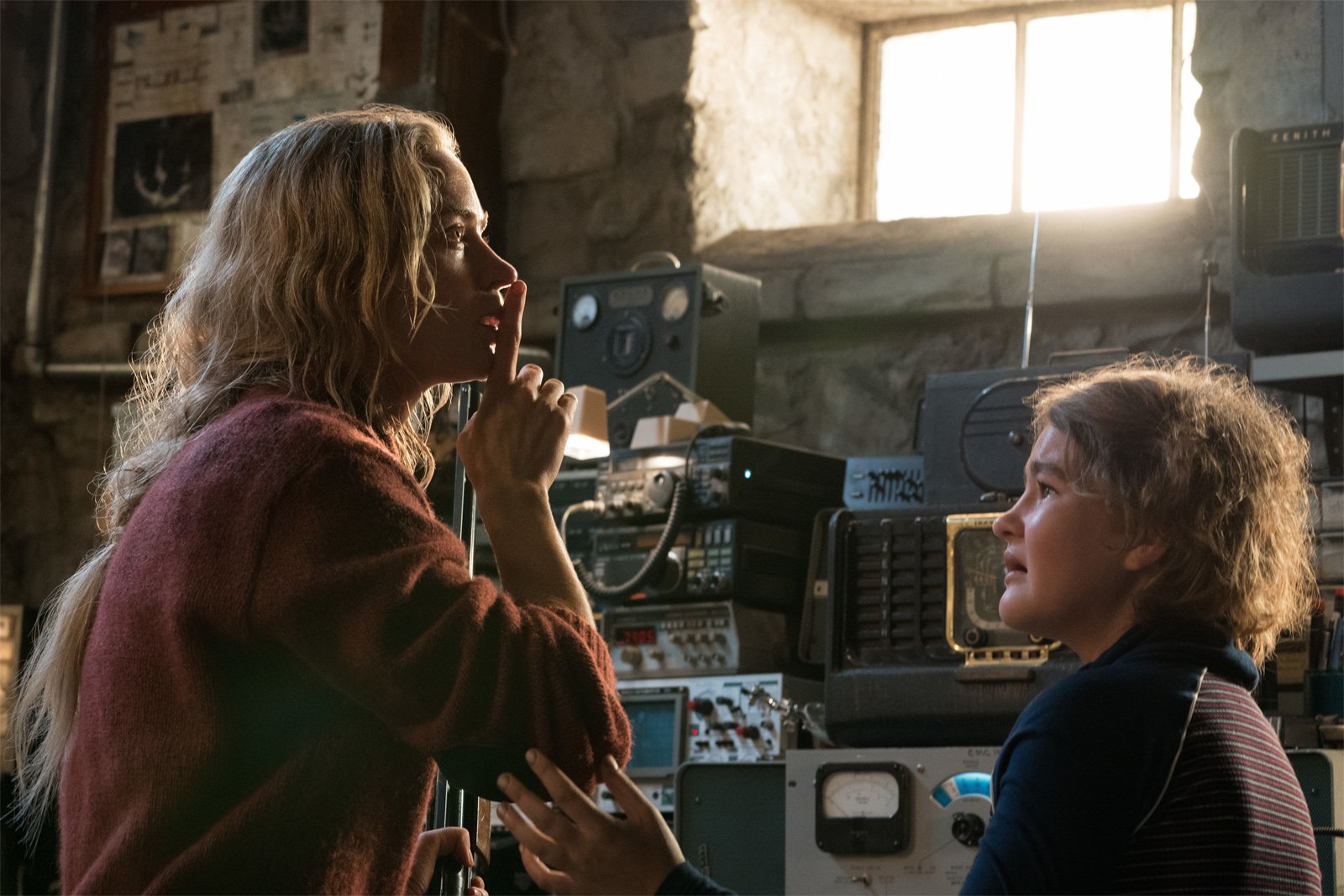 It’s a rare feat to shut up a modern movie theater audience, but John Krasinski’s home invasion creature feature, A Quiet Place, mostly pulls it off with a clever premise that turns any and all noises into anxious no-nos. Built around the concept that the tiniest peep could lead to gruesome evisceration at the mantis-like hands of blind monsters that have apparently wiped out much of the world (or at least rural New York), the film does well initially to elicit the same dread from its audience that it instills in its characters. Stop too long to think about the haphazard logic in the execution of this idea, however, and the need to register audible protests amid the tension-filled silence might be overwhelming — likely bringing about merely a swift death for the otherwise effective atmosphere.

Little setup is doled out, a refreshing choice that keeps things focused on a small family sacrificing anything it must to survive desperate conditions. Sure, the mind might wander wondering where the military is in all this, but like M. Night Shyamalan’s Signs, it’s not so important. Here the story starts well into whatever sort of apocalypse has befallen this farming community, and sees papa and mama leading their barefoot brood through a desolate Main Street, foraging for supplies. The group tiptoes down aisles, places a finger to their lips as a reminder to the young ‘uns, and still finds reasons to smile in the autumn sunshine. Despite some of the scenic beauty, however, Krasinski never lets the audience forget that something looms over them at all times; their eyes dart about like prey. But who are the predators? It’s an effective and efficient start.

The first half of A Quiet Place is mesmerizing, as Krasinski finds wonderful ways to portray jump scares that seem organic instead of cheap filmmakers’ tricks.

Eventually, we learn that the beasts lurking in the forests have an incredible sense of hearing, one that could apparently detect the creak of floorboards or even the slightest whisper. A Quiet Place contains few conversations, but those that do briefly occur take place occur via sign language, a nifty workaround that makes sense given the condition of one of the children, and a welcome bit of spare character development. The rest of the communication is handled by the impressively expressive eyes of the entire cast (which includes a bearded Krasinski, Emily Blunt, Millicent Simmonds, and Noah Jupe). Back at the homestead, nuclear life continues on in what is an almost serenic existence — if it weren’t for the constant threat of death.

The first half of A Quiet Place is mesmerizing, as Krasinski finds wonderful ways to portray jump scares that seem organic instead of cheap filmmakers’ tricks. The lack of sound becomes a safe space that he can violate at any moment simply by knocking over a lamp or introducing a squeaking raccoon. The terror in these moments is shared by viewers and participants alike, leading to a strong bond with characters that otherwise don’t have much to say. While adhering to the world it creates at the outset, A Quiet Place is top-notch horror.

Unfortunately, as things inevitably go south for the family, A Quiet Place starts to get confused by its own premise. Suddenly what is and isn’t a sonic death sentence gets fuzzy, allowing characters to make noises that earlier would have meant getting their heads chopped off by a charging space bug. Sound becomes just as much a dilemma for the film as the people struggling through it. We’re meant to believe that even the house can’t contain their voices to what prowls hundreds of yards away, yet later whimperings go undetected by a creature in the same room. Yes, there are attempts to explain this (somewhat), but real-world experience tells me that running full speed — even on sand — is louder than softly whispering among the rustling trees, and slapping a bare hand against a shower stall cannot be done silently.

For a shtick like this to truly work, the rules must be established both early and clearly, and then must be strictly followed. Believability isn’t dependent so much on realism as consistency, and this is where A Quiet Place can disappoint in its latter minutes. We’re meant to believe this family has survived this way for many months, an existence requiring nearly inhuman discipline, yet the casual way in which they blunder contradicts that; surely they would have all perished long ago. A deaf character (who would have no way of telling whether they were making sounds) only pays off in a contrived manner instead of truly exploiting the difficulties of such a condition under those circumstances. A later subplot involving pregnancy is almost laughable if pondered for more than a moment. Playing too fast and too loose with its rules, the film squanders much of that initial unease, as stakes are no longer high when anything could happen. The convenient flexibility throughout may come from teasing out a focused short story into a feature-length movie. After some dissection, one couldn’t be blamed for feeling that A Quiet Place would have been better suited to a 22-minute episode narrated by Rod Serling.

Nevertheless, those who are able to ignore that rational part of their brain will find plenty to bring them to the edge of their seat. Go with the flow and watch Krasinski prove to be a deft hand at organizing ideas to wring maximum tension out of them. A sequence involving a protruding nail absolutely kills (even if a second opportunity is curiously let go), as does the aforementioned trip into town. And though the ending comes off as a little tone-deaf, it should leave audiences both shaken and satisfied — just don’t ask questions. A Quiet Place is at its best in those early portions when its concept is seen and not heard, but Krasinki’s effort still remains a horror film worth talking about.