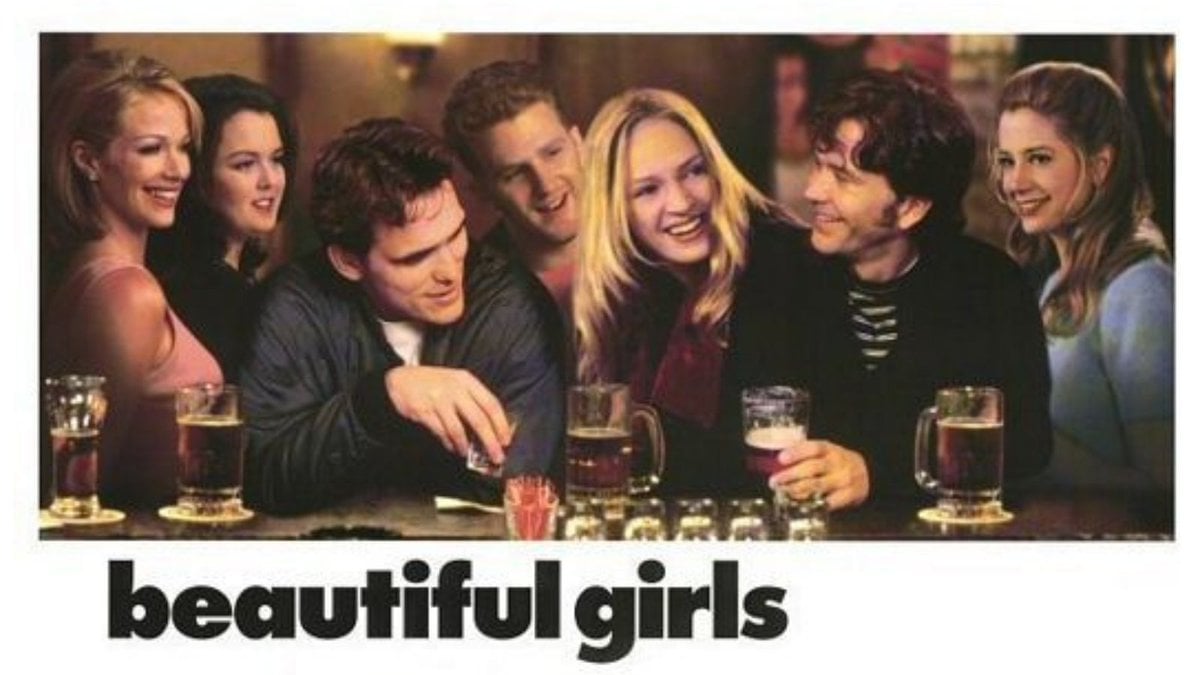 Ted Demme’s Beautiful Girls, released on this week in 1996 — 25 years ago — was a very 1980s-like film, which happened to come out in the middle of the 1990s. It’s very similar to The Big Chill, featuring a group of high school friends reunited in adulthood, but it came out in ’96 and starred a crew of Gen X actors of varying levels of stardom.

The other big takeaway, upon a rewatch of Beautiful Girls, is that it’s very much a movie about toxic masculinity, made long before there was a word for such a thing. And it’s the case even before you consider the film’s platonic love affair between an adult man and a 13-year-old girl, or the massive amount of #MeToo stuff that later came out, related to several people associated with the movie.

Beautiful Girls was directed by Ted Demme, based on a script by Scott Rosenberg; Rosenberg went on to create a short-lived TV series, October Road, a decade later, which was essentially a pseudo-sequel.

Timothy Hutton plays Willie, a jazz musician in New York who returns to his New England hometown for his high school reunion. He soon reunites with his crew of old buddies- Tommy (Matt Dillon), who’s cheating on his girlfriend (Mira Sorvino) with his high school sweetheart (Lauren Holly); Paul (Michael Rapaport), who’s stalking his ex-girlfriend (Martha Plimpton); and Mo (Noah Emmerich), whose relationship with his wife (Anne Bobby) is left largely undeveloped by the movie.

There’s a continued theme of the movie: These guys are immense shitheads, who don’t appreciate the women in their lives nearly to the degree that they should. Rapaport, in particular, is playing a wildly obnoxious character, even by the usual Michael Rapaport standards.

The film seems aware of this, at least on some level, and the plot continues until each man earns a minor, unearned redemption near the end, as they realize they should appreciate the women they’re with, even if they’re not the centerfolds on Rapaport’s wall or Uma Thurman.

Beautiful Girls throws in a few wild cards. Natalie Portman, who was 15 years old when this movie was released, plays Hutton’s neighbor, with whom he has a chaste flirtation, which is nevertheless quite a bit unseemly.

Rosie O’Donnell, as part of her brief run appearing in movies in the ’90s, plays a friend of the wives who gives a memorable, full-throated monologue about women’s bodies, but she feels like a character dropped in from a completely different movie, probably one set in Brooklyn.

And Uma Thurman shows up for a few scenes as the gorgeous visiting cousin of the local bartender (Pruitt Taylor Vince), whose purpose as a character is to teach a couple of men lessons, before heading straight back to Chicago. Thurman’s character is the kind of Perfect Woman archetype that was over the place during that particular period of cinema- a la Mary in There’s Something About Mary, she’s absolutely gorgeous, but also totally cool and one of the guys.

There’s a lot about the film that does hold up. The town has a homey, relaxed vibe and yes, there really are dudes like this in most American small tones. And the cast is a large collection of likable actors, including John Carroll Lynch in a bit part as a bartender, and David Arquette as Hutton’s younger brother.

It may be set in New England, even though actors like Rapaport and O’Donnell do their New York accents without adjustments. Beautiful Girls was filmed not in Massachusetts but in the Minneapolis area, around the same time Fargo was, which certainly explains why there’s an ice-fishing scene. The movie also included Neil Diamond’s “Sweet Caroline” as a singalong before that song became associated with the Boston Red Sox (the Sox started playing it at games the following year, although not for any reason having to do with the movie.)

However, Beautiful Girls has taken on a bit of an ugly tint in the years since, and not only because of the Hutton/Portman stuff. The film was released by Harvey Weinstein’s Miramax Films, and multiple women in the cast, including Thurman, Sorvino, and Holly, were among the many Weinstein accusers. Hutton was himself accused of rape — of a girl who was, yes, 14 at the time — a couple of years ago, leading to the cancellation of a network TV show, though he has maintained his innocence. Michael Rapaport has been accused of some not-so-great stuff himself.

Perhaps the saddest story about Beautiful Girls is that of Ted Demme, the director. The nephew of Jonathan Demme, he directed some important early stuff for MTV, and later directed Monument Ave, Life, Blow and the documentary A Decade Under the Influence. Demme died of a heart attack in 2002, at the age of just 38, leaving behind young children.

Beautiful Girls has become a beloved movie in some quarters over the last 25 years, but there’s undoubtedly a dark side to it.