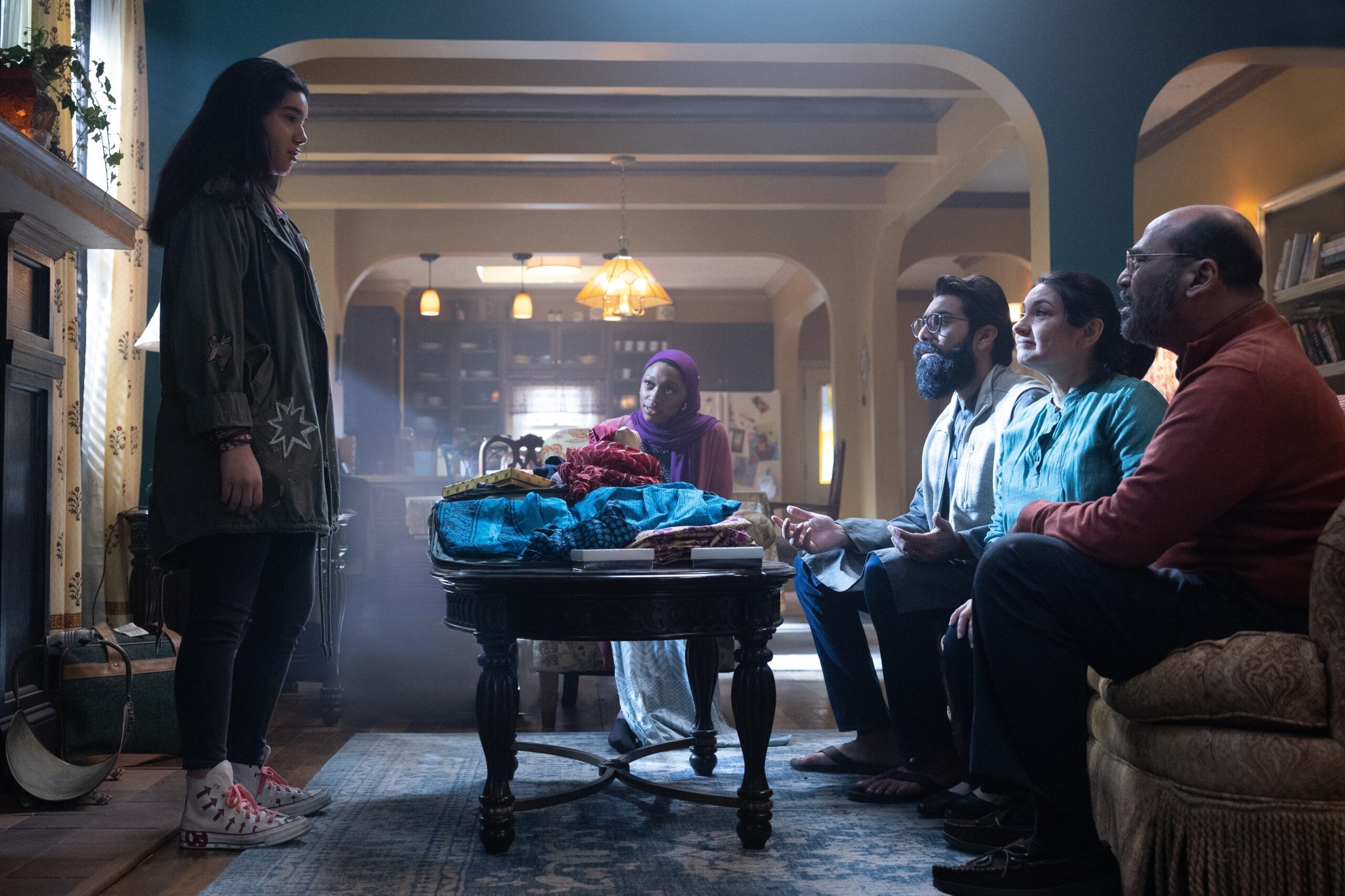 The classic hero finally embiggens in the smash hit “No Normal.”

Over the course of its first 5 episodes, Ms. Marvel has particularly excelled when it explores intimate and everyday moments that allow for character development, community exploration, and worldbuilding. The season finale, “No Normal,” takes a risk by shifting the focus away from its usual strengths to indulge in some high-octane, classic Marvel superheroics. It luckily manages to execute these elements extremely well, and the series’ beautiful and distinctive design style really shines in the action-packed finale.

Picking up where Episode 5 left off, Kamran (Rish Shah) now has superpowers of his own. Bestowed upon him by his mother Najma (Nimra Bucha), Kamran’s powers look very similar to Kamala’s (Iman Vellani). And, like Kamala, he initially has difficulty controlling them. The episode shows Kamran and Kamala trying to escape from the Department of Damage Control, who are trying to detain them; the characters have to overcome the violent DDC agents while Kamran also struggles to get a grip on his out-of-control powers. With a little help from friends and family, the characters execute an elaborate and daring escape plan.

The result is a sort of Home Alone sequence where the characters set up amateurish booby traps around their high school using random things they find lying around. The idea could have been cringe-worthy, but directors Adil El Arbi and Bilall Fallah pull it off in a way that successfully combines humor with adrenaline-pumping action. Watching the heavily-armed DODC agents get pummeled by baseballs and high school science experiments proves more enjoyable than gimmicky, and the sequence is a lot of fun.

After the more comic action sequence, the finale then proceeds into much more highly-produced superpower scenes that are downright beautiful. Because Kamala and Kamran both have light-based powers that create colorful, luminescent crystals, a fight scene involving both of them is absolutely stunning. The audience is treated to a visual feast of flying crystals, dazzling light, and intense colors, and the visual design work of the show continues to impress. Arbi and Fallah create absolute art out of every frame, and it is wonderful to watch.

While this episode is more high-octane than the previous, it still makes room for intimate moments. Kamala’s parents Muneeba (Zenobia Shroff) and Yusuf (Mohan Kapur) continue to be absolute highlights of the show, and they each get sufficiently emotional and compelling contributions to the episode. Kamala’s close friend Nakia (Yasmeen Fletcher) is also back, and Fletcher proves again why she is one of the standout stars of the series. Every moment that Nakia is on the screen is a good one, and the only bad thing about Nakia is that there isn’t more of her in every episode.

Shah really shines in this episode as well. While Kamran was always an interesting character, “No Normal” really sees him developing more depth, and his complicated relationship with his powers, Kamala, his mother, and the Red Daggers all lead to a much more compelling character than he has been so far. Shah does a stellar job with this new material. While the series is now over, fans can hopefully look forward to seeing more of him – as well as more of Nakia and the Khans – in future MCU productions.

Importantly, even the action-packed moments of the episode still manage to center on community, intimacy, and family, and it maintains these important themes even while Kamala is punching DODC agents with her giant crystal fists. Without spoiling too much, I can say that the episode does a phenomenal job making sure that Kamala’s community mindset and deep connections to others form the cornerstone of both the Home Alone action sequence and the later, more serious, one, as the episode combines action with a signature Ms. Marvel heart.

The episode’s biggest flaw is the same as the series’ biggest flaw as a whole: it struggles a lot with villains. Ms. Marvel seems hesitant to admit that state institutions can be corrupt, which is strange for a series that centers on people from a group so often attacked by violent state institutions. While the main villains of the finale are the DODC, the episode reveals that the real problem is one individual agent – the unambiguously evil Sadie Deever (Alysia Reiner) – who ignores commands in order to fuel a particularly violent personal ambition.

When the larger DODC decides that they want to call off the attack – realizing that using guns to attack teenagers at their high school is probably bad PR – Deever decides to ignore their orders to leave Kamala and Kamran alone. She is then fired afterwards. Even the local cops on the scene choose to turn against Deever and protect Kamala. It turns out that the system of violent oppression wasn’t actually bad; there was just one bad apple in the bunch!

By 2022, the majority of audiences have moved past the point where these sort of narratives hold any weight. In an era where social media has brought awareness to a lot of people about the need for systemic, complex change in a state with fundamentally corrupt institutions, the classic scapegoat story of the “one bad cop” doesn’t really hold up.

Trying to absolve the DODC at the end by having the institution choose to back off is a rather weak-willed approach that puts all of the blame for every problem in the series squarely on the shoulders of one person. It ignores the larger structures of harm in place that allowed a military force to casually assault a mosque without fear of serious repercussion. While characters do spend a lot of time calling attention to systemic racism and discrimination, the ending somewhat tries to undermine this dialogue by placing the blame on one power-hungry individual and contradicting a lot of its earlier systemic critique.

From the underdeveloped and rushed character work of Najma to the weird cop apologetics taking place with Deever, Ms. Marvel was never quite sure how to deal with villains. Luckily, it knows how to tackle heroes and civilians, and it spends most of its time exploring these two groups, so the bulk of the series focuses on its strengths.

The episode ends with some surprising events, including a revelation that will likely make many a fan scream at their TVs in shock and delight. Ms. Marvel has been a truly spectacular experience, and it’s been an honor to review this stellar show every week. While fans (and I) will miss Kamala Khan, her friends, and her family on their TV screens each week, they can hopefully look forward to seeing more of these characters in future MCU productions. Iman Vellani has a future as bright as Ms. Marvel’s powers: she and Fletcher have stolen the hearts of many viewers, and the entertainment industry is lucky to have both of them.