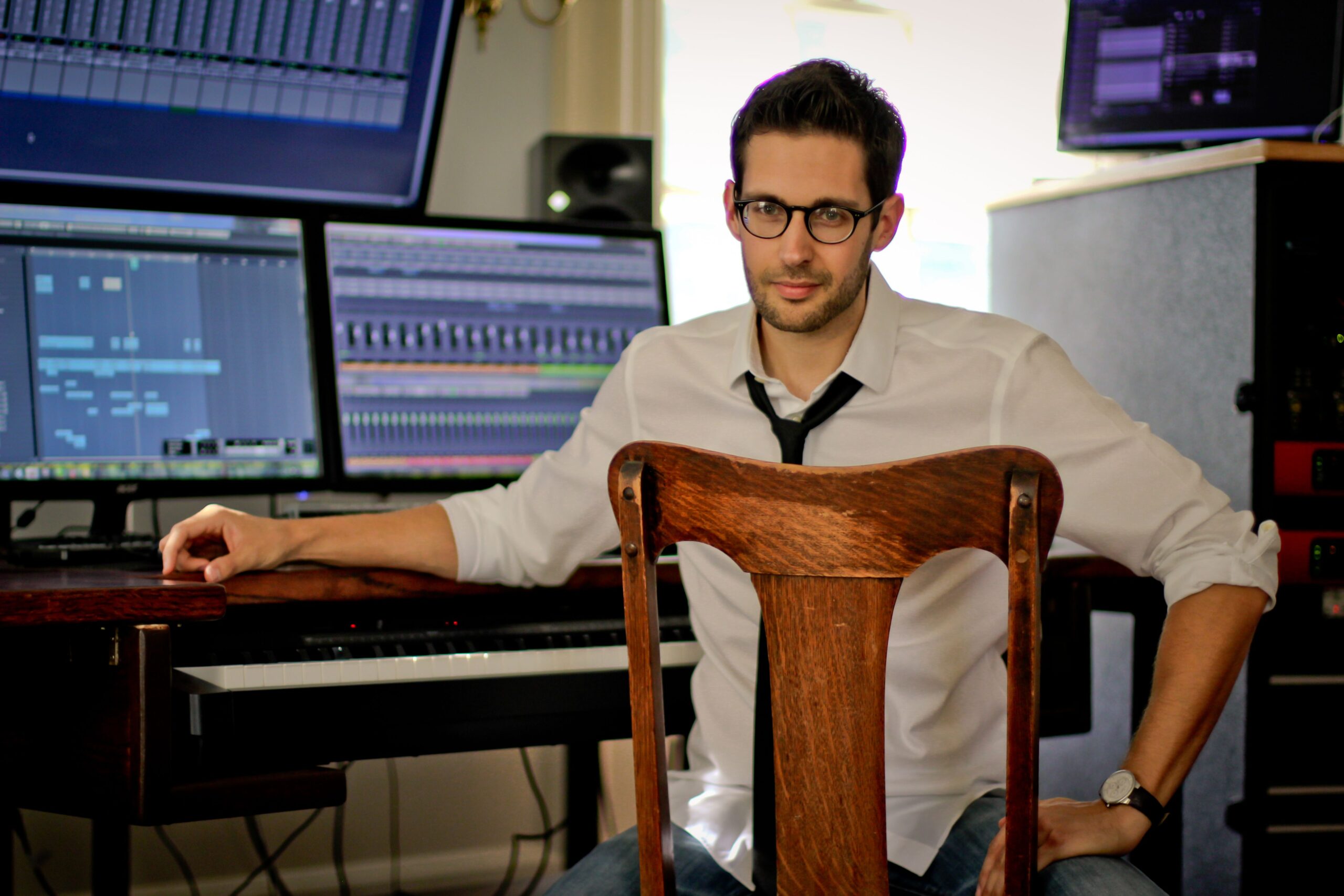 With the current state of the world, we could use a little magic in our lives at the moment and that is exactly what Sony Pictures Animation is providing at the moment. Their recent Netflix film The Mitchells vs The Machines was honestly one of the best films so far this year and they have another winner on their hands with Chris Appelhans’s upcoming Netflix film Wish Dragon, with the genie in a bottle style story of college student protagonist Din (Jimmy Wong) and cynical dragon Long (John Cho).

I was lucky enough to sit down with the composer for the film- Philip Klein– and got to listen to some of the film’s beautiful score. Let’s take a look at what he had to say about the creative process for the music of Wish Dragon as well as the challenges that came with it.

Tilt: What was your inspiration when creating the score for Wish Dragon?

PK: I’ve always loved animation, I think there’s an escapism in allowing yourself to just be swept away in that world.  When I first saw the early storyboards for Wish Dragon, I knew it would be a rich tapestry of color, culture, and beautiful storytelling, so the inspiration was never hard to tap into right from the beginning.  Chris Appelhans created these beautiful arcs and journeys for so many of the characters so it was pretty easy to find myself hearing music whenever I watched the film or thought of a character.  Personally, I found the relationship between Din and his mother to be one of the most beautiful and so I started with those scenes (which really run the gamut from hilarity to angst to profound emotion).  I always believe that I can really nail the sound or theme for a character or relationship, I can use that to start weaving a journey in the music.  It’s ultimately my job to find the heart of the story, allowing myself to react and write honestly from there.

Tilt: Were there any other animated film soundtracks or soundtracks in general that inspired you?

PK: Not specifically for this film, but in general, I’ve found inspiration from many scores…probably too many to ever count.  I try not to be too influenced by them, so early on in the process I really have to shut down listening to other music so that I can have clearer ears.  I spent the first few weeks watching a lot of animated films, though, just to see how others do their amazing work.  I did really enjoy Dario’s score in Kubo and the Two Strings and I think Thomas Newman’s Finding Nemo is about as beautiful as they come.  Neither directly inspired how I approached Wish Dragon, but I was inspired by how beautifully they scored their respective films.

Tilt: Are there any composers whose work you were inspired by also?

PK: I’m fortunate to have worked with James Newton Howard as an orchestrator over the past few years and I’d be lying if I didn’t say his approach to scoring films doesn’t inform mine.  I believe James is a true artist about crafting his scores.  Much of my childhood was ‘scored’ by James Horner and I think Thomas Newman’s work with Pixar is just brilliant.  They all are brilliant.

Tilt: How did you go about capturing a modern-day Shanghai within your score?

PK: The score has this dichotomy between the modern present and the more wistful, ancient past.  It was easy enough to say that for the modern story elements we would use more of the electronic elements and for the past we would rely more heavily on the orchestra and Chinese instruments but what Chris and I discovered is that the line is often blurred and we never wanted it to feel disjointed.  So what we ended up doing is using the Chinese elements as a kind of bridge between the two; the cultural and musical glue that binds the two worlds together.  Early on in the film we see Shanghai transform into this thriving metropolis so there’s a pretty raucous electronic-heavy cue that launches into the city but we kept this constant churning of color with the Chinese instruments running underneath to ground us and keep a sonic reminder of where the story is headed.

Tilt: In the same vein, how did you go about representing the fantasy and magical elements of the film within the music?

PK: It’s hard to replace the magic and sweep of an orchestra, especially in animation.  I think when you’re dealing with a fantastical, magical dragon, the orchestra is a natural fit to carry you to these places. We had the pleasure of recording the New Zealand Symphony Orchestra for this film and they truly played their collective heart out; but again, we never wanted the score to go too far in one direction. Even in the most orchestrally dense moments of the score, there is an undercurrent of Chinese instruments pulling us into the world and connecting all of the storytelling dots.

Tilt: How did you set about combining this fantastical nature with the Chinese setting of the film within the soundtrack?

PK: This was where the magic of all the beautiful Chinese instruments really shone through.  Chris and I spent months sending every kind of audio and video reference we could find back and forth when I first started getting involved.  We always knew that we wanted to use Chinese instruments, but to what extent their role would be and the space they would occupy was the biggest question.  Some of my earliest demos were very forward with the Chinese instruments but it felt wrong for this picture.  Chris wanted the story to feel universal, so having the Chinese elements too forward felt like we were pushing too hard in an Eastern direction.  What we ultimately did was settle on a palette of 8-10 Chinese instruments that I manipulated into these beautiful pulses, pads, textures and other sonic “ear candies” and then started sprinkling them throughout the different moments in the film. It ended up giving us just the right balance between the fantastical and the cultural.

Tilt: There is an interesting fusion of electronic music and traditional Chinese instruments in the score. How did you find the perfect balance?

PK: A lot of messing up!  Scoring a film is a process and we had a good deal of time on this film to really dig our heels in and experiment on every level.  As I said above, once we had our palette of instruments in place, we could start coloring the score.  I often would go too far and then we’d strip it back down until we both felt we were adding the right nudge or emotional lift to the scene.

Tilt: Were there any instruments you were drawn to more than others when creating the music?

PK: I loved learning from all of the players.  I kind of went to musical boot camp for a good while at the beginning of this score where I had video interviews with soloists throughout the world.  They would play their instruments beautifully and I would ask a bunch of really ignorant questions about what was capable or not.  It was an amazing learning experience and opened so many new colors to our score.  I think my personal favorite is the sheng, which is one of the most unique looking instruments you’ll ever find.  It’s basically a mouth organ that the player blows into and creates anything from shimmering waves, to beautiful pads or intense rhythmic energy.  It’s all over the score, I couldn’t seem to use it enough.

Tilt: The themes of East meeting West are also prevalent in the score. Was it difficult to achieve a good balance of the two?

PK: I think it’s always difficult to achieve balances in a score like that.  I knew that Long’s character was intrinsically connected to ancient China so to me that was where the “East” sound felt most natural. Chris and I never wanted the melodies to feel blatantly Chinese, so as we spoke about above, the Eastern sound comes more from the Chinese elements, harmony and color we mixed into the music.  Din’s arc felt more universal to me; a boy trying to find his best friend, so it was ok to rely a bit more on the modern Western elements of the score to pull us back into the present day.

Tilt: Lastly, what is your all-time favourite musical score that made you want to create music for a living? Out of curiosity more than anything!

PK: Jurassic Park!  When that glorious trumpet fanfare played over the first helicopter ride into the park I was hooked for life.

Tilt: I loved the Wish Dragon music and can’t wait to hear more of your work in the future!

PK: Thank you so much, Antonia!

Make sure to check out Wish Dragon when it hits Netflix this Friday, June 11th and for more information on Philip Klein and his impressive work, have a look at his biography below as well as the trailer for Wish Dragon.

PHILIP KLEIN (as of May 21, 2021)
Philip Klein’s music has been heard in film and television projects for Sony, Disney, Pixar, Lionsgate, ABC and CBS. Recent projects include Roadside Attractions drama, “The Last Full Measure”, the upcoming Sony Pictures Animation “Wish Dragon” and Neon’s “Pig”. He also penned 18 new orchestral arrangements for Aerosmith’s LasVegas residency, “Deuces Are Wild.” As an additional writer, Philip has collaborated with some of the finest composers working in film and TV, including Harry Gregson Williams, Carter Burwell, Alex Heffes and Fil Eisler. He is also in demand as an orchestrator, having had the honor of working with James Newton Howard, Alexandre Desplat, Ludwig Göransson, Hildur Guðnadóttir, Steve Jablonsky, David Buckley, Stewart Copeland and several other amazing artists. Recent orchestration credits include the Oscar winning “Joker”, Oscar nominated “News of the World” and Disney’s “The Mandalorian”. After a steady diet of drum corps and classical music throughout his childhood, Philip’s formal music education took him to Chicago where he studied trumpet performance and composition at Northwestern University. In 2011 he was selected as one of six fellows for the Sundance Institute’s Film Composing Lab. Philip is infinitely indebted to his mentors: Harry Gregson-Williams, Alan Silvestri, Penka Kouneva and Peter Golub. Hemaintains a studio in Altadena and is represented by Andrew Zack at the Gorfaine Schwartz Agency.