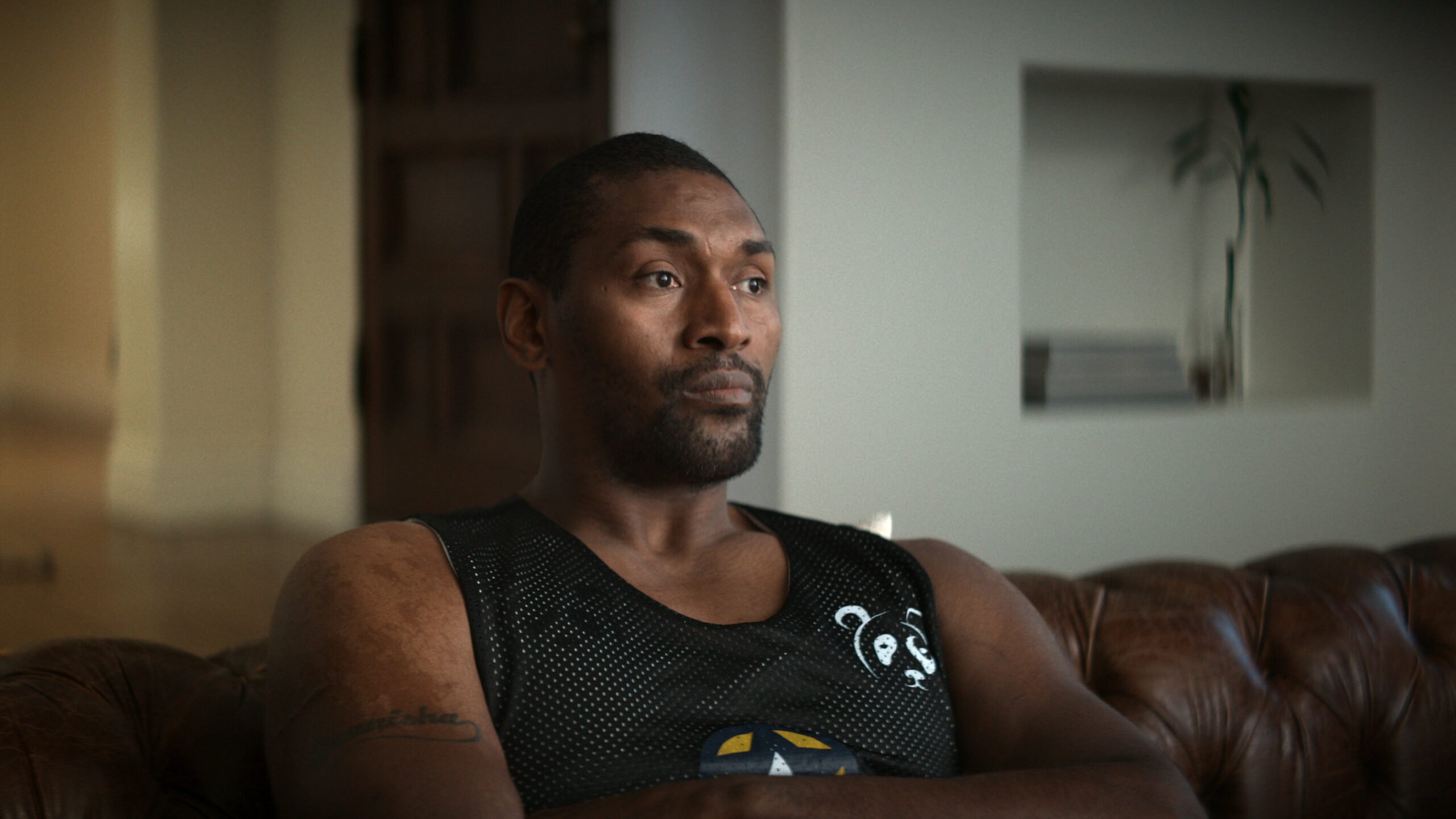 Untold, Episode 1: “Malice at the Palace”

Everyone who was following the NBA at the time remembers where they were on the Friday night of  November 19, 2004. That night, the Detroit Pistons and Indiana Pacers engaged in a brawl during the fourth quarter of the game, one that spilled into the stands, and included Pacers Ron Artest and Stephen Jackson taking swings at fans.

The incident led to lengthy suspensions, what was essentially the instant implosion of a contending Indiana team, and a great deal of handwringing about the image of the league, with the word “thugs” being used quite often in sports commentary. And it wasn’t even entirely by right-wing forces- even liberal sports stalwarts like Keith Olbermann and Bob Costas used the t-word to describe the participants.

A lot of documentaries in the recent past, including Framing Britney Spears and Woodstock ’99: Peace, Love, and Rage have looked back on massively covered events from 20 or so years ago, and to point out why the conventional wisdom of the time was somewhat off. Netflix, with the first episode of a new sports series called Untold, looks back at that infamous brawl, which has become known over time as “The Malice at the Palace.” That’s also the name of the documentary episode.

Untold comes from the producers of the popular Netflix cult documentary Wild Wild Country, and the Palace episode was directed by Floyd Russ. It debuts on August 10, and in un-Netflix-like fashion, the episodes will arrive once per week.

The documentary, featuring interviews with the key participants while mixing in footage that’s not typically been part of news accounts of the brawl, takes the line that the villains of the episode were the fans in Detroit, as well as the media culture that vilified the players as “thugs.”

The NBA, meanwhile, later moved to try to move the league away from “hip-hop culture,” through such measures as instituting a dress code, which was somewhat racially questionable. It was a very different NBA than the one today, in which commissioner Adam Silver is generally supportive of players’ political activism and even put “Black Lives Matter” on the court during the NBA bubble.

The documentary is a fascinating exploration of the events, although it doesn’t completely exonerate the players. Plus, the idea that the Detroit fans were out of line is far from an unheard-of position-  and in fact, the ESPN studio crew immediately after the brawl had actually taken a position far more favorable to the Pacers’ players than most sports media would be in the weeks afterward.

The film begins with the background of where the teams were at the time, having fought a tough playoff series the season before that Detroit won; by the fall of 2004, the Pacers were looking like a surefire playoff contender in the Eastern Conference. The brawl, and the suspensions that follow, would make quick work of those aspirations.

The examination of the brawl itself begins about 26 minutes into the 70-minute film.

We all remember the sequence: Artest fouled Wallace on a layup, and Wallace shoved him back, leading to pushing and shoving among the players on both teams. Then, after Artest escaped the fight to lay down on the scorer’s table — a de-escalation trick, he says, that he learned from his therapist —  a fan threw a full bottle of beer at him. After that Artest and Jackson jumped into the stands to get at the assailant. There were additional fights and punches, including Artest slugging a fan who had wandered onto the court.

Artest, Jackson, and O’Neal all got lengthy suspensions, as did the Pistons’ Ben Wallace, while some fans went on to face criminal charges (the players ultimately pled no contest to charges and got probation.) While the players would continue their careers, and Artest even managed to stay in the league for 13 more years and win a championship with the Lakers, the Pacers were essentially done as a contending team for a decade.

There are illuminating interviews with most of the participants, expertly edited with the contemporaneous footage. We also hear from a couple of Pistons fans involved with the brawl, although I appreciate the doc not featuring any Pistons fan declaring “ya gotta understand: Detroit, we’re a blue-collar town. We’re tough.” But we get the participation of some bozo in a multi-colored wig, showing again that any attempt by sports media to designate someone “the voice of the fan” can only end in tears.

The players aren’t past taking shots at each other, as Artest is criticized for taking time off during the season to promote his rap album, and claiming a death in the family before appearing at an awards show.

We also hear from three police officers who were on the scene, among the very small law enforcement presence at the arena that night.  One claims not to have recognized Pacers legend Reggie Miller, who was inactive for that game and wearing a suit. This is even though Miller had been with the Pacers for 14 years by that point, is 6’7″, and is one of the most distinctive-looking people in the world. “How do you not know Reggie Miller is on the Indiana Pacers?,” Stephen Jackson asks incredulously.

But the man who threw the cup at Artest ended up getting caught for a surprising reason- the prosecutor recognized him as someone who had dated the prosecutor’s neighbor, leading to his arrest. We also learn that police came to the locker room with the attention of arresting O’Neal, who told them he was getting on the bus and they could talk to his lawyer.

Most of this was also explored two years ago in the Showtime documentary A Quiet Storm: The Ron Artest Story, and Jackson and O’Neal repeat the story that was that doc’s most memorable moment: Artest, in the locker room immediately after the brawl, earnestly asking his teammates if he thought they were going to get in trouble.

Jackson, who turned out to be a lifelong friend of George Floyd, emerged as an eloquent voice in the months after Floyd’s murder, although he gave up some of that goodwill not long after with some anti-Semitic tweets; none that comes up in the documentary.

The Players Tribune is involved with the production of the Untold series, indicating that it’s likely to tell the players’ side of the story in most respects. Overall, it’s much preferable to Dark Side of Football, a Vice series from earlier this year that tried to adapt the successful Dark Side of the Ring formula to the NFL, but did so in about the most cliched, lazy manner imaginable, treating the Cleveland Browns’ cutting of quarterback Bernie Kosar in 1993 as such a scandal that it needed examination and re-litigation in two of the six episodes.

It may not be up to the standards of ESPN’s gold-standard 30 for 30 series, but the Malice at the Place installment represents a promising start for the Untold series.