The first season of Castlevania moved along at a deft clip. The storytelling was epic, the action was fast and frenetic, and there always seemed to be something happening. In fact, one of the main criticisms of Netflix‘s first stab at Konami’s vampire-slaying saga was that it was too brief.

At a mere 4 episodes, fans could be forgiven for wanting a bit more from the inaugural season of Castlevania, and with this in mind, it would seem that the expansion to 8 episodes for the series’ second season would be a natural progression. However, while the runtime has increased for Castlevania‘s sophomore effort, there may not be the depth or breadth of content to justify the extra 2 hours.

The main issue with Castlevania‘s second season is that its most interesting characters spend half the season doing next to nothing. I kid you not when I say that Trevor, Sypha and Alucard, the protagonists of this series, spend literally 4 of the 8 episodes puttering around in a library. While one can recognize how this allows these new allies to engage in banter and develop as characters, it makes for some pretty tedious story-telling. 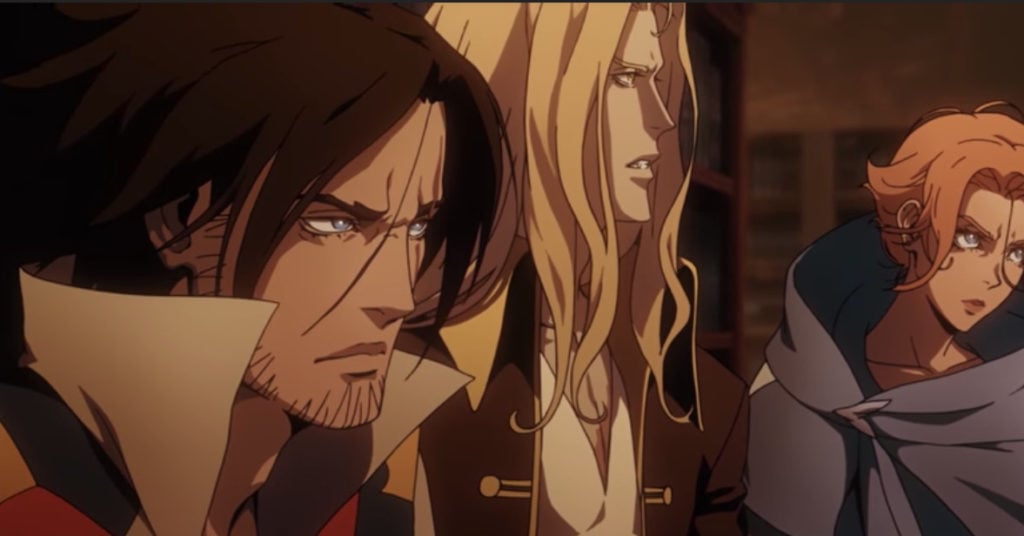 While it’s good to finally have the whole team together, it would be nice if they had a smidge more to do.

Likewise, Dracula, who arrived as a shockingly effective villain in the first season of Castlevania spends a vast chunk of the second season brooding in his study while his subordinates make reports to him. All in all this sidelining of the central protagonists and antagonist is easily this season’s biggest weakness.

Luckily, however, there is some fresh blood to keep things from totally going stale. As Dracula gathers his war council in the premiere, many new characters are introduced. Fans will recognize Carmilla almost immediately when she appears, and she is faithful to her treachery and deceit from the series, most notably in Symphony of the Night.

Peter Stormare also joins the cast, which is a welcome addition. Unfortunately, he’s almost completely wasted as the Viking warlord turned vampire, Godbrand. Stormare is an actor of considerable talent, so it’s a bit of a bummer to see him offered so little to do in Castlevania. 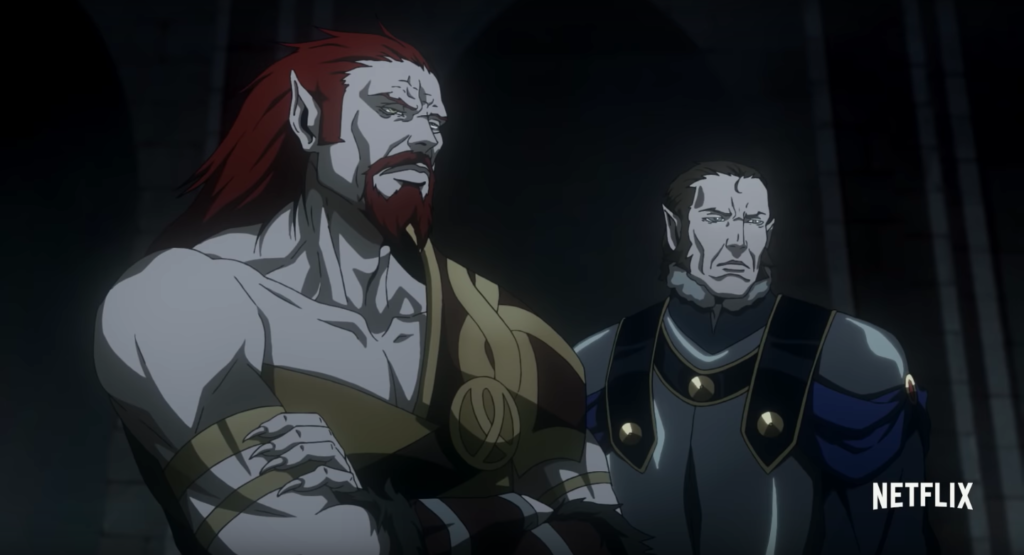 Peter Stormare joins the cast of Castlevania in season 2. Unfortunately, he isn’t given a lot to do.

Either way, the strongest additions by far are the human characters who serve on Dracula’s council. Hector and Isaac are placed in charge of the mission to exterminate humanity, and their place in the show is a fascinating one. Both humans who despise their own kind due to the cruelty they’ve endured, they seek to eradicate their own species at the behest of Dracula. Both characters are given a lot more depth than would be expected for their roles, and it’s a welcome breath of fresh air with so much of the cast just sitting around for vast swathes of time.

They also run his devil forges, a very cool part of the Castlevania mythology that serves to explain the never-ending supply of demons and monsters in the series. Seeing the devil forges at work is actually pretty damn cool, much like how it’s surprisingly satisfying to see the inner machinations of how Dracula moves his castle to new locations.

In fact, fans will recognize lots of fun additions being added from the franchise canon. I won’t spoil them here but just to give you an idea: iconic weapons, enemies, and bosses do make key appearances in the second season. Also key is the use of the Belmont ancestral home as a backdrop, a place where other series protagonists are referenced and name-dropped in a bevy of Easter eggs for eagle-eyed fans. 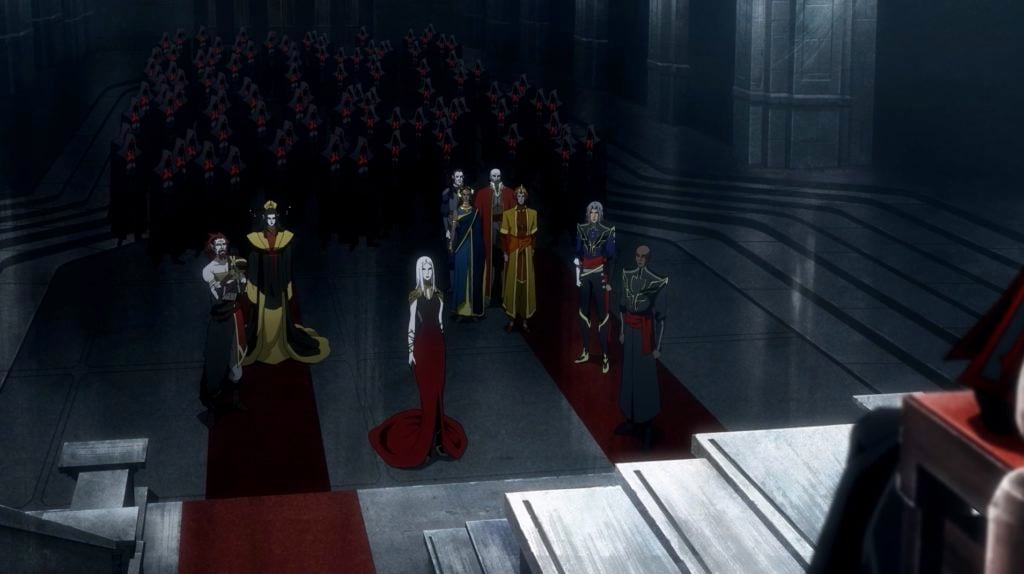 While a whole host of new characters shows up for Castlevania’s second season, only a few of them are developed enough to truly matter.

All in all Castlevania‘s second season isn’t a total disappointment, but the amount of time it spends dragging its heels might really leave you wondering if 8 episodes were the best fit for this amount of storytelling. For every cool battle scene or natural addition that improves the quality of the narrative, there is another scene of Trevor and Alucard teasing one another in a library, or Dracula staring mournfully into his fireplace.

Now, just to give a clear and concise disclosure, Netflix only offered us episodes 1-6 of the 8 episode season in advance, and things did seem to really be picking up in the 6th episode especially. So if you find yourself wanting more with the new season of Castlevania, as this reviewer did, it’s worth noting that the best may be yet to come. 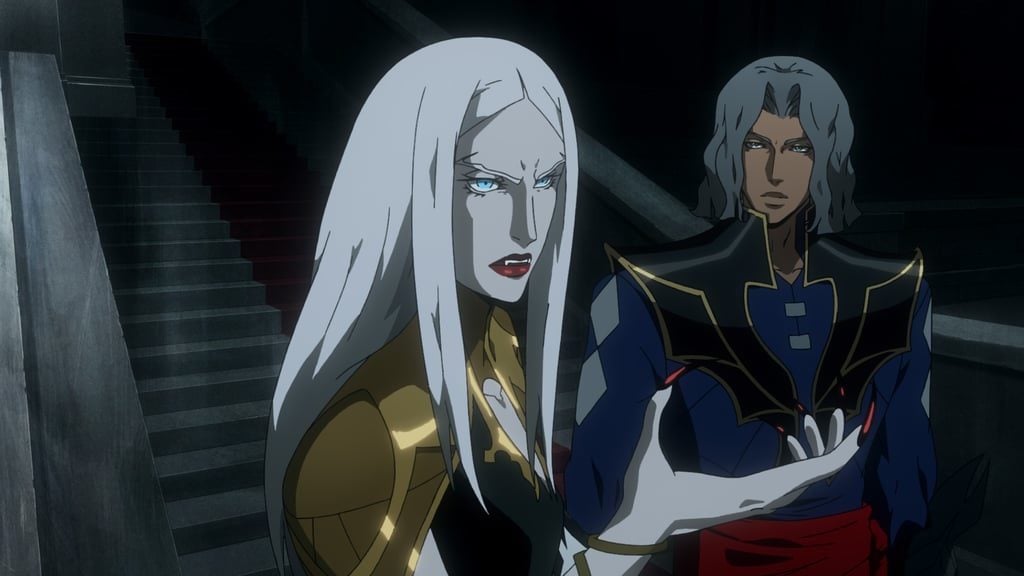 Longtime fans will probably find the fan service and easter eggs to be enough to propel them through. More casual fans, however, may be left wanting more.

Either way, if you enjoyed the first season of Castlevania, you should find enough to like here to make the short trip through the second season worthwhile. There are some excellent moments, and even if the action is more sparse, it does pack a bloody and satisfying punch when it arrives at last. Those who are not die-hard series fans, however, might not find much to sink their teeth into.

Castlevania will be released for all Netflix subscribers on October 24th.