To say that shock-auteur Lars von Trier has explored dark subject matter in his past works might be the understatement of the century. However, even with that obvious caveat out of the way, The House That Jack Built is a shockingly visceral and truly devastating experience.

This is, of course, not to suggest that a man whose films have contained everything from a coat hanger abortion to a blunt force castration was ever aiming for the satisfaction of any film-goer, let alone your average one, but the Danish provocateur has made his most challenging film yet in The House That Jack Built. Not content with just the disturbing subject matter of Dancer in the Dark or Melancholia, the unsettling inhumanity of Dogville or Manderlay, and the outright gruesomeness of Antichrist, The House That Jack Built opts to straddle all three of these lines at once. 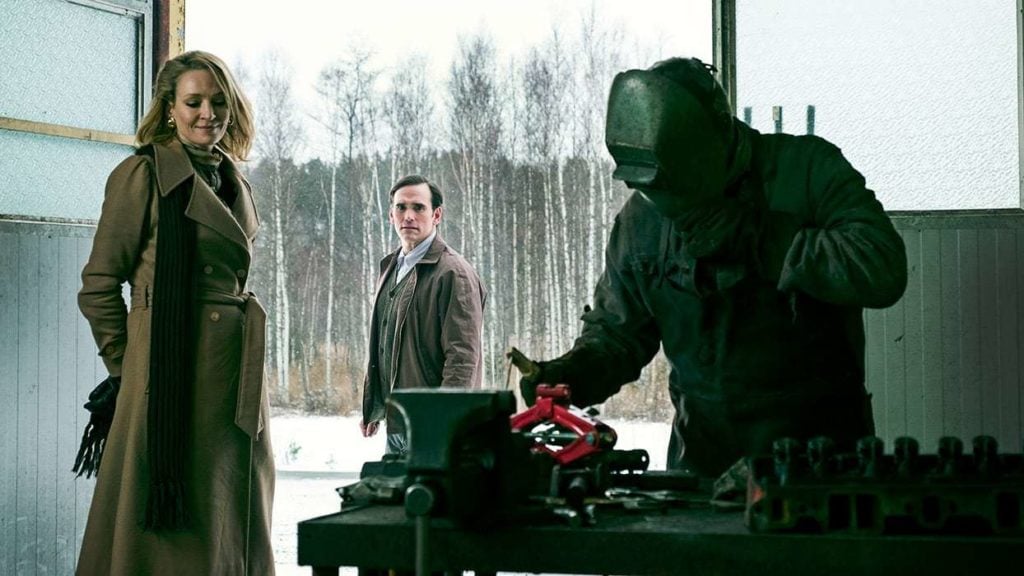 It makes for a film that — despite its quality — is difficult to recommend to just about anyone. Like Hereditary, it may be too artsy for your average horror fan, and gore-hounds will have to wade through heady philosophizing between kills, the likes of which those unfamiliar with von Trier’s work might find utterly tiring. Shrinking the audience of this film further, The House That Jack Built also contains truly off-putting and unsettling depictions of violence against women, children, and even one unlucky animal.

Though nearly all of the violence is savage in its depiction, it will be the ungodly cruelty that serial killer Jack (Matt Dillon) shows to a beaming mother, whose children he brutally executes in front of her, that will leave the harshest of lasting effects. When I heard about mass walk-outs at the Cannes Film Festival earlier this year, my mind immediately went to these scenes. These murders and their grim aftermath are some of the most horrific images ever put to a piece of film.

So again, the question becomes whether you can truly enjoy a film like this, or even “like” it per se. You can admire the boldness of von Trier’s wholesale leap into the depraved world of serial killers, a subject he researched for years leading up to the making of The House That Jack Built. You can marvel at Matt Dillon’s chilling return as the sadistic narcissist and serial murderer, Jack. You can even revel at the artistry of some of von Trier’s wildly ambitious shots, many of which mirror famous works of fine art. But even with all of those things to marvel at, it’s hard to imagine anyone enjoying their time with this film. Like Pascal Laugier’s grim torture-fest, Martyrs, you don’t enjoy a movie like this so much as endure it.

You will not find the kooky levity of Rob Zombie or Eli Roth here, nor will you find characters forming bonds and uniting together to take down the villainous killer. On the contrary, much like American Psycho‘s Patrick Bateman, this unrepentant murderer scarcely even faces much in the way of adversity, let alone any actual justice for his crimes. It is this lack of consequences, along with the world it frames this story around, that may actually be the harshest injury that The House That Jack Built inflicts upon its audience.

This is a devastatingly cynical piece of work in a way that no other von Trier film comes close to emulating. In one scene Jack implores his girlfriend to scream for help before he savagely maims and murders her. A policeman sends her back with him, and her screams go completely unanswered by anyone in her apartment, or on her street. Only once she has completely lost hope does he finally begin the act of putting her out of her misery.

Another scene sees Jack praising “icons” like Idi Amin, Adolph Hitler, and other vicious murderers like himself, who he admires and looks up to. A truly unsettling series of images of Nazi war camps, famine-riddled corpses being pushed by bulldozers, and wholesale crimes against humanity flashes across the screen as Jack waxes poetic about analogies to wine-making and marvels at the great art of death. 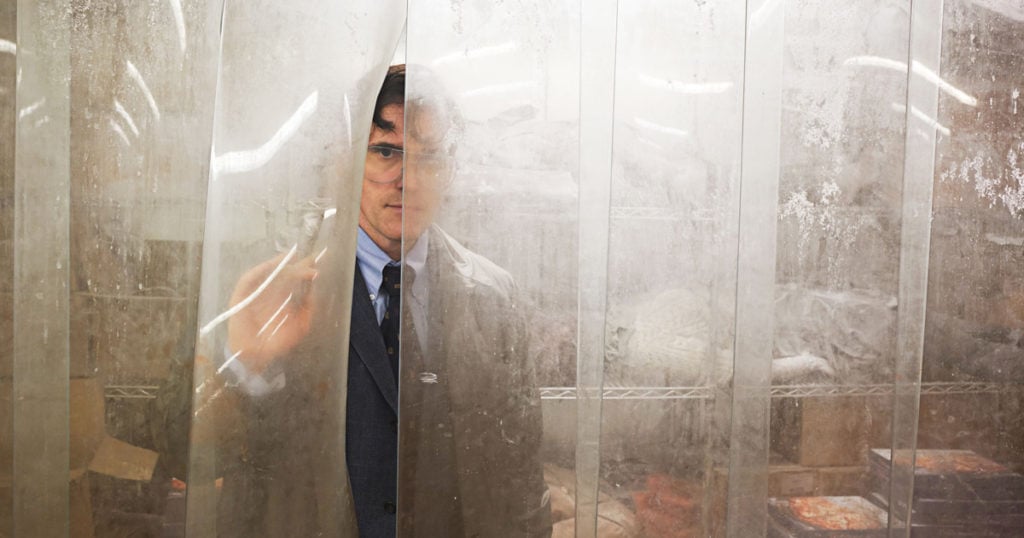 Jack hosts a hideous museum of grotesquery in a rented walk-in freezer, where his victims are displayed on shelves for him to admire.

You see, Jack (who also goes by the moniker “Mr. Sophistication”) sees himself as something of an artist. Every murder is a work of art to him, and he seals his finished subjects in a walk-in freezer to make sure he can return to savor them whenever he wants. He also poses them for grotesque photo shoots, even implementing taxidermy tricks to change their facial expressions and taking trophy shots like a hunter.

Make no mistake, this is all part of the point that von Trier is making with this devastating film, and whether you can handle this level of bleakness from one of your own species will be a major determining factor as to whether you see The House That Jack Built as a titanic, visionary endeavor of unflinching nihilism, or a masturbatory series of Von Trier’s visual essays. Hell, maybe you’ll see it as both. 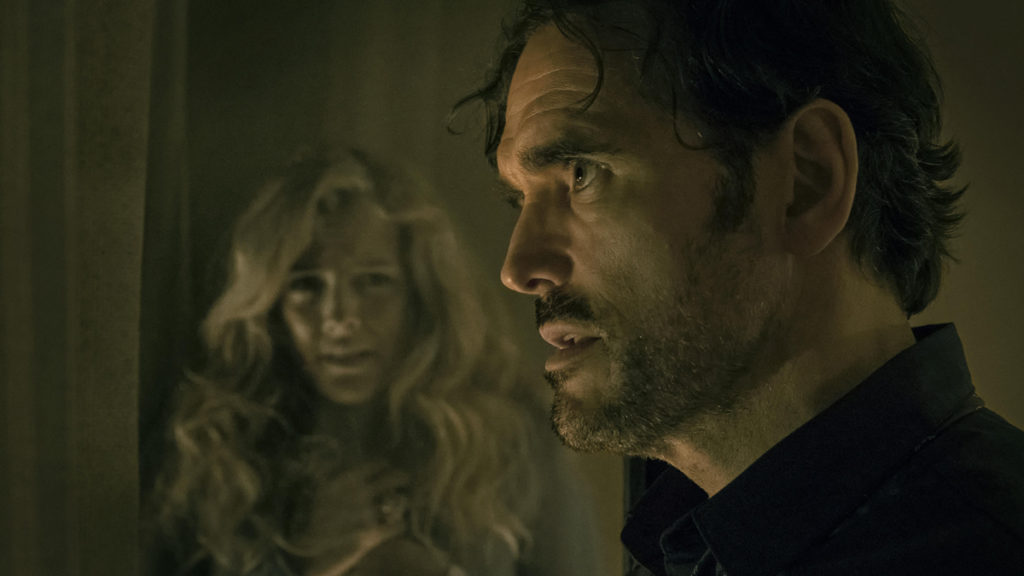 Von Trier shows off his bleak vision of the world in a scene that sees Jack murdering his girlfriend.

This film is essentially Lars von Trier wading into an abyss of his own making with each passing frame, a notion that is cemented completely by a montage of his past works that appears in the last leg of the film. By the time you’ve finished wandering through this purgatory of death and despair with the mad Dane, you’re going to be well into that abyss with him.

Either way, The House That Jack Built is utterly unlike anything you’ve seen this year, or probably any year, and for that reason alone, it’s worth seeing if you’ve got the stomach for it. The rest you’ll have to decide for yourself after the credits roll — that is, if you make it that far.

After a brief limited run in theaters, The House That Jack Built is now available in R-rated and uncut editions on VOD services, including PSN.