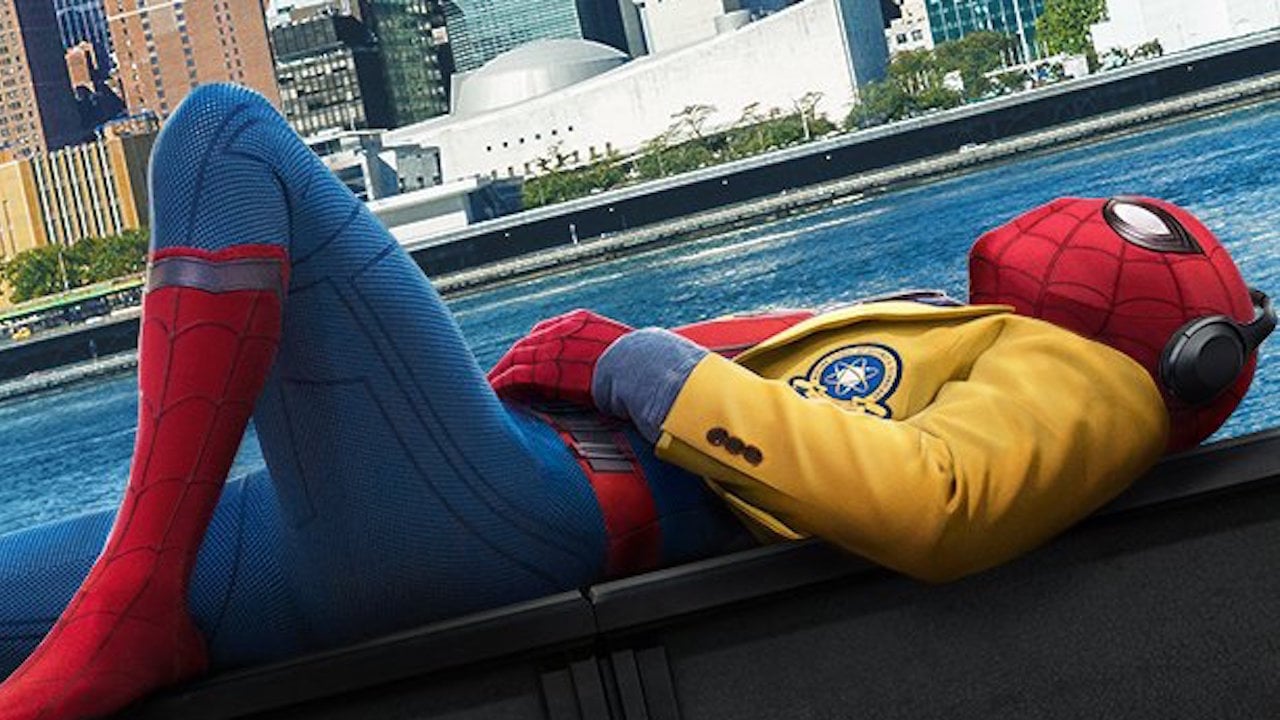 Spider-Man: Homecoming Grows Up Too Fast

Too eager to join the big boy heroes, Spider-Man: Homecoming sacrifices its chance at youthful exploration to join the Marvel work force.

There’s something to be said for letting kids be kids; we only get one real chance at those formative years where stupid impulse decisions and puppy love reign, and there will be plenty of time for the monotonous grind of adulthood responsibility later. Stories take time too, but for whatever reason, Marvel Studios has decided to rush the maturation process with their latest franchise launch (or re-launch, depending on how you look at it), desperately wanting their poster boy to hang with the established grownups now instead of in a sequel or two, and the result is pretty much the messy roller coaster ride one would expect when forcing what should come naturally. While packed full of typical superhero entertainment, Spider-Man: Homecoming doesn’t get enough time in the sac, and as such misses out on developing the feelings that should accompany the fun.

The hurry begins with an opening sequence that hits the ground running and never looks back, acting more like the next episode in a TV series that caters to loyal fans more than confused newcomers. Those who have boned up on their MCU plot points will be able to orient themselves fairly quickly, but others might be left in the dust. The basics involve the web-slinger’s alter ego, Peter Parker, now under the tutelage of obvious role model Tony Stark (aka Iron Man), who has given the enthusiastic lad an awesome suit full of awesome features that make everything awesome. Peter desperately wants to prove himself to one of the most destructive forces in the history of mankind, impatient that he is treated like the junior he is, and so sets out to fight neighborhood crime in an effort to induce the call to action from the Avengers that he yearns for. A bad guy in a bird suit shows up, doing bad stuff that involves some material from one of the Marvel films I can’t remember, and so a semblance of a plot is set in motion. Meanwhile, Peter goes to high school! And he sort of gets picked on by bullies! And there’s a girl he likes! And he has a hot aunt! 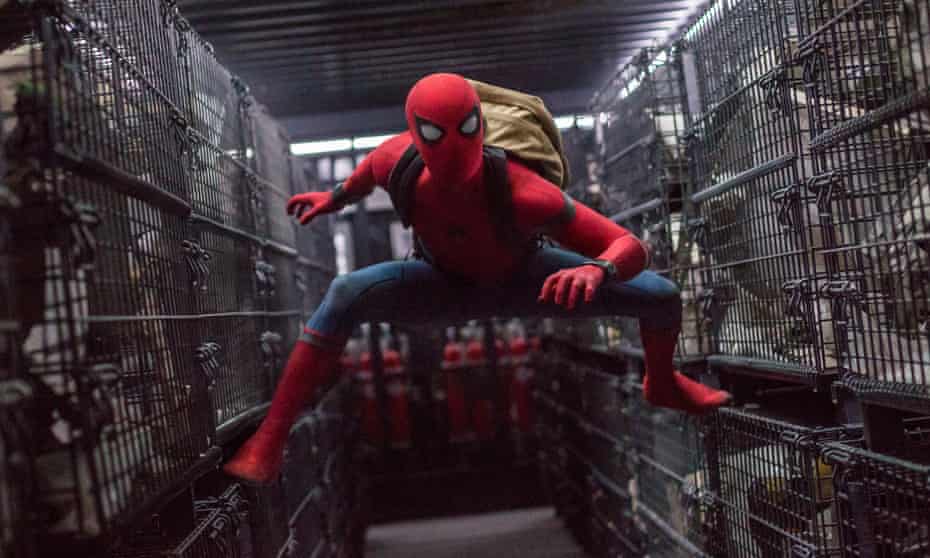 Even with all that potential teenage drama material to be mined though, the story still treats school like just a drag, as Spider-Man: Homecoming plays hooky a lot. Though many of the traditional ingredients are there (a geeky best friend, popularity cliques, teachers who just don’t understand anymore what it’s like to be so damn awesome), the movie doesn’t really linger on any of this, so bored by class that the burden of doing homework while moonlighting as hero never once comes into play. Peter couldn’t care less about learning (though one wonders how he got so knowledgeable in the first place then), but while that’s probably how the average teen would also feel under such circumstances, watching the average teen for two hours can be an exercise in patience. There’s little real longing in Peter’s romantic intentions other than surface attraction, and the supposed deep bonds of friendship extend on screen only as far as an overly-complicated secret handshake allows; all the shallowness of the quad is on display, brimming with outward assurance but underneath the surface lacking any true confidence. Homecoming is putting on an act, like that annoying student who is too mature for their peers, itching to be around those mature college men and women that will truly appreciate the intellect required for snarky quips, the thrill of swinging through the air, and the kind of reckless destruction superheroes sometimes pretend to feel bad about, but never really do.

In addition to its truancy, Spider-Man: Homecoming also stays out way past curfew, so don’t expect much quality family time either. Instead of helping keep the ever-soaring Spidey at least somewhat grounded, Aunt May’s defining traits are her looks and her unexplained concern about her precocious nephew (the writers – all six of them (!) – apparently assume that everyone knows about Uncle Ben already). The two don’t ever converse like characters who have lived and grown together; there’s no love on display, no tenderness, no quiet moments – just some comedy bits that give Marisa Tomei a chance to act like the sort of “cool” parent who might buy their kid weed before Peter rushes off again to whatever whim strikes his fancy, be it a dastardly crime that needs stopping or…no, that’s pretty much it. Deep. He’s never really in need of guidance, never crumbles under the weight of it all; this Parker can handle stuff on his own, no problemo. The lack of any real pressure means his relatability (traditionally one of the best aspects of the character) is limited, and meaningful stakes are slung out the window. 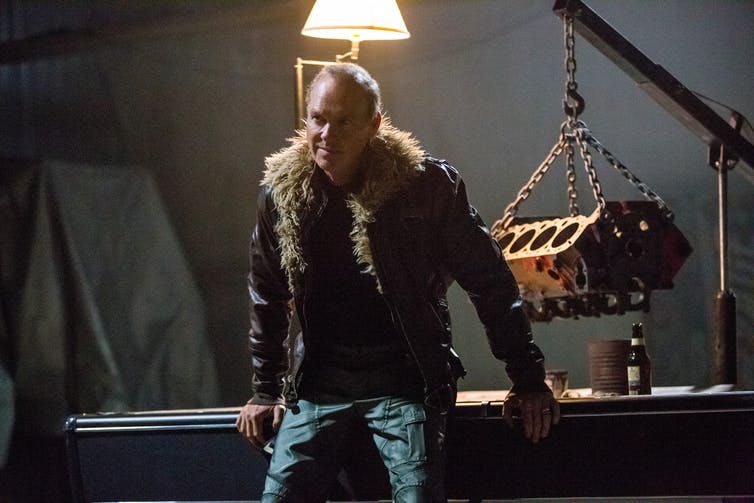 And so, with nothing meaty to latch onto, all that’s left is the nonstop fluff, a wispy cloud of smoke where a story used to be, and in this aspect, Spider-Man: Homecoming actually does fare pretty well. Marvel has mainstream oddball humor down to a science, and they can topple building like no one’s business, so though nothing here stands out from the pack in any meaningful way, the zippy ride is a pleasant one regardless. The action moves quickly from set-piece to set-piece, competent and as thrilling as any CGI characters fighting other CGI characters can be, and little moments that serve no purpose other than to elicit a giggle are enjoyable in their weirdness. Tom Holland gives both Spider-Man and Peter Parker his all, and his nearly breathless exuberance is endearing. It’s nice to see a Spider-Man so excited about his new role in the world, even if his joy is often expressed through a multitude of awkward exclamations dreamed up by the un-hip screenplay committee (not everything is awesome, guys). While Homecoming races ahead with the rest of the cast, their hands safely at ten and two, eager to rendezvous with the rest of the Marvel Cinematic Universe, Holland is doing donuts in the parking lot, clinging to vibrant youth.

The summer of ’17 will soon be just a memory, however. In the end, Spider-Man: Homecoming flaunts the kind of illogical double standards that only adults like Tony Stark can get away with when wrapping things up, signaling the conclusion of its maturity. Like the kid at its center, the movie is in a hurry to grow up. Unfortunately that means that discovering what kind of person Peter Parker is and what makes his place in the world unique has been sacrificed so that the prodigy can reach his true potential as a productive earner on the Marvel work force. You’re only young once, at least until the next reboot.

Facing the Music in ‘Baby Driver’