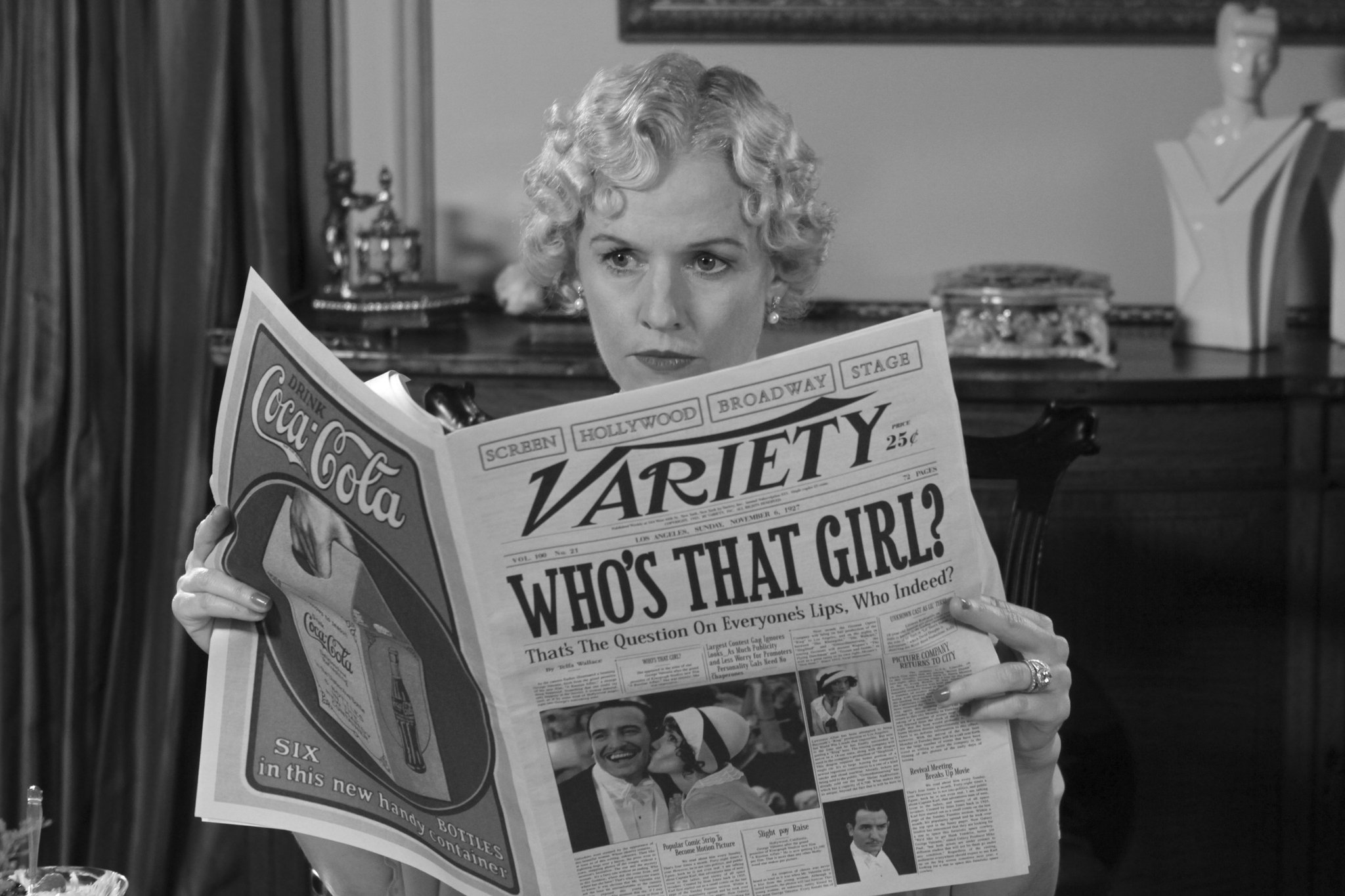 Contrary to an assertion prominent in its mammoth publicity machine, The Artist is not a silent film. There are actually some notable examples of diegetic sound within it, and aside from being in black and white, though originally filmed in colour, the film is not shot like a 1920s picture. Unlike the likes of Canadian filmmaker Guy Maddin’s 2006 film Brand Upon the Brain, there isn’t an attempt to directly replicate silent cinema so as to seem almost indistinguishable from that era’s films. What The Artist actually presents is a tale of a silent film star during the emergence and growth of early sound cinema, using the most prominent characteristic of that brand of film-making, the silence, to depict the world view and state of mind of its main character.

The silent approach may initially seem like a mere gimmick, and this is an impression admittedly created in the film’s opening stretch set at a film premiere, though this may be, in part, related to the sequence’s distractingly strong similarities to Singin’ in the Rain’s opening scenes, a film that covers some similar material. (As has been noted by many, The Artist’s star Jean Dujardin, when in happy and smiling mode, also happens to bare a very strong physical resemblance to Gene Kelly.) Once our protagonists’ initial meeting is out of the way, the film settles into a much more consistent, gradually appealing groove. Dujardin is George Valentin, a star in the vein of Douglas Fairbanks who performs in numerous types of adventure films for John Goodman’s studio head. Bérénice Bejo’s Peppy Miller is an aspiring actress who forms a friendship with Valentin; her gradual rise through the industry, as is so often the case in these sorts of stories, coincides with Valentin’s downfall as a star.

Opening in 1927, 1929 in the film’s narrative sees Goodman’s character promoting the importance of introducing sound pictures to his studio’s output. While initially a little jarring considering The Jazz Singer’s launch of sound came two years before when The Artist actually starts, it doesn’t seem unreasonable to think that many studios stayed away from sound for a while before it proved fruitful for others. The delay also allows for Valentin’s attempt at retaining the tradition of the silent adventure film, self-funded after he is fired by the studio in favour of Peppy and other sound cinema talent, to coincide with the stock market crash, and fuel deterioration into alcoholism and nervous breakdowns. The plague of the dawn of sound on Valentin is portrayed cinematically by instances of heightened diegetic sounds, of things like laughter and objects bumping into each other, suddenly intruding into the film, albeit through the context of Valentin’s nightmares. Diegetic sound makes its entrance to the film outside of a threatening context in the film’s climax, when Valentin makes an apparent comeback in his sound film debut, a musical project concocted with Peppy. Once the silent actor makes the transition successfully, the silence ends.

Alongside these uses of sound design, director Michel Hazanavicius also draws on other aspects of later cinematic history and language to heighten this story. A miniature version of one of Valentin’s own characters haunts him during a drinking binge thanks to contemporary special effects, an extract of Bernard Herrmann’s famous score for Vertigo is incorporated in the film’s final act, Malcolm McDowell cameos while looking a lot like Erich von Stroheim’s butler from Sunset Boulevard, a scene between Valentin and his estranged wife is very reminiscent of Citizen Kane, and there are allusions to the screwball comedy genre and various 1930s musicals. It also has an especially knowing bit of darkly humorous fun with a sound effect inter-title card in one scene. For all its evident love of populist cinematic history, one might wonder why some of the more interesting directors and trends of silent cinema do not get a nod in the narrative. As nice as any recognition of the likes of F.W. Murnau and Fritz Lang might have been, The Artist’s story is concerned with a very specific brand of silent cinema in the form of Valentin’s adventure pictures, a reflection of the system of the time where certain studios would be associated with and primarily distribute the same sort of specific genre output. As such, incorporating narrative references to these filmmakers would probably seem superfluous; they might also seem ill-fitting in Hazanavicius’ deliberately chosen melodrama approach.

Attempts to recreate specific eras of filmmaking with a particular novelty appeal have proven especially dissatisfying in recent years. It is satisfying that The Artist works instead as an effective homage to, rather than a potentially irritating aping of, a particular brand of cinema, telling a story about it through the incorporation of one of its major attributes. It is not a great film, but it is a good, enjoyable melodrama anchored by magnetic performances and a playful style that is increasingly charming.