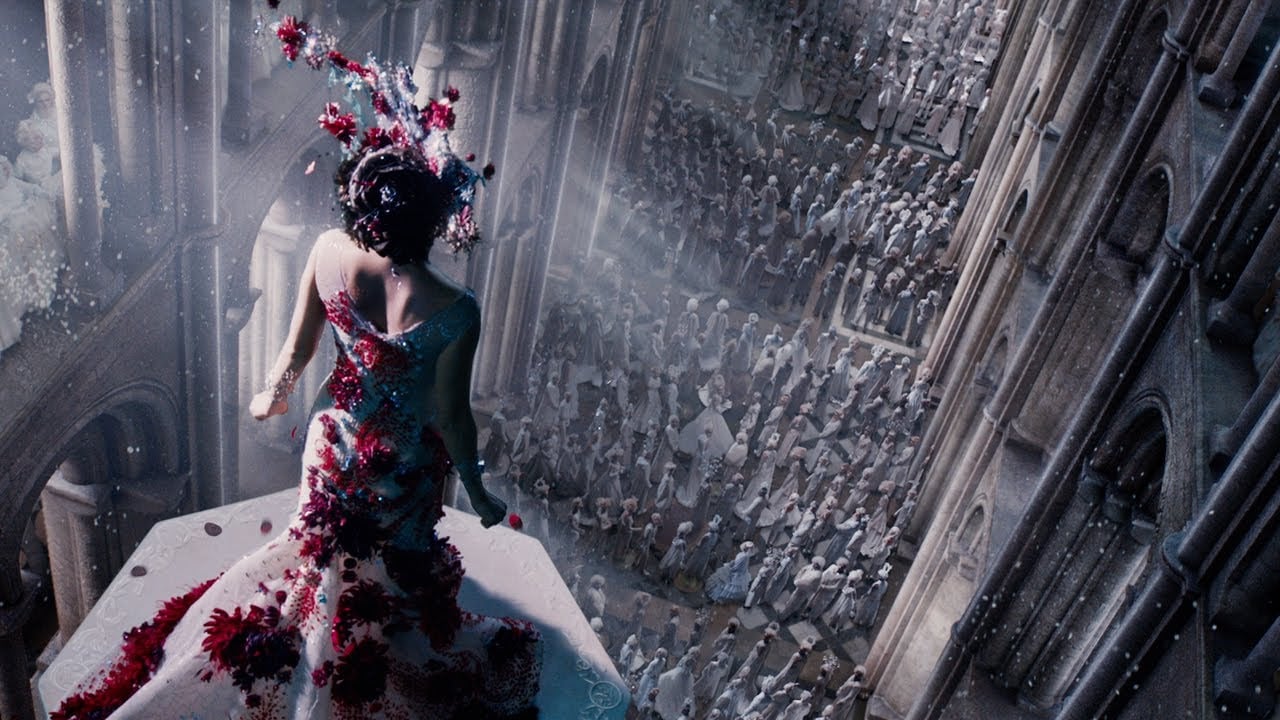 That sound you’re hearing is a massive sigh of relief from David Lynch.  He no longer holds the dubious distinction of producing the most expensive B-movie in the history of Hollywood.  That honor went to The Wachowskis, whose Jupiter Ascending officially displaced Dune at the top (or bottom) of the heap when it was released in 2015.  This isn’t necessarily a bad thing, however.  Jupiter Ascending not only looks spectacular, but it’s also a laugh riot.  Ridiculous dialogue, hammy performances, and enough mythology to baffle Zeus make this disaster a must-see for all lovers of cheese.

In the pantheon of helpless heroines, Jupiter Jones (Mila Kunis) is arguably the most helpless of them all.  She literally spends two hours being rescued by Caine Wise (Channing Tatum), a mutant ‘splice’ who is part human, part wolf, and all stud.  He’s also got a gnarly pair of gravity boots that make him look like a psychedelic speed skater as he glides through the air.  Anyway, Jupiter lives in Chicago with her wacky Russian family that specializes in busting her chops.  She cleans toilets and dreams of meeting someone she can truly love.  Yeah, she’s basically Cinderella with better cleaning chemicals.

Luckily, Jupiter won the genetic jackpot.  You see, she’s heiress to the throne of the entire universe.  And you thought your leader was bad!  Descended from the House of Abrasax, Jupiter need only claim her title and she becomes the universe’s head honcho.  Not so fast, nepotism breath!  To claim the throne, she must survive assassination attempts and coercion from her covetous relatives.  You’ve got the vapid daughter Kalique (Tuppence Middleton), the unctuous brother Titus (Douglas Booth), and the power-mad brother Balem (Eddie Redmayne).  It’s safe to say that Christmas morning would be a hoot in this household.  Each wants Jupiter for their own nefarious purposes, which makes it Caine’s job to keep saving her dumb ass.

It must be stated that Jupiter Ascending is absolutely gorgeous.  The Wachowskis have crafted a distinctive world where organic spaceships mutate in mid-air and dynamic CGI realms compete for visual supremacy.  Their combat chops are sharper than ever, with numerous hand-to-hand sessions that are choreography to perfection, as well as periodic space battles that never fail to impress.  There is a startling level of detail in all of the landscapes, where you find your eyes wandering to discover each little nuance.  Clearly, they have fussed over all the technical aspects of their filmmaking, which makes this cacophonous mess all the more endearing.

As screenwriters, The Wachowskis take a ‘more is more’ approach, cramming in so much backstory and mythology that it’s impossible not to think of Dune while you’re watching.  They’re clearly trying to build the foundation for a future franchise, but this nonsense couldn’t support a thatched hut, let alone a second movie.  The dialogue, too, is howlingly bad.  It’s amazing the actors can recite these doozies without cracking a smile.  Listening to an earnest Sean Bean (as Caine’s mentor, Stinger) extol the virtues of bees is something to behold.  “Bees are genetically disposed to recognize royalty.”  Indeed, Sean.  Indeed.

The primary problem with the script, however, is that Jupiter Jones just isn’t very interesting.  In fact, she’s downright boring.  She’s got no game whatsoever; no combat skills or special abilities, and her nondescript personality leaves you wondering what exactly Caine sees in her.  This completely neutralizes the performance of Kunis, who does her wispy-voiced best to seem glamorous and interesting.  Her job is to blunder into obvious traps set by the siblings, and then to stall long enough to allow Caine and his pyrotechnic dreamcoat to make a dramatic entrance.  It makes for an extremely repetitive and episodic plot that threatens to bog down at every turn.

Luckily, we have the scenery-chewing performance of Eddie Redmayne to hold our interest.  It’s difficult to fathom how Redmayne’s computerized voice as Hawking in The Theory of Everything could be less-stylized and easier to understand than his affection in Jupiter Ascending.  He sounds like a drunken 100-year-old man.  It’s a mesmerizing performance that is all too abbreviated.  In fact, the feud between the three pampered siblings is far more interesting than anything Jupiter Jones has going on.

Jupiter Ascending is a film that requires the right mental attitude to enjoy.  If you try to take this stuff seriously, with its platitudes about appreciating your life or all the handwringing over the fate of galaxies, you’ll be bored within 20 minutes.  If, however, you accept this movie for what it truly is… a bloated space opera drowning in its own ambition… you can have a blast going down with the ship.  A troubled production and numerous release date changes might sink Jupiter before it ever ascends, but there is something to be said for artistic self-indulgence.  If you are going to fail, fail spectacularly.