The winning entry of the 2007 Grindhouse faux Trailer Contest and YouTube sensation, Hobo With A Shotgun grows into a full-length feature and a winning contribution to exploitation cinema. A Hobo (Rutger Hauer) arrives in Scum Town with hopes of a better life, only to discover the town is overridden in crime, the police force has turned to the wrong side of the law, and a local crime boss terrorizes any citizen who stands in their way.

First-time feature director Jason Eisener and writer John Davies deliver an entertaining, comically violent throwback to low budget 70’s and 80’s genre movies. The skeleton here is that of an urban western, in which a drifter with dreams of a better life is caught in a lawless town, pushed a little too far, and as a result delivers justice, one shell at a time. Hobo looks and feels like a long lost relative to exploitation features of the Canadian Tax Shelter films from decades past. Working from a simple idea, and constantly delivering on its premise, Hobo’s success can be attributed to the simple fact that the filmmakers rely on building a story first, above the action. Unlike most grindhouse films, the movie doesn’t rely on shock value. Hobo has heart, as does it’s titular character, and in an era of too much blood-for-blood’s-sake, Hobo understands that character is action, and stakes are needed. 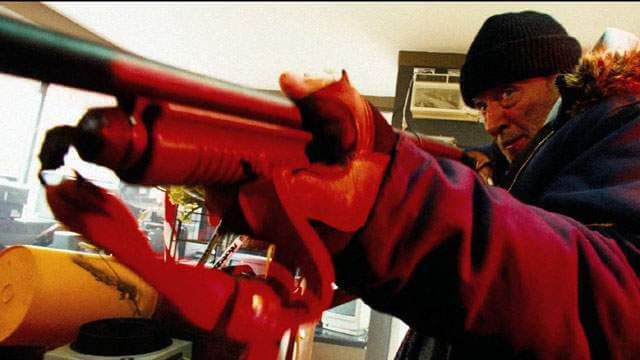 Hobo wears its influences on its sleeve, from the midnight movie screenings in 70’s New York to the video nasties of the 80’s. Davies’ screenplay overflows with great dialogue like “I’m gonna wash this blood off with your blood,” while a newspaper’s headline reads, “HOBO STOPS BEGGING, DEMANDS CHANGE.”

Eisener, who obviously grew up watching low-budget exploitation flicks, is clearly a visionary director with a true passion for the genre. Here he recreates their style with an impressive attention to detail. Photographed with the revolutionary Red Mysterium-X camera system, he and cinematographer Karim Hussain shot the film in vivid Technicolor. The look of the film draws on many sources; one can quickly spot the influence of such films as Vice Squad and The Warriors. Eisener uses a wide range of color gels that echoes the best of Italian exploitation, most notably that of director Dario Argento. The camera work is constantly moving and zooming, driving the action forward while creating an intense and thrilling experience. The musical score, composed by four individuals, is another major reason the film is such a success. A vaguely ’80s-ish sound, at times similar to John Carpenter’s scores, while at other times reminiscent of scores from classic Giallo films.

Rutger Hauer, best known for his roles in Blade Runner and many films by director Paul Verhoeven, is pitch perfect. The key is to play it with a straight face, and luckily he does. He knows the film is walking a fine line between satire and homage, but he’s never winking at the audience. Hauer brings gravitas to his role of an unnamed hobo (think Sergio Leone’s Man With No Name trilogy). His bright blue eyes and Hauer’s particular brand of intensity all serve him up as the perfect straight-man in Scumtown. He keeps the film grounded, and more importantly provides a much needed soft, loving center.

In typically grindhouse fashion, the carnage of the film only increases as the running time progresses. Crimes are depicted unrealistically and in over-the-top fashion, but the violence never lacks imagination, and even better, Eisener and his crew rely on practical effects as opposed to CGI.

Hobo was destined for midnight-movie success and will outrage the mainstream due to its gleeful excess of sex and violence, not to mention a school bus full of children burnt alive to the sounds of “Disco Inferno.” But again, Eisner is not shocking for the sake of shock. Even in this already controversial moment, the scene has reason to exist. It carries the story forward and serves a purpose. Hobo is a risky film and clearly not for everyone, but by the time “The Plague” enters (two characters similar to the villains in The Road Warrior), fans of exploitation cinema like myself, will find themselves smiling, knowing that exploitation cinema is still very much alive. And while it delivers up the requisite amounts of violence and nudity to satisfy the requirements of the genre, it also has a touch of social commentary.

‘The Monster’ is so close to greatness, and yet so far