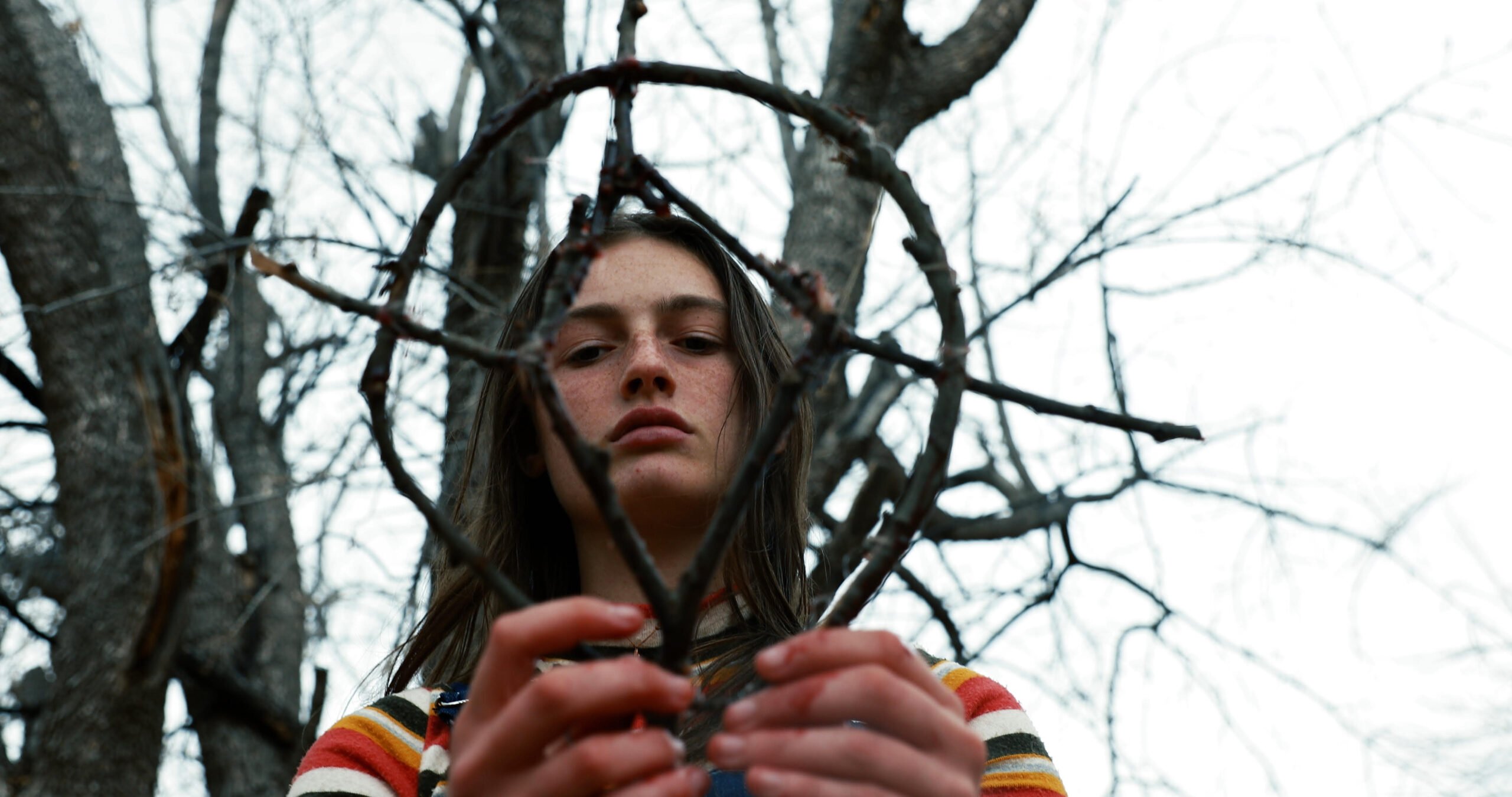 Hellbender is one of the most fascinating coming-of-age films in recent memory. From the Adams Family (Zelda Adams, Toby Poser, and John Adams, who all write, direct, and co-star in the film) comes a visually inventive and poignant take on the occult, specifically aiming its sights on witchcraft, parenting, and the better version of ourselves we see in others. From its opening moments to its final bow, Hellbender is funny, endearing, trippy, and above all else: metal to its core.

One element that makes Hellbender feel so fresh and exciting is how its narrative plays out as the coming of age of a witch. Izzy (Zelda Adams) has been homeschooled her entire life, spending every waking moment with her mother (Toby Poser) and every other moment roaming their large private property in the middle of the woods. Once her mother realizes she can no longer hide her family’s history from Izzy, she begins to teach her the ways of witchcraft – how to be a Hellbender.

The spark of the film is its core relationship and the idea of trying to guide Izzy to be better than the other Hellbenders. They’re powerful beings that can easily have all of that power go right to their head, which usually ends up being the case. But her mother got out of that cycle and now spends every moment trying to keep her daughter on the same path as her. They bond over their love for art and music, even fronting their own two-piece rock band aptly named H6LLB6ND6R (whose music is written and performed by the Adams Family). It’s a delightful relationship that slowly gets torn down to its base ingredients through Izzy’s mother’s subsequent teaching of witchcraft.

Often that teaching boils down to what elements of nature can be broken down to create an effect – whether it be hunting prey, levitating, or climbing. The whole film is rooted in earthly tones and a dependence on nature. In a beautiful moment between Izzy and her Mom, the two collect sprigs, mushrooms, and berries and mix them together in their palms – no mortar and pestle or comically large cauldrons here. Even at home, they eat plants, fruit, and vegetables off a plate with no utensils. It’s a minimal, naturalist lifestyle that feeds into every facet of the way Hellbender is presented.

Visually, almost every instance of witchcraft is hypnotic. By the end, you’re in a trance-like state as the film dives deeper into Izzy’s potential and the film feels truly metaphysical. That’s largely due to the atmosphere every aesthetic choice builds, from the mesmerizing visual effects to the grounded production design, and the film’s entrancing score. Even when the film suddenly shirks its meditative state and becomes momentarily aggressive, it’s like the crest of a wave crashing down before building back up to another moment of exclamation.

Hellbender really feels like a small group of people coming together and creating something poignant and captivating. Even with its very DIY-attitude, it fits so well with the narrative that the only minor blemishes can be easily overlooked for what it excels in – really, there’s only one sticking point and that’s some of the performances outside of the two leads. If the film didn’t feel slightly amateurish before, once it introduces other characters it is evident that this is a small community of people who just love filmmaking. Then the credits roll and you truly see how small it is – making it feel like a miracle that the film exists in such a polished state in almost every respect.

Even with those less-than-great performances, the movie is centered on and given so much emotional resonance because of both Zelda Adams’ and Toby Poser’s performances.  It’s a delicately told story that remains emotionally resonant by its end, largely due to how strong their chemistry is. Zelda, in particular, shines as the sheltered teenager wrestling with the malevolent power inside – and the society she desperately wants to find a community within. That tension between Izzy and her mother gives both actors so much canvas to work on that results in a powerful and dominating presence for both.

If the Adams Family wasn’t on your radar before this film from their work on The Deeper You Dig, they will be now. There are so many inspired moments in Hellbender that left me in absolute awe. The Adams Family has such a unique, singular voice that aches through their work and Hellbender benefits from it immensely. Every element from the familial to the occult works in tandem with each other to create a spellbinding work of horror that is revelatory.

What happened at the end of The Green Knight?