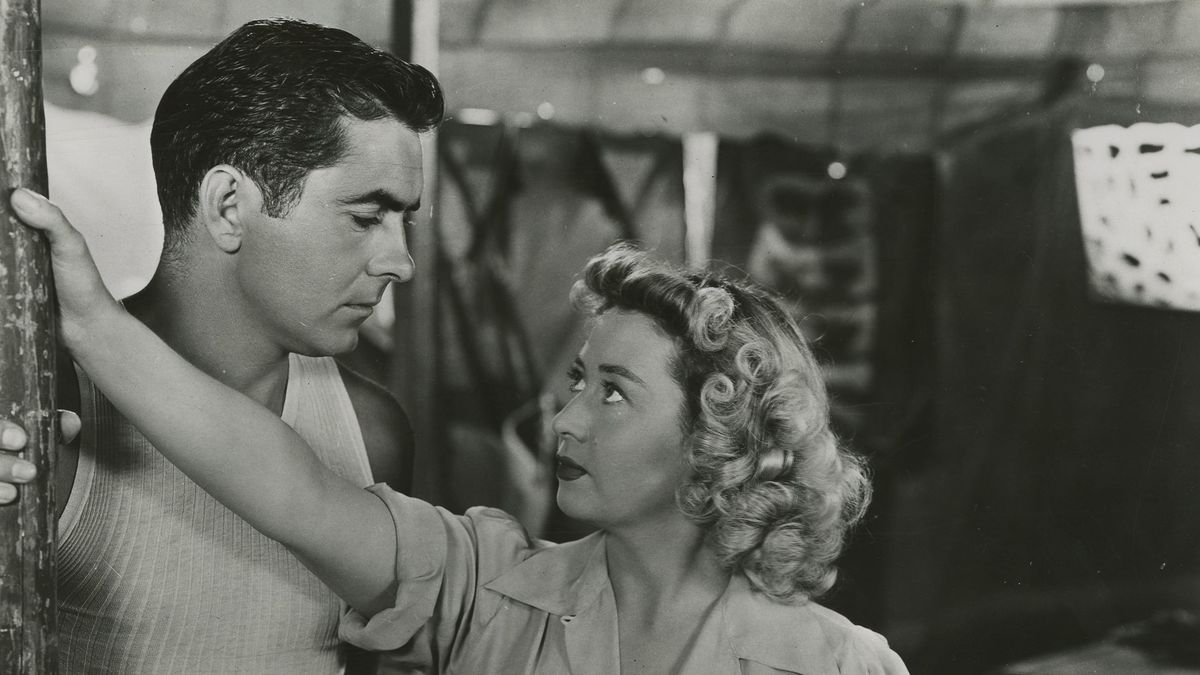 Who can tell when they are being conned? Or lied to for that matter? Some people are blessed (or cursed) with a potentially dangerous gift, that of being able to fool their way into earning other people’s confidence. It is a perverse talent, to say the least, a double-edged sword. When caught in a rut, the ability to smooth talk one’s way to calmer shores is commendable, but when the same talents are applied by someone with far fewer moral scruples, then the consequences may ultimately prove painful for both the con victim and the artist. Nightmare Alley, directed by Edmund Goulding, is a bit of an anomaly within film noir for its setting and the sort of protagonist the story evolves around. In fact, the case can be made that he is more antagonist than the protagonist.

Stanton Carlisle (Tyrone Power) works his tail off as the member of a travelling carnival where he and his colleagues Zeena (Joan Blondell), Molly (Coleen Gray), and Pete (Ian Keith) among others perform acts of either visual or psychedelic splendor in front of curious commoners. Stanton is very happy with his lot in life even though it is far from a career that will ever lead him to significant heights in society. Opportunity beckons when he learns of how his friend and mentor Zeena the ‘psychic’ and her hubby Ian used to earn big bucks in their act many years ago, using special speech codes to perform their act. Stanton snatches said window of opportunity by slowly, inexorably extracting that very code from Zeena, eventually leaving his employer for fame and fortune. As more money rolls in and his sense of pride mushrooms, it is not only willing audiences who are being conned through performances but the few people who care for him as well.

Nightmare Alley is unlike most other movies within the genre. There are no gangsters, no private eyes, no murders, no heists, nor one female character that definitively fits the mold of ‘femme fatale.’ Most of the surface-level, cosmetic qualities of noir that many casual fans associate with the movement are entirely absent. The ‘noir’ elements of Edmund Goulding’s picture are those which cannot be immediately spotted by the naked eye: the oppressively bleak thematic core and the morally conflicted central figure. After all, how many of such stories take place wholly within the domain of showmanship and carnival acts?

More to the point, Nightmare Alley features one of the least amiable protagonists ever, a man whose rise to stardom and fall into the abyss is entirely of his own doing. He is an individual who, unlike in some other films that tread similar narrative patterns, is ultimately undone less by poor luck or external forces beyond his control and far more by his own obsession of wanting to pull off grander performances, incurring increasing risks at every turn until he barks up the wrong tree. To argue that Stanton is of poor moral standing would be putting it mildly. His determination to con as many people as he can, preying on other’s sensitivities makes him downright risible. Few, if any, will cheer the character on as he plays a countless number of people for fools, occasionally when trying to state his case as to why he does it to people who have already been duped into believing he loves them. In truth, Stanton never expresses genuine love for anyone in the entire film and instead taps into their weak points for further gain. People like Zeena, Molly and psychoanalyst Lilith Ritter (Helen Walker) are no more than pawns to be selfishly used and abused.

Playing such as role is a tall challenge for any actor, but the casting of Tyrone Power is certainly unique. Power had earned his reputation as a leading man predominantly through roles in romance and adventure films. He deliberately wanted to challenge himself and therefore, much like how in the film Stanton pounces on the chance to ditch his carnival cohorts in search of wealth, relished the chance to play such a repulsive character. Power was without question a charismatic actor and brings to the role a vital strength, his every inflection and intonation exuding confidence of self and, yes, a soothing, welcoming feeling that would win over just about anyone. The best scenes arrive in the second half of the film after Stanton and Molly (with whom he has left the carnival and married) have made a name for themselves when an increasingly obvious sense of cockiness sets itself in. Belief in oneself is one thing, an important one at that, but Stanton overdoes it, his hubris doing too much of the talking when he is challenged. There is a single element brought up which briefly suggests there still remains some humanistic qualities in his cold black heart, that being guilt over a previous crime he unwillingly committed. Even so, said guilt has metamorphosed into something monstrous.

While spotlight is very much on Power from start to finish, several other key casting choices prove welcome additions. Joan Blondell is heartbreaking as the woman who has already lost so much but continues to fight through her troubles day in and day out. She fully invests herself emotionally into the role, playing a good soul who has been burned more than once in her life yet will not quit on those she cares for, including her now utterly useless drunkard of a husband Pete. Helen Walker does not appear until at least the halfway mark of the story but she makes a tall impression in her limited screen time as a hard-edged, highly intelligent, and slightly greedy psychoanalyst who expresses simultaneous curiosity and disdain for Stanton. She is not fully on board with his methodology, yet when the possibility of assisting his career arises, resistance is great a challenge. Mike Mazurka, as Molly’s initial main squeeze, does what he does best as the physically imposing, jealous boyfriend who bristles at the thought of losing his girl to a young hotshot.

Nightmare Alley is not representative of what noir fans have come to expect. Apart from the completely different setting and premise, the main figure is as dislikable and untrustworthy as the worst of villains. Director Edmund Goulding and screenwriter Jules Furthman weave a slow character study surrounding an individual whose distasteful behind the scenes antics may even have some praying he learns his lesson in the worst way imaginable. For that reason, the film is not an easy or ‘fun’ watch. It places Man’s dark side in front of the mirror for viewers to observe for almost two hours. The image is not a pretty sight.

Behind Green Lights Goes The Route Of Comedy With Mixed Results