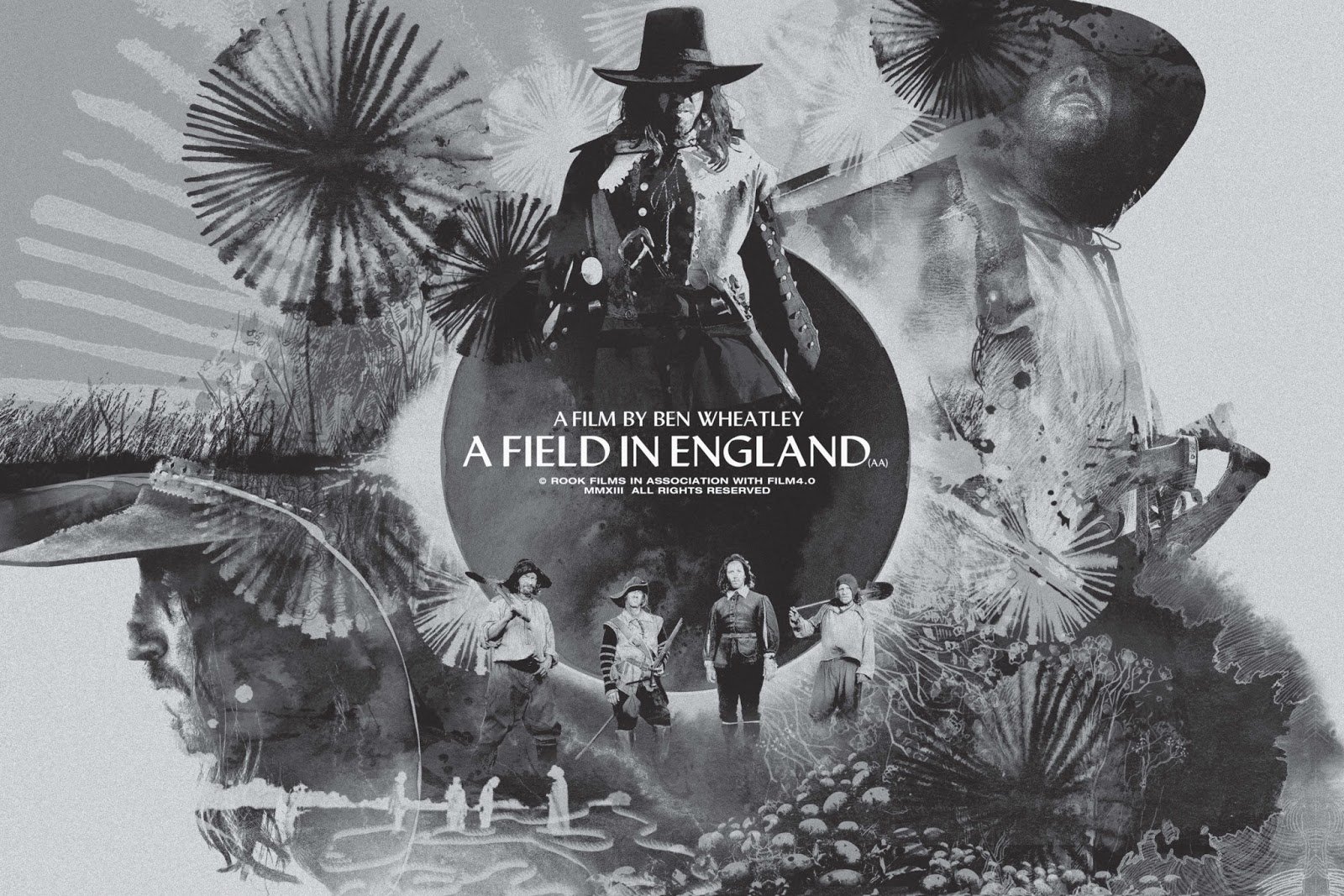 The increasingly prolific Ben Wheatley returned to screens a little under a year since his gallows-humor effigy Sightseers. Like a talent possessed, he seemed like a filmmaker anxious to capitalize on his growing cult recognition and harness larger and more challenging material, a successful strategy that has given him a growing fanbase on both sides of the pond. Experimental in form and delivery, his film A Field In England had a unique opening in the UK, leading with a modest run in specialist cinemas while being available via download, on-demand, and even airing on Film4, all on the same day. As the treasure of these spoils was assessed, the film was confidently tromping through festivals across Europe and now North America, featuring under the Vanguard strand of the Toronto International Film Festival.

A Field In England debouches its way into Wheatley’s pantheon as another flawed yet nebulously fascinating curiosity; like its revolutionary delivery model, it’s a potent harbinger of more successful things to come.

Shot in a moody monochrome black and white, the film may have the vague feel of an amateur dramatics society’s initial camera fumblings during its opening melee. Wheatley settles more confidently into his historical inauguration when the men verbally feint. Shivering alchemist’s assistant Whitehead (Reece Shearsmith) encounters two UK Civil War deserters, Jacob (Peter Ferdinando) and his friend (Richard Glover), who have fled to the titular grassy copse, and, in the finest British tradition of seething alcoholism, decide to co-operate to navigate the dangerous environment and find the nearest ale-house for a well-deserved pint. Their mutual antipathy turns mercenary when they encounter the sinister Irishman O′Neil (Michael Smiley), who exerts his charismatic authority over the group—it wouldn′t be a quintessentially English film if there wasn′t some acknowledgment of the ancient class system—and adopting the position of leader. He instructs the proles to search the field for an ancient, glittering treasure that will make them rich beyond their wildest dreams.

Among the mud-streaked actors, are faces familiar to cult comedy fans, such as Shearsmith of The League of Gentlemen and Smiley of Spaced and Wheatley’s own Kill List. Thus, the film’s cult cache seems assured. A Field in England continues a fine tradition of British oddball horror, trailing in the cornfield distressed wake of The Wicker Man, Blood On Satan′s Claw, or Witchfinder General, with a Middle England and Middle-Ages sense of humor that may be initially lost on international audiences. But, once the misty phantasmagoria sets in and the greedy men begin to scheme with avaricious intentions, the pan-global thirst for wealth should transcend cultural borders. You have to admire Wheatley’s instinctive deployment of the meager resources at his disposal: a bloody and heaving Civil War battle heard off-screen, distant groans and the grinding of halberds upon helms on the soundtrack, a corpse litters the ground here and there. This is just enough to build the chaotic environment before Wheatley builds to a faintly mesmerizing conclusion that will prompt future viewings and speculations, although he doesn’t lean too hard on his clear cinematic influences, Jodorowsky and Roeg.

A Field in England does feel like something of a placeholder rather than the breakthrough severity of Kill List, which roughly seized genre fans and critics by the back of the neck and urged them to drink deep of the abyss. But as another whip crack forward on a swiftly rising career, this film has deepened the adoration of his existing fans and gained a few indiscriminate new acolytes on its stumbling way.