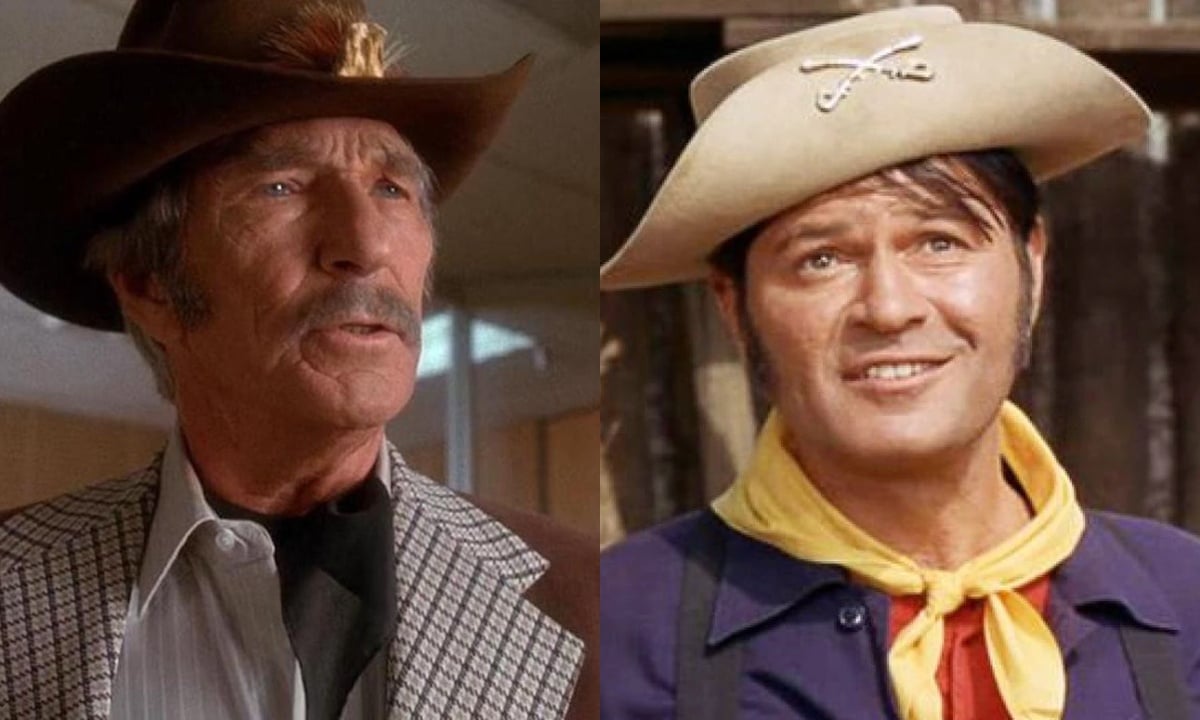 Years ago, I had bought a certain car and was telling a friend how I’d suddenly noticed how many cars like mine were on the road.  “They were always there,” my friend told me, “it’s just now that you have one you notice them.”

Actors can be like that.  A particular role makes such an impression, that you now realize they’ve actually been kicking around for a while, and then you start noticing them in older features and TV shows.  With that newly-acquired hindsight, you can actually appreciate the evolution of their career.

It’s something of a cosmic coincidence that L.Q. Jones passed away so soon after Bo Hopkins since it was their mutual appearance in Sam Peckinpah’s The Wild Bunch (1969) where I got that first, deep impression of both actors.  I hadn’t been aware they’d both been around for a while, although for Jones it was a lot longer amassing a lot more work than Hopkins.  When I looked Jones up on IMDB as research for this piece, I was stunned at the tonnage of work he’d piled up before Wild Bunch.  But, also with the benefit of that hindsight, I wasn’t surprised.

He has a small part in Anthony Mann’s often overlooked 1956 Korean War flick, Men in War.  Jones is just one member of Robert Ryan’s wandering platoon, and I don’t think he has more than a couple of lines of dialogue if that.  But there’s one scene I always remember where he’s tying a bandage on Ryan’s back so his men can see him in the dark as he makes a try at an enemy position on an occupied hill.  Jones comments on how it means the enemy will be able to see him as well.

It’s just one line, but there’s a shading he gives it, a kind of grim resignation where you can tell he thinks Ryan’s not coming down off that hill alive.

I mention this because at the time, Jones had only been appearing on screen for a year, and as far as I can tell, he had no formal training (he turned to acting influenced by his former college roommate, Fess Parker, the future TV star of Disney’s Davy Crockett and then later, Daniel Boone).  My point is Jones always had “it” and it’s what made him such a go-to supporting player on the big and little screen, particularly for Sam Peckinpah who used him five times.  According to IMDB, by the time he passed, Jones, who traded in his given name of Justus McQueen for the name of a character he played in an early gig, had run up 165 appearances on the big and little screen.

With his rangy physique and Texas drawl and a face that even in his younger days looked weather-beaten, he was frequently typed for Western- and rural-type characters (ironic that he rarely got to wear a suit considering he’d studied law in college), and often as villains which was a shame because he did show an enormous range from Good Guy (Clint Walker’s sidekick for a few episodes of Cheyenne) to Bad Guy (all of his Peckinpah roles), country rube (Peckinpah’s Ride the High Country [1962]) to rural shrewdie (a car dealer who is a closet gun runner in an ep of Columbo), comedy (couple of eps of The Dukes of Hazzard) to heavy drama (Casino [1996] where Martin Scorsese asked him to rework his dialogue so it would sound natural).

His choices for his characters weren’t random, and despite his lack of formal training, they weren’t gut instinct.  I’ve seen a number of interviews with Jones, especially about Peckinpah, and he was always impressively articulate (if often profane – Example, talking about Peckinpah:  “And as much as I think Sam’s a genius, I also think he’s a fucking idiot. But then, it takes a genius to fuck up in the idiotic ways he does”), insightful, and just pretty damned smart about his profession.  This is him talking about the many many many villains he’d played:

“Different parts call for different heavies. I have a certain presence. I play against that presence a lot of times…I’ve done 25, 30, 50 different types of heavies, a shade here, a shade there . . . it’s really hard to say what they’re looking for when they pick me. A lot of times your heavy is not that well presented in the script. Most times he’s too one-sided. So we look for things to bring to being a heavy: a certain softness; a vulnerability that makes him human; a quiet moment when he’s a screamer most of the time; a look; the way he dresses; the way he walks into a room.”

Watch his death scene in Ride the High Country:  slowly bleeding to death, alone on a windswept hillside, it’s hard not to feel a little something for a character that, until that point, has been a boorish Neanderthal looking forward to a connubial sharing of his brother’s new wife.  And then there’s his death scene in Peckinpah’s Pat Garrett & Billy the Kid (1973), as he has to face off with James Coburn’s Garrett with whom he’d once rode, half-dressed, his face still partially covered with shaving cream, going down tangled in a clothesline, giving Garrett a look of ain’t-this-a-helluva-note before he breathes his last.

My favorite story which illustrates his approach has to do with brilliant duet he had with another great character actor, Strother Martin, in The Wild Bunch:

“The understory, the backstory is what makes most really good pictures good.  The Wild Bunch is an action piece, and yet it’s character-driven.  So Strother and I…we decided to make (our characters) a little bit gay…and Sam went along with it.”

The two have a morbidly comic scene in a corpse-strewn street after the movie’s opening shootout as they fight for credit over the kills.  “Liar!” Martin yells at Jones, “Black liar!”

And then Jones puts on a puss like a hurt child.  “You shouldn’t talk to me like that,” he pouts.

Martin apologizes, gives him a friendly punch…and then the two gleefully begin to strip the dead.

I don’t know this for sure, but I suspect that in the latter part of his career he was getting cast because he carried so much cinema with him, like the way Tim Burton felt about Vincent Price, Joe Dante about Roger Corman favorite Dick Miller.  I have a sneaking suspicion that’s why cinema geek Scorsese used him in Casino, and maybe even why Lee Tamahori cast him in The Edge (1997) as the very picture of an I’ve-seen-it-all Alaskan outdoorsman.

At some point, \Jones started his own production company for which he produced and directed a couple of forgettable horror flicks, but he found a place on the cult film circuit directing an adaptation of Harlan Ellison’s black comic post-apocalyptic novella, A Boy and His Dog (1975).  The movie was widely panned at the time and a flop, and Ellison – whose script had to be finished by Jones and co-producer Alvy Moore when Ellison felt blocked – hated the movie’s closing line (no spoiler; you have to see it), but over the years the movie developed one of those “overlooked gem” kind of followings (I saw it on release and I thought it was a hoot!)

In a 2020 interview reflecting on his career, Jones told a story about Ben Johnson, with whom he worked several times on Peckinpah movies, the punchline being some little kid coming up to Johnson and saying, “How in the hell did you ever get to be a world’s champion?” (Johnson was a champion rodeo rider before getting into movies).  But Jones took it as his own humbling bit of counsel:

“So any time I got to thinking I was somebody, that’s what I said to myself:  how in the hell did you get to be this!”

It’s always a funny thing what can endear an actor to the public.  Sometimes it’s not a body of work, some stellar performance, some classic piece of celluloid.  For Larry Storch, it was oddly in a short-lived sitcom, F Troop, with Storch partnered with Forrest Tucker as two conniving noncoms in a Western cavalry troop of foul-ups.  F Troop didn’t have the suburban sophistication of The Dick Van Dyke Show, wasn’t particularly reflective of the times the way That Girl was.  It was silly, the jokes broad…kind of a Western McHale’s Navy.  Yet it’s clear from the obits that something about it, and Storch’s performance as “Who says I’m dumb?” Corporal Agarn stuck with a generation of TV viewers.

In a way, it’s a bit of a shame because – as is also clear from his obits – it eclipsed an impressive range of work.  He’d done Broadway to great reviews, had appeared in a number of movies, often displaying a flair for mimicking accents (my favorite, his Russian spy in Who Was That Lady? [1960] as he tries to question a drug-addled Tony Curtis), and it’s often forgotten that it was a decent hand at drama as well.

I remember even as a kid being struck by a guest appearance he did on a WW II action series, Garrison’s Guerillas, a The Dirty Dozen (1967) TV knock-off.  This was after F Troop had gone off the air, and all I knew of Storch at the time was his run on the sitcom.  All I remember about the episode is that he’s a convicted forger brought on for a special mission.  He runs off and is found praying in a church.  The leader of the group finds him and Storch confesses the story behind his conviction.  I don’t remember the story; I just remember Storch carrying it off so well that this 12-year-old was getting a little choked up…and also surprised that this was the same guy who’d been dimbulb Corporal Agarn.

But in a business that chews up so many talents, it’s an accomplishment to be remembered at all, and for that, Corporal Agarn, you’ve earned your salute.

The Spy Who Loved Me: Roger Moore’s Rough and Tough Bond