The internet has the potential to be an archive for a phenomenal amount of information and creativity from countless people who share their work. But it’s not an automatically foolproof archive. Take for instance the poignant short webcomic Anu-Anulan and Yir’s Daughter by Eisner-winning author-illustrator Emily Carroll, now missing from her website without comment.

It’s unfortunate, and raises questions. One possibility is that it no longer fit the tone of Carroll’s growing portfolio. She has always been renowned for her horror comics. Her chillingly imaginative His Face All Red put her on the digital map in 2010, grabbing the internet’s attention. She entered traditional publishing with her horror anthology Through the Woods and When I Arrived at the Castle. In contrast, Anu-Anulan and Yir’s Daughter doesn’t terrify; it doesn’t even creep you out a little. It sticks out of Carroll’s horror portfolio as an innocuous anomaly. Without it, her body of work becomes more apparent in its bloodcurdling intent.

But part of the unique appeal of Anu-Anulan and Yir’s Daughter stemmed from the fact that it was so different from the rest of Carroll’s work. It was fascinating to see her art in a softer context. Her line work soothed instead of horrified. This short webcomic was ultimately a charming love story with fairy tale overtones.

It starts with the goddess Anu-Anulan in love with the silver hair of a mortal woman, Yir’s daughter. Anu-Anulan shapeshifts into three different disguises — a crow, a child, and a warrior — to trick Yir’s daughter into giving up each braid of her hair. But when the goddess has them all, she realizes it wasn’t the hair she loved. Without a disguise and finally as herself, Anu-Anulan meets Yir’s daughter, whose name is Yorenn. The goddess shows Yorenn that she has made the moon out of her silver hair. In the end, the mortal woman reciprocates Anu-Anulan’s love, and they live a full life together.

Anu-Anulan and Yir’s Daughter had the rhythm, philosophy, logic, and language of a fairy tale. It even had repeating lines that were thematically reversed toward the end. But it was also a fairy tale that told a new story with nuance and deeper characterization. How the goddess realized her true feelings for Yorenn was approached with thoughtful and subtle execution, deftly moving from playful whimsy to a dawning self-awareness of a more down-to-earth love. There was a tender montage of the couple living a normal life, celebrating the small moments that build and maintain a relationship.

“I wanted to show that they ended up in love, but that love needed to include moments that were both mundane as well as passionate—and simply showing a panel of them old together at the end wasn’t enough,” Carroll told The Comics Journal in a 2011 interview when discussing Anu-Anulan and Yir’s Daughter. “And I also wanted to show that it’s not just a single sweeping romantic gesture that makes a love story, it’s also the everyday moments (like having a meal, or taking a walk, or just having a laugh together) that can mean just as much.”

Besides Carroll’s interesting discussion of Anu-Anulan and Yir’s Daughter in The Comics Journal, other snippets of it fortunately still exist. There are screenshots of some scenes on old blog posts that recommend it. It’s part of a TV Tropes page about Carroll, and it’s included in a scholarly article from the Journal of Multimodal Rhetorics. There’s even a YouTube video that almost preserves the comic in its entirety, only lacking the very last part. These traces are also a sign of the impact that Carroll’s fairy tale romance left behind, ranging from suggestions for a good story to academic study.

Although Carroll is a master at crafting horror in comics, she also produced one of the best love stories with Anu-Anulan and Yir’s Daughter. She packed so much meaningful storytelling and heartfelt emotion in a succinct and elegantly drawn tale. The whole thing felt like a snapshot of fairy tale logic meeting raw emotion, which then forged a new balance between each other. This short comic held the mythic quality of a goddess and a mortal falling in love, and then contrasted it with the domestic flow of their relationship in practice. Whether or not it will ever resurface in its original form, Anu-Anulan and Yir’s Daughter persists as a fond memory. 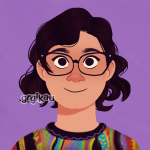