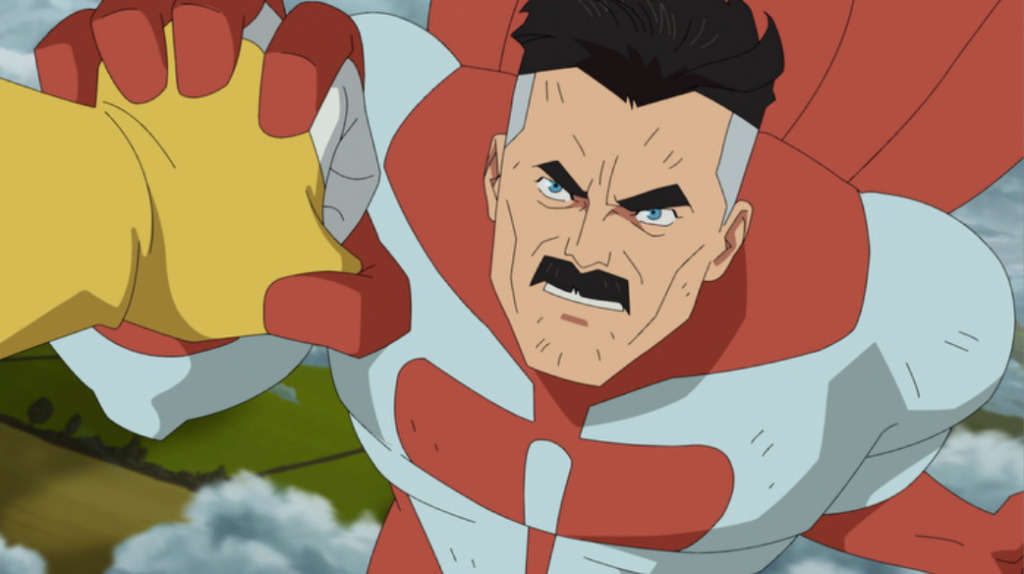 Invincible has finished out its triumphant first season with an episode that out-bloodies, out-disgusts, and out-nasties every episode that preceded it. An absolute bloodbath that crushes every notion we had of how far a show like this might go, “Where I Really Come From” sets a high new bar for the next season (which we finally have confirmation on, by the way).

Coming in hot off of last week’s cliffhanger ending, Invincible dives straight into the exposition in its finale, finally explaining what drove Omni Man to murder the Guardians of the Globe in the first episode. As many have fans have guessed, Omni Man’s true goal is to conquer Earth for the Viltrumite empire, a plot element that mirrors Goku’s origins on Dragonball Z.

It isn’t this largely predictable reasoning that makes “Where I Really Come From” tick, however, but Mark’s reaction to it and the battle that follows. As we’ve been theorizing all along, this season would naturally end with Mark taking on his father but what no one could have guessed was how painfully brutal the battle would turn out to be.

As Omni Man teaches Mark one painful lesson after another, thousands of civilians are killed in the process. One thing that has made Invincible stand out from the jump has been how it handles the true horror of a disaster and the bloody civilian cost of conflict in a well-populated area. The first we see of it in the finale is Mark inadvertently causing dozens of deaths after he is hurled to the ground in a Chicago street. Unfortunately, this is just the appetizer for the carnage that Omni Man is prepared to unleash to make his point.

Determined to show Mark how pitiful and useless the human race is, Omni Man launches a massacre unlike anything ever seen in television history. It’s hard to believe that Invincible is still so capable of shocking us with its horrific depictions of violence. Still, this finale shows that we’ve got more nasty surprises headed our way as this story continues. The gut-wrenching centerpiece has Omni Man holding Mark up as a subway train comes careening toward him. Mark is forced to watch from this terrible vantage point as hundreds of people die bloody, needless deaths while the train breaks around him.

The cruelty of it all doesn’t end there, though. Finally, Omni Man decides that Mark must die if he will not learn the heeded lessons of his Viltrumite heritage. Another record-setter in how far Invincible is willing to go comes here as Omni Man beats Mark within an inch of his life. His body is shattered, his limbs are broken, and he can barely sputter an answer to his father’s questions about his ageless body.

“I’ll still have you, dad,” Mark answers when his father asks him what he will do when everyone he knows is long dead. It’s the emotional center of the episode, and ultimately it makes Omni Man reconsider his actions, even as he flies off into space to rejoin the Viltrumite empire. From here, a series of epilogues begin the process of wrapping up season one of Invincible while preparing us for the future of this series.

It’s honestly impeccable how well the beginning aspects of earlier episodes, disparate as they may have seemed, loop back as the story wraps up its first chapter. With what we see in the final montage of this first season, we have a lot to look forward to as we await the next leg of Invincible. Honestly, it can’t come soon enough. We hope to see the next season of Invincible, and its incredible cast in 2022.

The Top 10 Heroes of Invincible

Invincible S1, E7: “We Need To Talk” is One of the Best Episodes of Television in Years