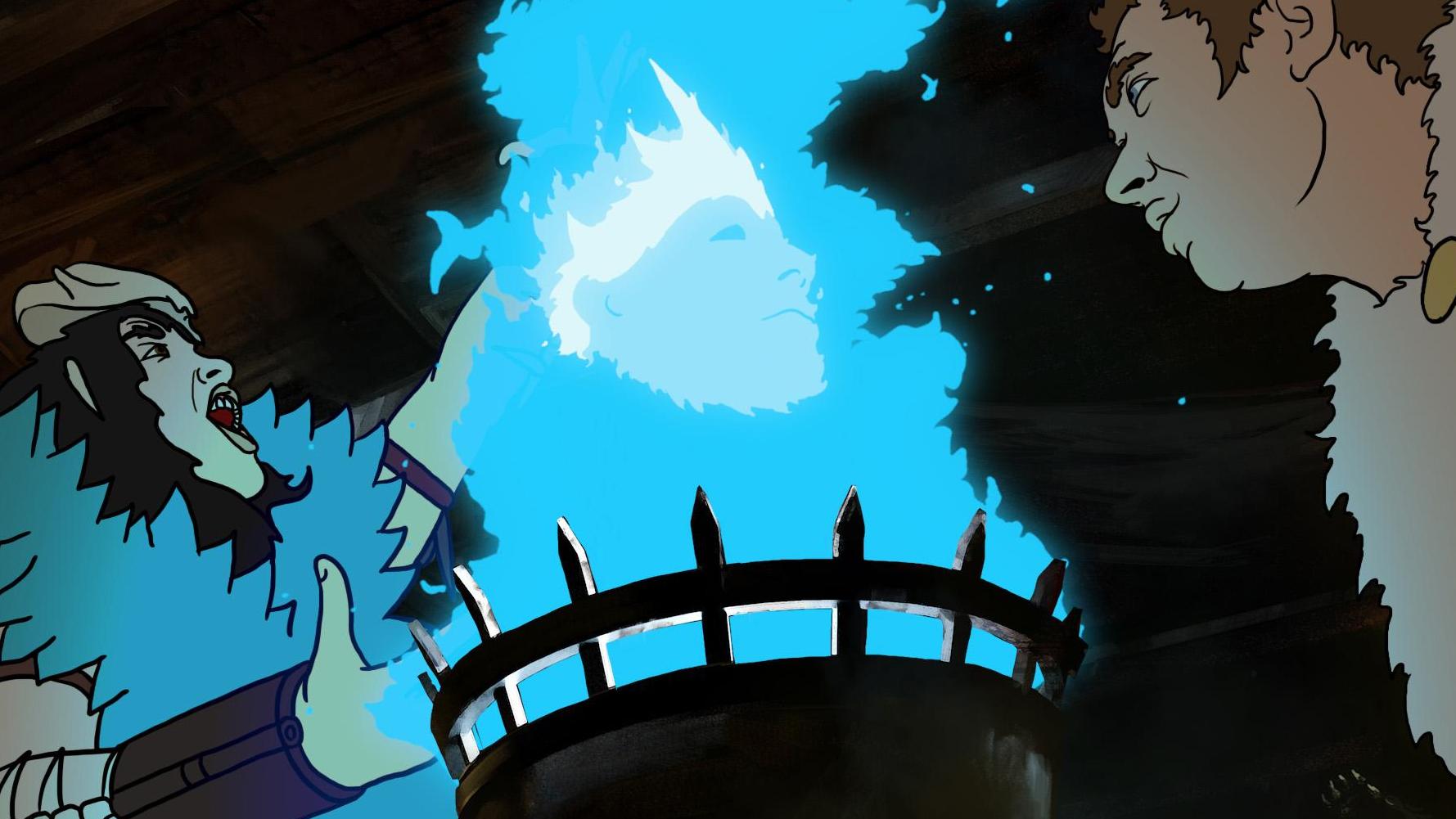 If someone had designed a movie in a lab to be the ultimate crazy midnight movie, The Spine of Night might have been what they created. It’s an animated rotoscoped fantasy film full of chiseled warriors and naked witches and copious, stomach-churning gore, about a luminescent blue flower that gives people superpowers and reveals the secrets of the universe. Yet The Spine of Night somehow manages to be incredibly ugly and meandering, full of uninspired vocal performances and a story that could never be improved no matter how much weed you consume. The movie reportedly took seven years to produce, and one might wish the filmmakers had kept that detail to themselves, as it just seems sad that they wasted so much time on this dreck.

The film opens with the witch Tzod (Lucy Lawless) trekking up a snowy, wind-swept mountain as she approaches a skull-shaped cave with piercing light emanating from its mouth. She makes this perilous journey while completely nude aside from a strange necklace and her long hair, though the elements never seem to bother her. Inside the cave is a masked figure simply known as The Guardian (Richard E. Grant), who keeps watch over the luminous blue plant, called the bloom. The Spine of Night seems like it’s about to take off at that moment, but the momentum is sucked up when Tzod breaks into a story about her generations-long journey to the bloom. The rest of the film will be told in episodic flashbacks, sapping it of any forward motion and allow the mind to wander.

Tzod reveals that she was once the owner of the bloom, which was a shawl-like bush that she wore around her shoulders, using petals from it to cast spells. But after the ambitious warlord of a run-down town (Patton Oswalt) has her followers slaughtered and imprisons her in order to learn the secrets of the bloom, it falls into the possession of a scholar named Ghal-Sur (Jordan Douglas Smith) who is driven insane by its power and the potential for limitless knowledge. Tzod exits the picture at the point, to be replaced by a conveyor belt of unmemorable characters, each who come in contact with the bloom and Ghal-Sur. The Spine of Night constructs its story as if we’re supposed to care about any of these subsequent characters, but they’re completely flat, with nothing to make them memorable. Despite being barely over 90 minutes, it feels interminable after half an hour thanks to the endless parade of nonentities.

The story is bad enough, but the animation is atrocious. There can be charms to low-budget animation, particularly when it’s drawn by hand, but there’s little visual intrigue to the images. The backgrounds are flat and muddy, despite having had seven years to work on them and a fantasy subject that would seem perfect for imaginative vistas. The character design is uninspired, ugly, and simplistic. Sometimes ugly things can be stylistically necessary, but the film doesn’t give off the vibe that the characters are meant to look terrible. The characters were created via rotoscoping, in which a filmed live-action image is drawn over to create an illustration. The technique almost always looks terrible (check out the horrifying skeletal faces in the old Porky Pig cartoon Old Glory from 1939), though it has been used to artistic effect every once in a while (see A Scanner Darkly). The movie’s copious violence might have been its saving grace if it went all out for the kind of comically baroque gore that a show like Metalocalypse used to revel in, but the filmmakers don’t push it enough to be fun. There’s plenty of blood, but it becomes numbing over time. The Spine of Night could have been a fascinating animated fantasy epic, but it sabotages itself at every step. Despite how big the story seems, there is no there there.